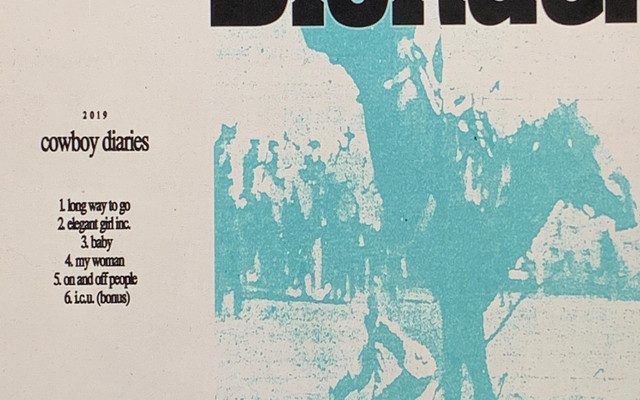 Blonder, which is the project of Constantine Anastasakis, has experimented with many
sounds over the past few years. Starting out in the alt-pop ballpark, what we see on Blonder’s most recent release, “Cowboy Diaries EP,” leaps quite drastically from that initial sound.

“Cowboy Diaries” is less heavily produced, and more experimental than the music of Anastasakis’ past. In the end, we get a beautiful little bundle of unique singles that each spin their own tale. Most of the music gives off a retro, 70s vibe while including several qualities that dominate alternative music today.

The sound on “Cowboy Diaries” ends up being much more relaxed and lo-fi and uses instruments like piano and horns that had not previously been staples of his other releases. This striking combination of the new and the old leads to a very interesting batch of singles, each with their own mood and message. The tracks are honest and intriguing in different ways.

The first single off of the EP, “Long Way to Go” starts slow and eventually bursts into a lively single, incorporating snappy bits of piano that remind you of a pianist in a hotel lobby with elements of psychedelic rock. I think that the combination of retro and modern elements is best exemplified on this track, as we get to see each work in conjunction with one another. The next song, “Elegant Girl Inc.,” tells the story of two people who fall in love while under the influence of drugs. It’s an interesting storyline with triumphant horns and other instrumentals in the background. Upbeat and exhilarating, the music matches the mood of the lyrics.

The third track, “Baby,” feels the most retro of the singles. When the single was first released, Blonder mentioned that this song was his “Burt Bacharach George Harrison doo-wop thing,” which I feel truly best captures the essence of the track. It’s a short little love song, sprinkled with smooth talking and crooning. Musically, this song is juxtaposed by the more modern, lo-fi sounds of “My Woman” in the next track. Track 4 is an emotional song about a love that you desperately want to work out, but you can’t ignore that something’s missing. It’s an honest and realistic account of love when it just isn’t meant to be. The last two tracks are similar in that they are super chilled out and laidback, but lyrically “On and Off People” is a critique and “I.C.U.” is a love song. This final duo of songs is a fitting end to the album, ending our tour of the good, the bad, the upbeat, and the toned back.

I really enjoyed this sweet, 16-minute-long EP. The songs are short and succinct, yet we get to experience a wide range of sounds across the 6 songs. The craft that Blonder has been honing over the past couple of years is really starting to take off in an interesting and unique way that I have not seen other artists even attempt. On “Cowboy Diaries EP,” we see Blonder forge an entirely unique path in alternative music, one that I am certainly excited to see more of.