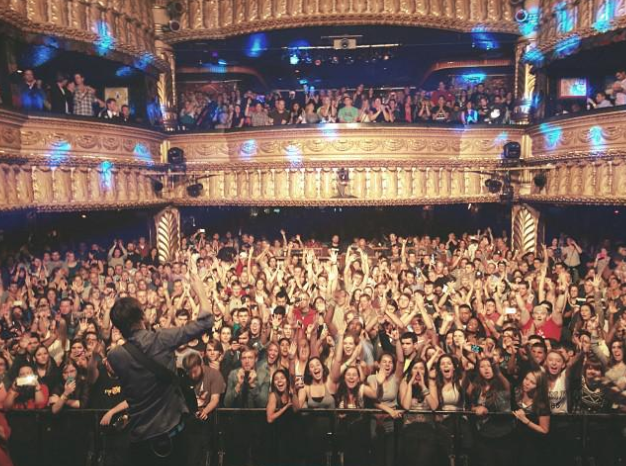 The Australian group Atlas Genius played a sold out show on October 1st at the Chicago House of Blues. Front man Keith Taylor gave an exclusive phone interview with WPGU’s own Daniel Szoke.

D.S.: Could you tell us a little bit about your hit song, Trojans?

K.T.: Well, it wasn’t the first song written, but it was the first song we put out. So we had a bunch of songs, and it was the first one where we thought, yeah, this one’s kind of finished. Cause we were very particular and also, we were a bit hesitant at the beginning to put out music because we wanted to get it right. We didn’t want to put out just anything. We had a bunch of songs we were working on, and the first one we finished was Trojans.

D.S.: Did you guys know it would be as big of a hit as it ended up being?

K.T.: We had no idea, absolutely no idea.

D.S.: It must have been pretty exciting to see it climb the charts.

K.T.: Well yeah, you write songs, and as a musician I have written a lot of songs, with the hope that people hear it. So, it’s very gratifying to have your songs be accepted in that way.

D.S.: Could you tell us about your recording process of those first few songs?

K.T.: Yeah, we experimented a lot in the studio. So, everything you hear in those songs was carefully thought about, snare sounds, guitar sounds and vocal sounds, everything. We are very nerdy when it comes to studio stuff. We experiment a lot and try and fit things together in a certain way that compliment each other, so if you’ve got a certain guitar sound, we’ll look for a certain bass sound to compliment it. It was quite a long process at times as well.

K.T.: You have a gut feeling. You might have a song kind of getting close to being done but then as your listening back there will be certain sections or certain parts where it annoys you in a way, so, that’s how you know, we need to keep working on this. And when you get the songs to a point where those feelings go away, and you just feel satisfied, you just want to keep playing it over and over. I think we know that that’s the point when it’s pretty much done.

D.S.: Have you guys started recording any stuff for your next album?

K.T.: Yeah, we are on the tour bus at the moment, so we’ve got a studio set up here, on the bus. When we are traveling, or before shows, we get a bit of time to write. I have been doing a bit of that, and then at the end of this year or the beginning of next year, we will get back in the studio and properly start working on the album.

D.S.: This is a studio you guys have set up back at home?

K.T.: Yeah, a lot of people have their own studio at home now. What we originally had was more of, well, part of a garage. It had some good equipment, but acoustically it wasn’t great, and it was quite cramped. We wanted to build something that was bigger, and that would acoustically treat it so that what we were hearing back from the speakers was accurate to what it was going to sound like and how it was going to translate. We spent a lot of time planning and building a studio that was more in line with what you would expect from a professional studio. I think that building a space like that is conducive to creating, because you’ve got everything at your fingertips ready to go as soon as inspiration strikes. Also, if it’s a nice environment, you want to be there. Just being in that studio, creativity tends to come.

D.S.: You mentioned how you are on tour now, and you guys were also at a lot of festivals this summer. I caught you guys at Lollapalooza, you had in awesome set there, you also played Sasquatch, Firefly, South by Southwest, Outside Lands, and a few others outside of the states. Did you have a favorite?

K.T.: A couple of favorites, Sasquatch was beautiful. The gorge up near Seattle was really incredible. Lollapalooza was amazing. It’s a big deal festival, so just the mere fact of playing there was pretty amazing. And we had a great crowd there, so that was nice. I think one of my favorites was a festival in Montreal called Osheaga. Because we had never played there before, we had no idea what to expect, like if the crowd even knew who we were, or if we would have anyone getting into the music. But it turned out to be one of the best festival crowds that we had all summer.

D.S.: For those of us who haven’t played at major festivals, is there a lot of interaction with other artists?

K.T.: Yeah, that’s one of the best things about it. A lot of the bands we had toured with over the last year or so were there, so for us it was kind of a party, or at least a good opportunity to catch up with those people. When you’re touring, you miss each other. So the good thing about the festivals is that there is a lot of interaction between bands.

D.S.: We are about two months out now from Lollapalooza, and you guys are back in Chicago playing a sold out show at the House of Blues, do you like playing in Chicago?

K.T.: Yeah, we love Chicago, we have played here six or seven times. Every show has been great. It’s rare to have a city where you feel like every show has been strong, but Chicago feels like that. Our fans here are great. The first time we played here was with the Silversun Pickups, and it was at the Aragon Ballroom which holds like 4,000 people, so that was a pretty great introduction to the city.