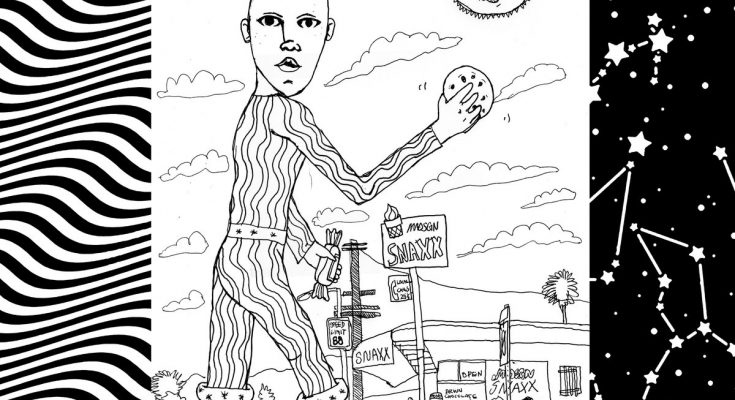 The Los Angeles beat scene is one of the most interesting areas of hip hop right now and hip hop/electronic instrumentalist Mndsgn is taking full advantage of its quirkiness. After the release of his most adventurous and conceptual album yet, “Body Wash”, I’ve been waiting patiently for the next solo project and after a few years, we finally have something. While it’s not as long and as intricately put together as “Body Wash” the LA beatmaker puts together a really solid record filled with cosmic influences and creative sampling.

The food inspired tracklist of “Snaxx” sets a lighthearted mood for the songs they represent. There’s not a lot of nuances to dig into on this release, it’s just a collection of very solid instrumentals from one of Stones Throw’s best. After hearing all the groovy, shimmering synths Mndsgn brought to the table on his and Prophet’s collaborative project “Wanna Be Your Man” I was hoping Ringo would go for a few more interesting samples over his glistening synths chords and after multiple listens to “Snaxx” I am not disappointed.

Most tracks don’t reach the two-minute mark, but on a project like this, I wouldn’t expect anything different. Each track is so mesmerizing it feels like it lasts an eternity. Switch-ups on most tracks are also a welcome surprise. Thinking you’ve gotten all you can out of a track only to have it change into a completely different, yet equally spacey instrumental is one of my favorite feelings listening to a beat tape like this. Each track always segues perfectly into the next but each track has enough character such that the album doesn’t blend together into this amalgam of similar sounding tracks.

Stand out tracks for me are easily “Browneez,” “Cashoos,” and “Papayaberry.” “Browneez” starts off with a Karriem Riggins-esque drum loop that keeps my head in a perpetual head nod for that half of the track. The second half of the track introduces a soothing soul sample that sounds just like something Knxwledge would chop up but Mndsgn opts to make it as spacey as possible. “Papayaberry” is a little more cluttered during the first half of the track but finishes off with what sounds like the theme to some interstellar mission. “Cashoos” is another example of an excellent soul sample as Mndsgn turns it into an upbeat tune meant for sunny days.

Overall this is an excellent release from one of my favorite LA producers. The nocturnal feel of the album puts you in a very heady, meditative mood, but that’s nothing new for a Mndsgn release. “Snaxx” is well worth your time if you’re a fan of spacey electronic or hip hop music, or if you just want some relaxing tunes for a long car ride. This music never fails to calm my nerves and I have no doubt you will find the same serenity in it that I do. Stones Throw has been on a roll with its latest crop of album releases and Mndsgn keeps the trend going with a collection of very well put together instrumentals.