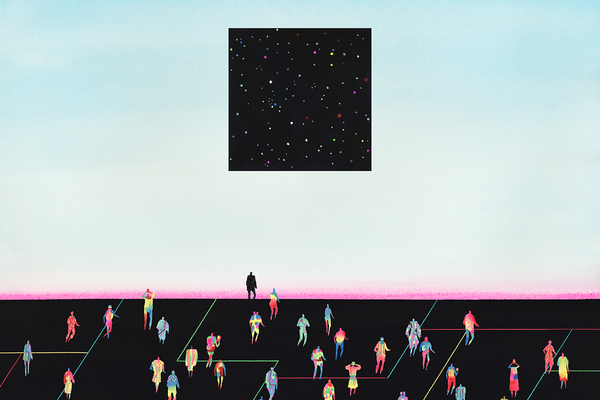 Before we jump into the specifics of this album, we’ve got to really step back and understand the depth of the pop vibes. My personal favorite song from the album is “Superposition” because of the dramatic entrance into the album. I learned the term ‘superposition’ is referring to the quantum physics of reality always being driven by some higher power that leads to the same result. It’s called the superposition principle: that all responses caused by combinations of stimuli are the same as the occurrence of just one.

Ironically, the very next song defines the contrary, “Simplify.” These songs can be considered synth-pop since Young the Giant has lead singers, but this album doesn’t ever emphasize the voices but rather the dreaminess of the songs. Moving into the “Heat of the Summer”, there’s a rocking movement of pleasure and absence of responsibility.

The album takes a dive at “Darkest Shade of Blue.” The personality of this song is like floating through space. Personally, this track holds hands with the sense of loneliness someone might feel if they were to enter their own space of darkness or apathy. The reason I enjoy this song is that there’s a letting go of beat or hype that is normally associated with Young the Giant; instead, this song reemphasizes love in times of war. This is when I understood that the album is about something much deeper than just excitement. It was about getting better in hard times. I love how the band never let that theme limit spreading some dreamy tunes.

The eighth track on the album, “Glory,” twists this darkness into a somewhat orchestrated
chant of praise to God with the only reference to self-being the main singer saying when he closes his eyes, he sees the light. Without the dark undertones, the song could easily be a worship song, but the repeated ‘goodnights’ overarches a sarcastic whisper throughout the song.

Taking a break from the songs, the voice of the main singer of Young the Giant has such a playfully jazz impression, especially when the individual sings about dancing on tables and approaching the preacher man, and of course, referring ambiguously to life events. It draws the listener to the singer, making you think, ‘why did he feel the need to sing this song?’

The ending of the album is special to me, as “Panoramic Girl” continues the dreamy sequence with the depth of the initial songs. Young the Giant puts lyrics of ‘crystal vision’ into this girl; the most beautifully put reference to Fleetwood Mac. However, the wishful thinking of this girl being only a memory that lives in his dreams is short lived as the acoustic guitar suggests a kind of brokenness to the man’s impression of the girl. This leads nicely into “You + I,” assumably referring to the same impression of the girl. This song talks about her at a party and his desire to stay depending on if she does, too. The same context goes to the house they built together, and then it goes to having grown old together. Again, the mood of the album is wrapped up in the line within the chorus, ‘there’s a reason we don’t live forever’. For this to interrupt the verses of the relationship really broke my heart.

Last but not least, the album’s title is attributed to the final song, “Mirror Master.” Fortunately, this song is officially happy. It captures Young the Giant’s typical bounce, similar to structured raunch. Sameer Gadhia actually sounds a bit cheerful in this one! If you get a chance to listen to all of the songs on this album, I’d recommend the first and last songs; “Superposition” and “Mirror Master” for the perky drop of youth only this band offers.