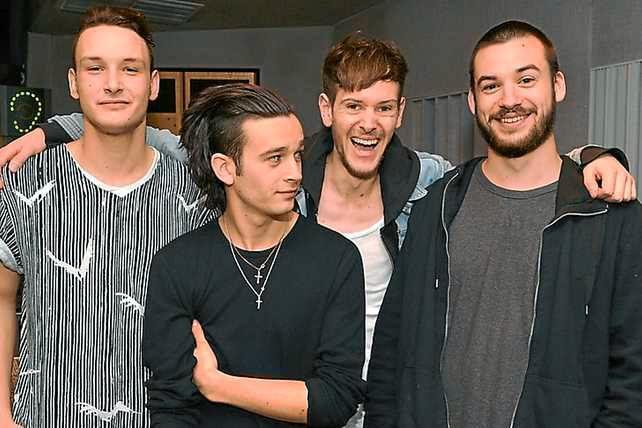 I’ll have to start out with a disclaimer; I’ve been to two of Manchester’s The 1975’s shows prior to the State Farm Center one here in Champaign. I’m kind of what you call a diehard fan. However, because I’ve had the experience of seeing them before, I was able to really appreciate the 1975’s art this time and take in everything it was – but still scream my head off.

Before the screaming commenced, opening act 070 Shake was on stage. From our angle in the seats we could see the general audience right below us and there was definitely a lack of crowd participation save for a few in the front, but I would say that’s expected of an opener of a band with such a dedicated fanbase. YesJulz, the lead singer and rapper immediately caught my attention. She was able to keep the audience engaged and interested regardless of their stiff bodies. The hip-hop/rap genre was a nice offset to the 1975’s overtly pop sound.

After the opening act, about ten minutes before the 1975 was due on stage, a steady drone started to play on the speakers (“they’re not gonna play this for 10 minutes, right?” – Emma G.) which was an effective addition to the anticipation, and then the lights went off. The room was soon lit up with the three dense columns of pure lights, and the band was off. Starting with their song that opens each album, “The 1975,” there was a moment where the whole audience sort of had a sigh of relief because this is the band we came for and they’re here, right in front of us, to perform their biggest US tour to date.

The light show to accompany the band was unbelievably beautiful. To be able to sit back and watch it for all that it was made me so content, some songs I just had to sit in amazement. Not only were there three huge columns emitting LED screens all around them, there was an enormous screen right behind the band that coordinated with them. Lights corresponded with whichever album the songs were from: black and white for The 1975 and more bright and saturated colors for ILIWYSFYASBYSUOI.

I have one word for the actual set list of the night: SAXAPHONE. I mean seriously, that guy can play and I would go as far to say that he stole the show. Why that guy isn’t officially part of the band, I’m not sure. There was an heavenly spotlight on him whenever he played which made me think is playing was truly celestial.

Lead singer Matty Healy stopped a few times to say hello, but was overall a little quiet. He did stop before they performed “Loving Someone” to do a little “go out and vote” plug, talking about Brexit from over the pond and then brought it back here to the prominence of this election. It was fun to see a band with such an impressionable fanbase using their platform.

Overall he didn’t speak much, since there was a lot of emphasis on the beauty and art of their music. They played a lot of the instrumental pieces and interludes in their albums, not just playing their main hits which created an atmosphere of intimacy with dreamlike qualities. Nothing else mattered outside the walls of the venue, we were here with the band and we’re all appreciating the same magical things in the music.