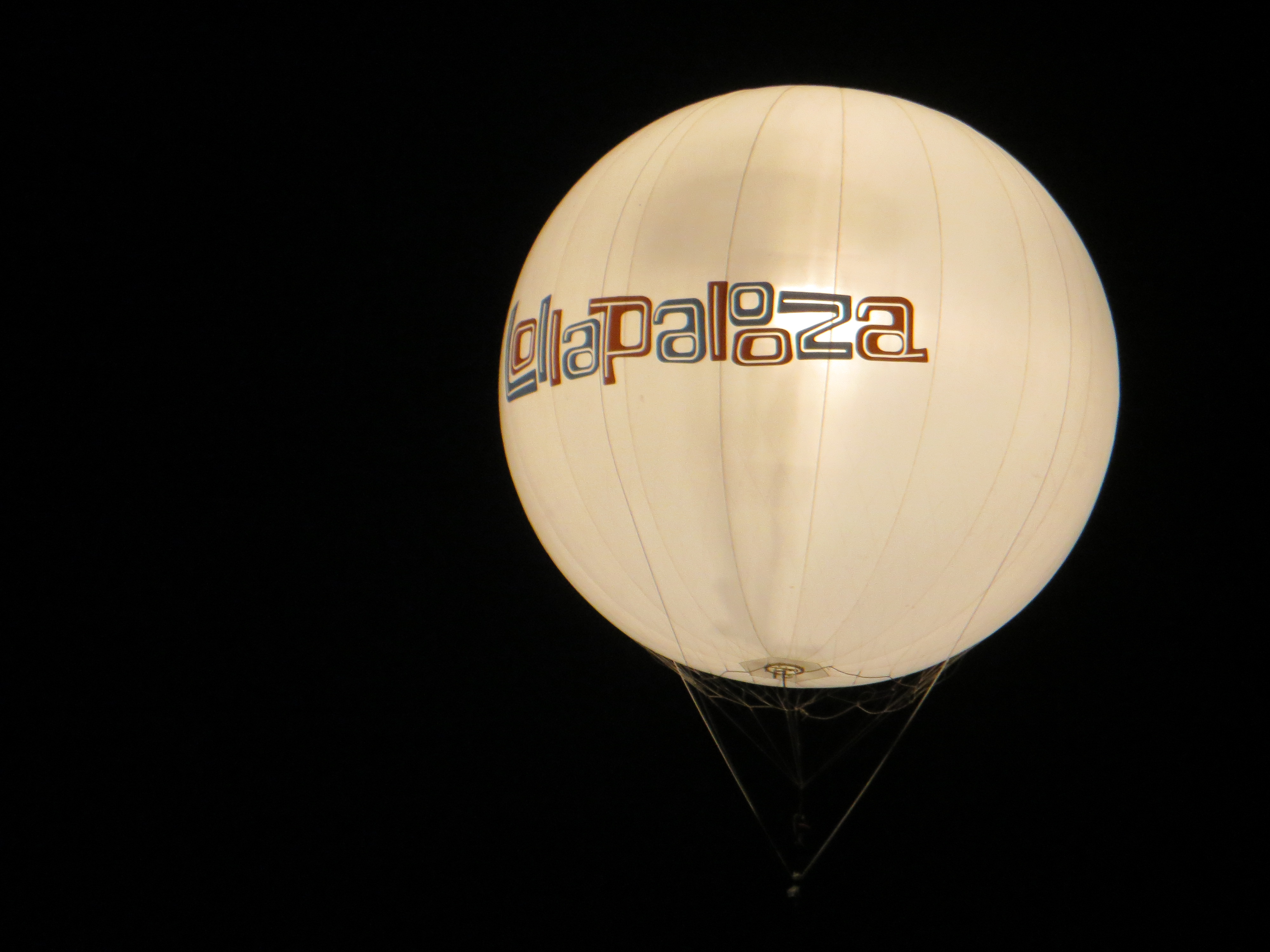 It was a sweltering day out in Grant Park yesterday, but that didn’t dampen the spirits of festival-goers.  Here are just a few highlights of all of the action taking place in the Chi-city. 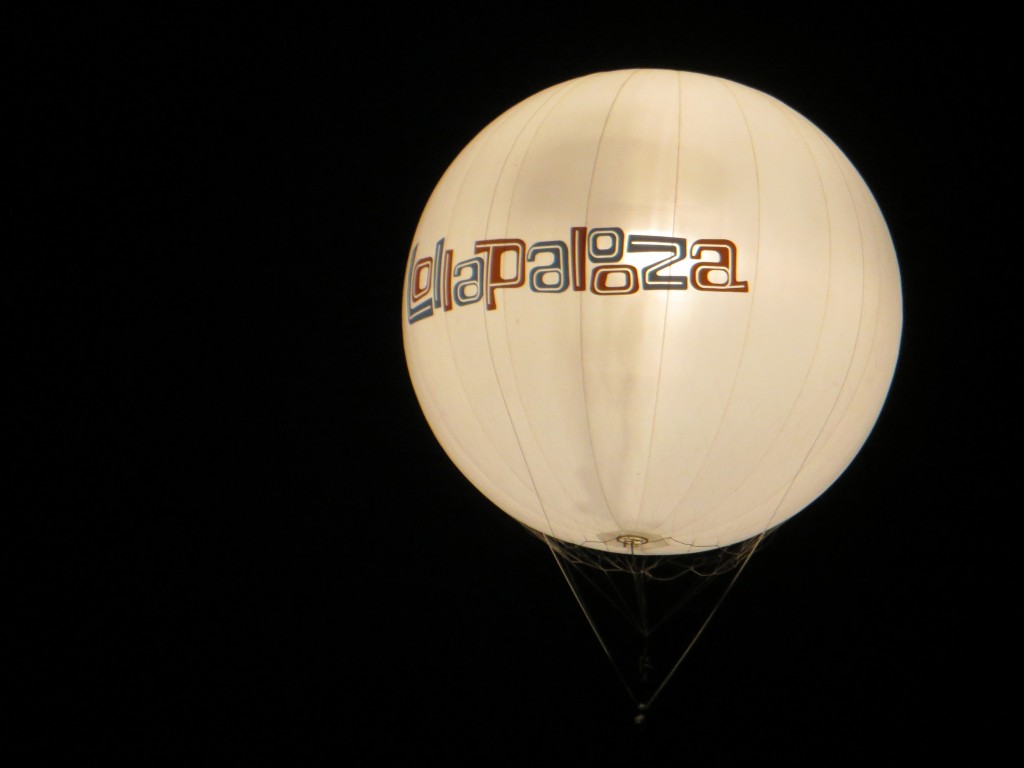 To be honest, I wasn’t going to worry about seeing a band as early as 1:30 until I arrived at Lolla. I was drawn to the Playstation Stage (also known as the Petrillo bandshell). Michael Kiwanuka, whom I had not heard of before I arrived here. I guess I was surprised when I heard him sound more like a more percussion-oriented James Taylor than anything else. His band includes everything from a more traditional drummer to a full-time bongo player. His set even included a Jimi Hendrix cover and seemed to flow easily between acoustic and electric guitars, but never veered from his laid-back and easy going charm. I would definitely look more into Michael Kiwanuka, and believe that he is perhaps destined for bigger things than the 1:30 set. 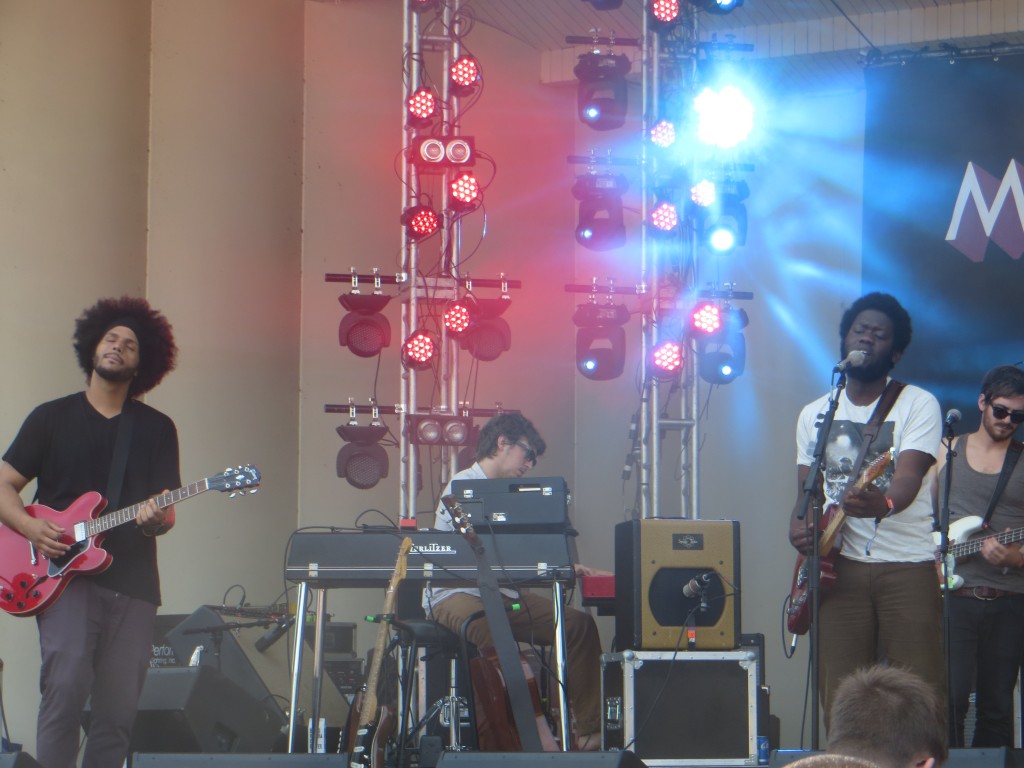 Dr. Dog is one of those bands that belongs to a great label that has produced quality before, and you know you should have listened to them before this moment. Then, their set just makes you regret your ignorance even more. You know what I mean? Maybe not. This set included favorites from new albums and the most recent Be The Void. A major turn-off, however, was that lead singer Scott McMicken wore a Dr. Dog t-shirt to perform. I know it’s nit-picky to complain about this…but doesn’t it seem selfish to wear your own t-shirt? I guess Justin Young of The Vaccines did it last year…and I was a little turned off by that also. I still like The Vaccines, though, and I think I’ll probably still like Dr. Dog too! 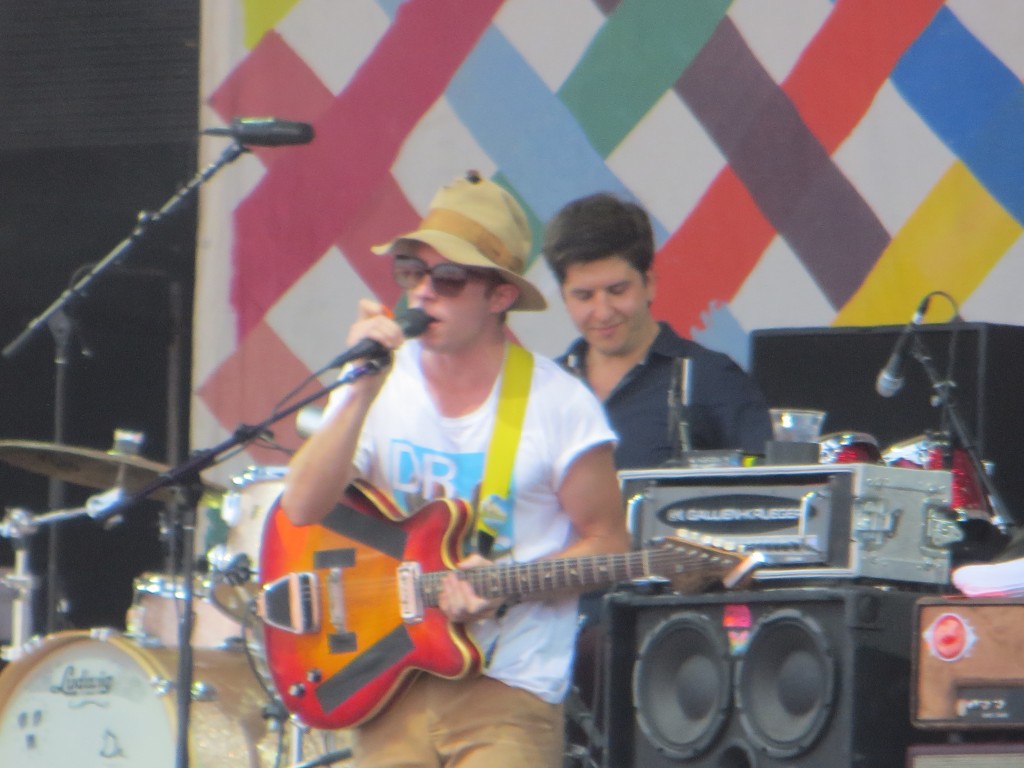 Blind Pilot was the surprising favorite of the day for me. My initial impression was that they looked kind of old up there, maybe not prepared to make as much noise as was necessary to drown out the other stages. Man, I was wrong. Blind Pilot uses an extemely diverse range of instruments. Included in this mix are an upright bass player (Just like The Avett Brothers!), a violinist, and a trumpet player. They all worked together to make great upbeat songs that everyone (literally every single person in the audience) danced to and slow, wavy songs that allowed for excellent soundtracks to naps in the forest which surrounded the Google Play stage. Like I said, I was most surprised by Blind Pilot today. 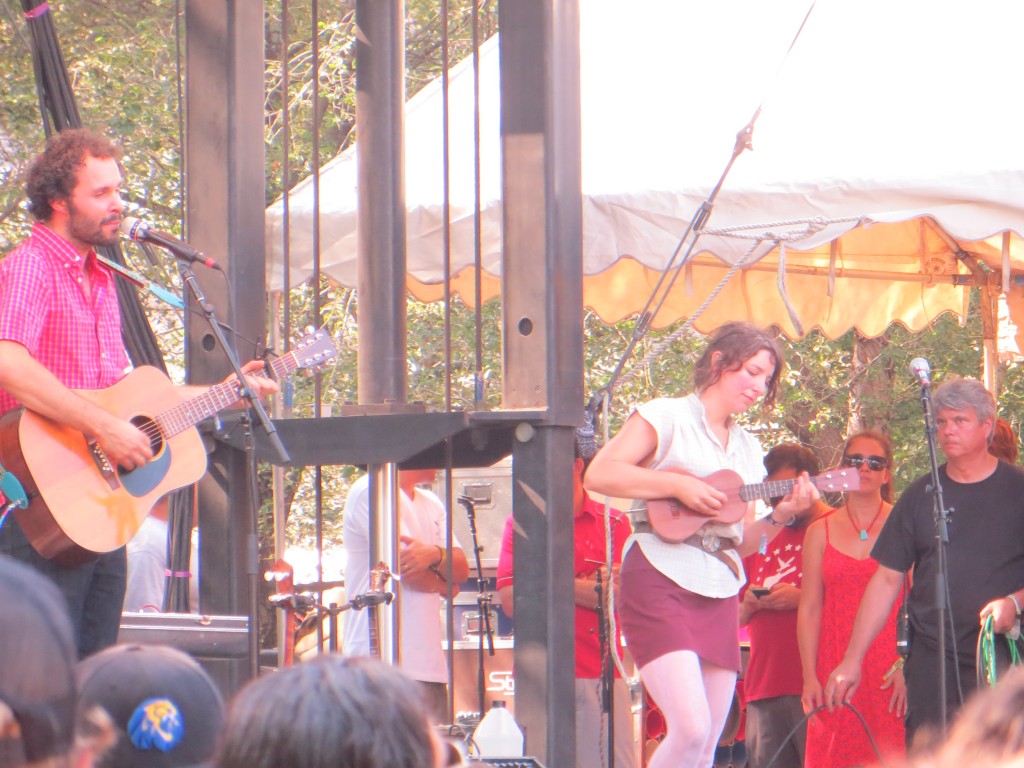 James Mercer was hanging around the media tent earlier in the day on Friday. I really wanted to get a picture with him or something, but I feared it would be unprofessional. That’s OK, though, because The Shins’ set was absolutely badass. I worried they would only play from Port Of Morrow, their highly successful album which came out this spring, but they included a set that had everything from Oh, Inverted World to Phantom Limb.  The crowd hummed along during “New Slang” in a way that would surely make Zach Braff cry on the spot (For those of you who don’t know, I am referencing his movie Garden State, which features Mercer’s Portland-based band prominently).  “Caring is Creepy,” another favorite, started the spectacular set. New hits from Port of Morrow included “Simple Song” (Which I thought would be played last, but was actually played third), “The Rifle’s Spiral,” and “Port of Morrow”.  The crowning moment of this concert was when Mercer decided to whip out his acoustic and start leading the crowd in “New Slang”, which is a classic Shins favorite, and made this classic Shins concert absolutely worth it in every way. 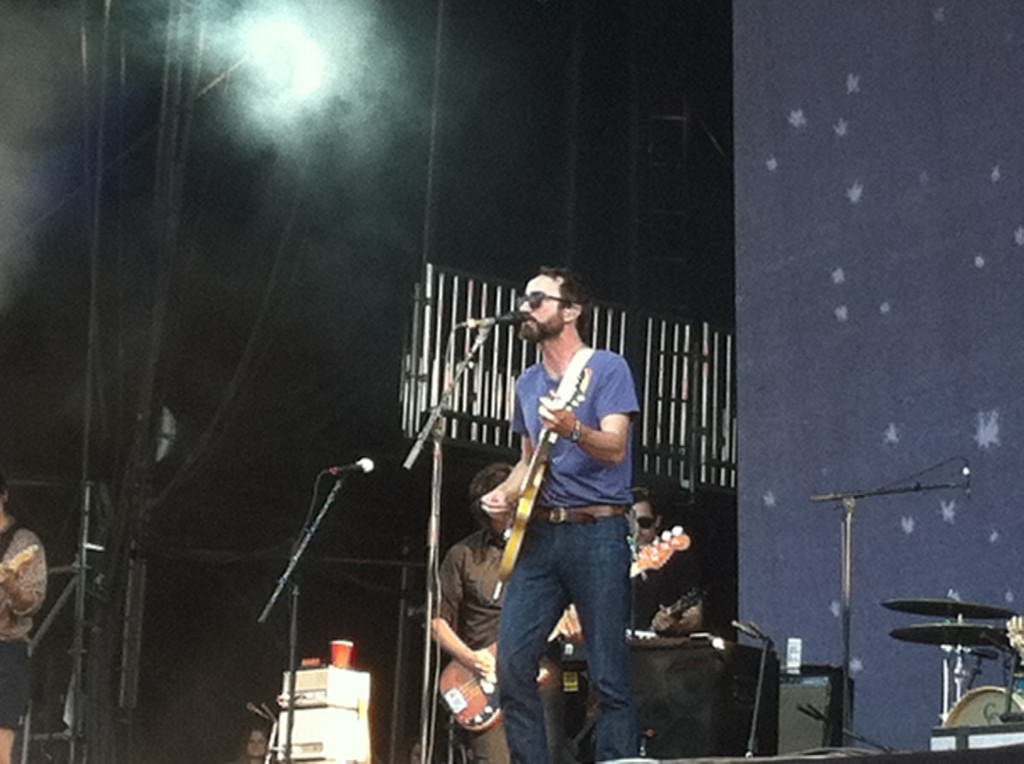 Last March, The Head And The Heart graced Urbana’s Canopy Club with a solid performance. Yet again, the indie folk-pop band delivered a very charming and upbeat set, sparing nothing for the audience. The band created an atmosphere that was light-hearted and playful, and the music was so catchy it was nearly impossible not to sing and dance along with everyone else. The crowd members were like marionettes on a string, dancing and swaying as if controlled by the band. The Head And The Heart showcased some impressive new songs and performed them with sincerity.

The Massachusetts band has grown a lot since I saw their entertaining show at Assembly Hall in October of 2010. Passion Pit started strong with their new single Take a Walk off of their new album, Gossamer. The band kept it fresh with a spiced up rendition of The Reeling from their previous album, Manners. Passion Pit performed with flair and excitement. They weaved their songs together, matching the energy of the previous song and carrying it through to the next. The audience was held under a spell. Lead vocalist Michael Angelakos was adept at entertaining the crowd, swinging his microphone around like a whip and encouraging the audience to sing along. Eventually the band slowed their pace, and they played a bunch of songs off of their new album, including I’ll Be Alright. Yes, they played Sleepyhead, and yes, it was awesome.

The atmosphere in Chicago was nearly perfect: the heat was beginning to subside, the sun was setting, but something wasn’t right. At the start of their set, M83’s sound was quiet – maybe too quiet. For me, M83 is the kind of band that gives off a chill vibe, and it’s very easy to get lost between the notes. The chattering crowd competed with the band and won most of the time. The audience’s unwillingness to quiet down at the start of the set made it very hard to focus on the music. I was tempted to wade through the sea of crushed beer cans and go to the other stage and blast my eardrums out to Nero, but I resisted. Despite the talkative crowd, M83 delivered musically. They played some well-known older songs such as We Own The Sky but focused mostly on songs off of their latest work, double album Hurry Up We’re Dreaming. As the sky got darker, the audience began to focus, and M83 blew everyone away with Midnight City. The impressive saxophone near the end of the song was even more glorious in person. Thankfully, the crowd was tamed in the aftermath of Midnight City and the show became much more enjoyable. 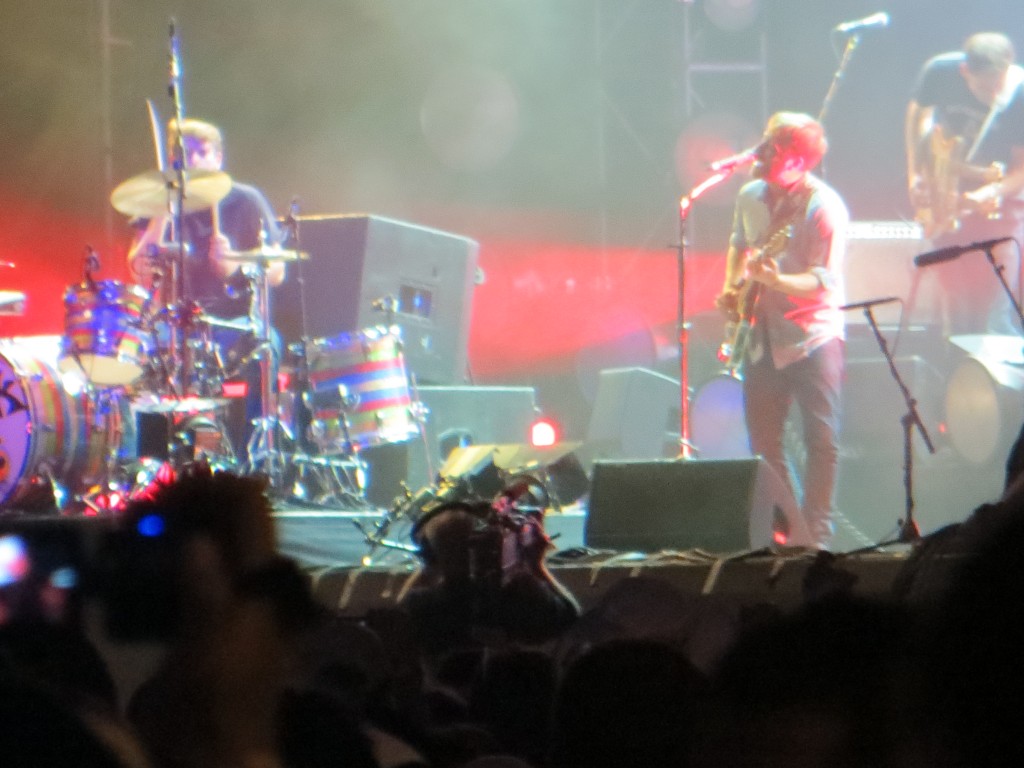 Headliners The Black Keys took to the stage with ferocity after a gratuitous amount of fog was spewed all over the stage. Guitarist / vocalist Dan Auerbach made a wry comment about the fog guy being new, and then the two-piece band tore into Howlin’ For You. Our ears were clay, and the Keys were molding them beautifully. The crowd was rocking out from the first note. Then faces began to melt once the extended fireworks show began. Luckily, my eyes remained in their sockets, and I was able to listen and watch as the fireworks, which seemed to go on forever, exploded in the sky and seamlessly matched The Black Keys’ tempo and intensity. The crowd went crazy for Tighten Up near the end of their 19 song set. The Black Keys ended strong, and the crowd left satisfied.