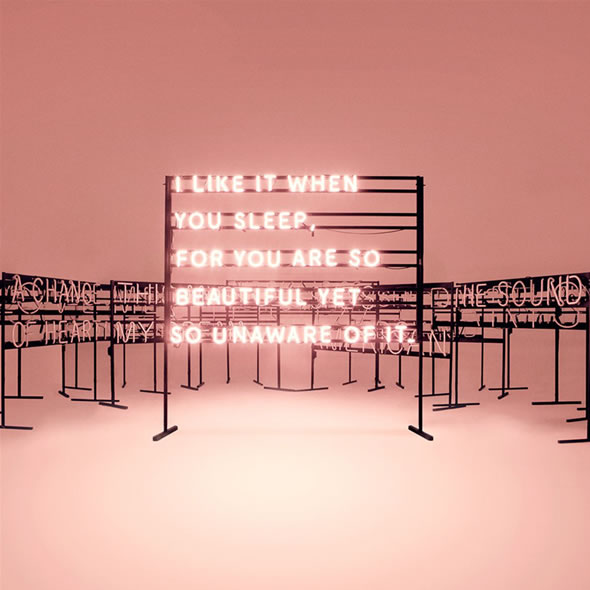 The 1975 did not create a new album, they created an experience for fans that immerses listeners in the best aspects of what already made them great. In 2013, The 1975 released their debut album to the public and carved out a nice niche for fans of their moody yet romantic songs. On their new release I like it when you sleep, for you are so beautiful yet so unaware of it, The 1975 embraces everything that makes them so uniquely dark and dynamic and blends it into a sprawling 17 songs about lead singer Matt Healy’s last three years of personal experiences.

Following its predecessor, I like it when you sleep begins with a mesmerizing track titled “The 1975”. From the first song and on, this album feels like it is very influenced by the 1980s magic that so many artists are toying with today. It’s not like this is bad though; The 1975 manages to make the 1980s sound right at home within their own sound. The song “A Change of Heart” is a great example of this album’s contradictory tone of happy emotions mixed with sad. “A Change of Heart” may be about a lost relationship but it sounds like a song saying that there really is no problem. This moment on the album feels uniquely suited to be a freedom song for someone coming out of a break up.

I like it when you sleep is very comfortable with the topic of Matthew Healy’s cocaine usage as well. Songs like “UGH!” and “Paris” are so laced with stories about Healy’s drug abuse that it sometimes feels like he is still facing his demons today. Not only does he discuss what he has done but also how it has affected his spirituality. Songs like “If I Believe You” and “Nana” exhibit lyrics that indicate Healy’s wish to believe in God but instead subscribing to a middle-of-the-road brand of agnosticism.

Outside of lyrical content, The 1975 seems to have spent a lot of time focusing on their textures and sounds on this album. This album seems content to have some songs that have no lyrics but instead tell their stories through sounds and textures that are so vivid that listeners can understand the messages clearly. For example, the song “Please Be Naked” doesn’t tell its story of sexual adventure with sharp and poignant lyrics but instead uses a faint piano and background sound of a windshield wiper to let listeners in on what’s happening. Besides, a song title like “Please Be Naked” doesn’t leave much to the imagination either.

Before I like it when you sleep, I would have been able to tell anyone what I thought The 1975 sounded like, but now I am a firm believer that we are only scratching the surface of where this band wants to take us. The 80s synth pop on this album could very well be abandoned on the next album in favor of another vehicle of sound that will tell such intimate tales as The 1975 often likes to do. I for one adored this album but I also trust The 1975 to deliver to us another uniquely beautiful album of love and horror. After all, isn’t that what The 1975 is all about?