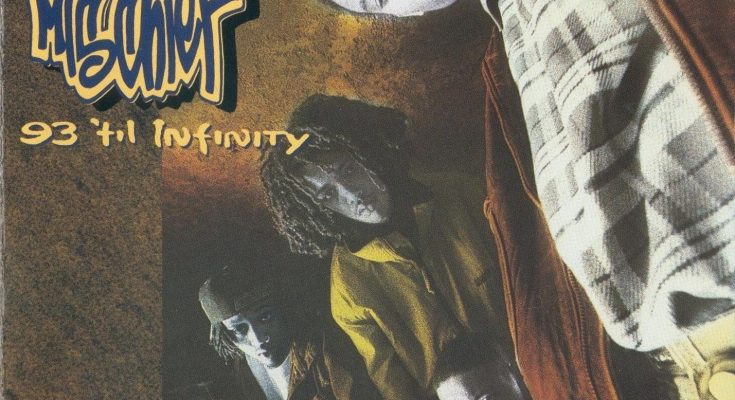 Hip hop in the ‘90s was defined by its iconic hip hop crews. NWA was the voice of the West Coast, A Tribe Called Quest were the jazzy lyricists, the Wu-Tang Clan showed us what it’s  like to be a Shaolin Warrior living in Staten Island, but only one hip hop crew really showed us how to chill. They are Souls of Mischief. This Bay Area group is made up of four members: A-Plus, Opio, Phesto, and Tajai. All members have fairly similar cadence so that no one member ever really stands out, but together the Oakland natives are up there with the legendary crews mentioned before. Their sound is summed up best in their most popular song “93’ til Infinity.” It comes off of their debut album of the same name and it sees boom-bap and ethereal hip hop culminate into some of the best music to come out of the early ‘90s.

When I was watching the music video for “93 ‘til Infinity”the first thing that popped into my head was how young the group looked. Every member of the group was 19 at the time the song was recorded with the exception of Tajai who was 18. Having such a prolific artistic output at that age and without the Internet seems like an impossible feat, but something that Souls of Mischief did without any practice. Their debut topped out at No. 85 on the Billboard 200 which is pretty impressive considering it came out the same year as landmark hip hop albums like “Enter the Wu-Tang,” “Midnight Marauders” and “Doggystyle.” As each member takes the mic they talk about your typical teenage boy topics like girls, recreational drugs, and how their crew is untouchable. And while their flows are dynamic and their lyrics are witty, but what really stands out when listening to this song is the beat.

The beat was created by the groups very own A-Plus and is one of my favorite instrumentals to come out of the ‘90s. The sample is from Billy Cobham’s song “Heather” off of his 1974 jazz album “Crosswinds” and it couldn’t have been flipped better. The airy synths just float in the background with some occasional piano notes or ambient saxophone played at just the right times. The drums in this song were also sampled and come from from Graham Central Station’s song “The Jam” off of their 1975 funk album “Ain’t No Bout-A-Doubt It” and serve to give the main sample a much needed boom-bap feel with the more organic sounding drum pattern behind it. The production is great on the whole album but this track is definity a standout and has stood the test of time as one of the better sample flips in hip hop. Overall, the instrumental is fantastic and I’m constantly amazed such a great beat was made by a 19-year-old with the very limited production equipment in available in 1993.

I found this song a few years ago when going through my “‘90s hip hop is the only real hip hop” phase and its still constantly in rotation and always one of my top played songs of the year. This song turned me on to Souls of Mischief and as well as other Bay Area hip hop that was being released at the time. If you’re a Souls of Mischief fan I would highly recommend taking a look at the rest of the artists attached to the Hieroglyphics collective. The laid back hip hop coming out of Oakland in the ‘90s has made for some of my most replayed music to date and I don’t think that will change soon. “93 ’til Infinity” might not be for everybody, but if I can turn one like-minded individual on to this song it will all be worth it.