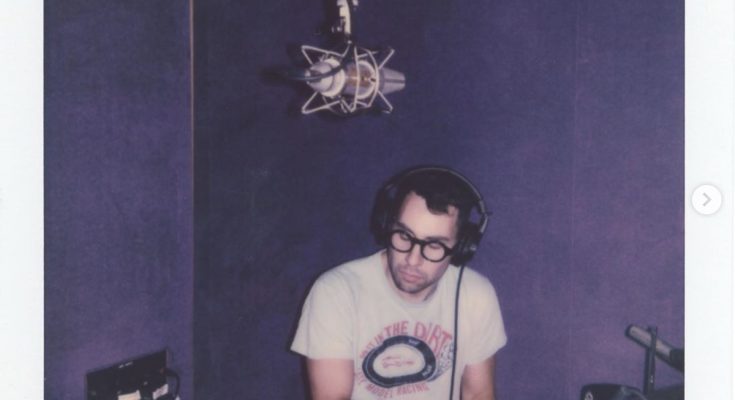 Jack Antonoff is the lead singer, producer, and writer for indie band, Bleachers. The band has released two studio albums: Strange Desire (2014) and Gone Now (2017). A third album is on the way.

Jack Antonoff is a jack of all trades, an admittedly terrible pun that holds weight. Not only is Jack the front man for Bleachers, he is also a major music producer, composer, and multi-instrumentalist. He has 13 Grammy award nominations, four of which are wins  – Best Rock Song (St. Vincent’s “Masseduction”, 2017), Album of the Year (Taylor Swift’s 1989, 2015), Song of the Year (fun.’s “We are Young”, 2012), and Best New Artist (fun., 2012). In 2019, Jack was nominated for Producer of the Year, Non-Classical for his work with Taylor Swift, Lana Del Rey, Kevin Abstract, and Red Hearse.

If you follow Jack on social media, you might be anxiously awaiting the release of Bleachers’ third studio album – the cryptic B3. Since January, Jack has hinted through his social media pages that the album will be released at some point during 2020.

Despite Jack’s sporadic hinting, we still don’t have a release date for B3. Until he (hopefully) announces an official release date, this serves as A Brief (and Incomplete) Guide to the Jack Antonoff Universe: music produced, written, and performed by Jack.

In 1999, Jack Antonoff co-founded Steel Train with Scott Irby-Ranniar (who played Young Simba in the original cast of the 1997 Broadway musical Lion King). Three years later as a five-piece band, Steel Train signed with Drive Thru Records. The band is influenced by artists such as the Jackson 5; Crosby, Stills & Nash; Bob Marley; David Bowie; the Beatles; and Creedence Clearwater Revival – covering each on their 2003 EP 1969. Between 2005 and 2010, Steel Train released three studio albums: Twilight Tales From The Prairies Of The Sun (2005), Trampoline (2007), and Steel Train (2010).

Fun. formed with artists from three bands: Jack Antonoff of Steel Train, Nate Ruess of the Format, and Andrew Dost of Anathello. Inspired by artists like Queen and Electric Light Orchestra, fun. released two albums: Aim and Ignite (2009) and Some Nights (2012). As a genre-bending indie band, fun. garnered critical and popular acclaim, topping the Billboard Hot 100 and scoring four Grammy nominations for their second album.

Red Hearse is a three-piece creative project helmed by Jack Antonoff, Sam Dew, and Sounwave (a frequent collaborator with Kendrick Lamar). The group released Red Hearse in 2019, the entirety of which was written, performed, and produced by the trio. The band states that the album’s sound is inspired by each of their hometowns: New Jersey, Chicago, and Los Angeles.

Taylor Swift needs no introduction. An artist of reinvention, she successfully transitioned from country to pop with the release of the Grammy-winning 1989 in 2014. Jack and Taylor are long-time collaborators; he is a producer on four of her eight albums, including 1989 (2014), Reputation (2017), Lover (2019), and folklore (2020). With her newest album, folklore, Taylor continues to evolve – bringing a strong alternative singer-songwriter sound (and to her fans’ delight, her first use of explicit lyrics). To learn more about Taylor’s experience with gatekeeping in the country music industry and her entrance into public politics, you can watch the 2020 documentary Miss Americana.

At 16 years old, Lorde (Ella Yelich-O’Connor) released her debut album, Pure Heroine (2013). The album resonated with young people, outsiders, and the misunderstood. The hit song “Royals” was also met with critical acclaim, winning the 2014 Grammy for Song of the Year and Best Pop Solo Performance. To fuel her second album, Lorde teamed up with Jack as a producer, releasing the illustrious Melodrama in 2017. Like B3, social media indicates that Lorde’s third studio album (L3) could be on the way in 2021 with Jack on board as a producer. Although the release of L3 is still shrouded in mystery, one thing is for sure – Lorde always seems to release an album at those pivotal points in life, during changes. For twenty-something-year-olds, we grow up as Lorde does. As her music does.

St. Vincent’s Annie Clark has been genre-bending rock and pop since the early 2000s, but she didn’t join the Jack Antonoff Universe until 2017 with the release of her fifth album MASSEDUCTION. Jack co-produced the album, and Sounwave of Red Hearse also contributed. Recorded in New York and Los Angeles, MASSEDUCTION was met with critical appraise – a Best Alternative Album nominee and a Best Rock Song winner. “Masseduction” was St. Vincent’s second Grammy. In 2014, she won Best Alternative Music Album for St. Vincent and was the first woman to win the category in over 20 years.

Lana Del Rey is an enigma; nobody can quite figure out what she stands for. In the past year, she 1) wore an inadequate mask during the COVID-19 pandemic at a book-signing event for her new poetry collection, Violet Bent Backward Over the Grass and 2) put out a(n) insensitive/tone-deaf/ignorant post stating that she shouldn’t be criticized for glamorizing abuse now that a number of artists (primarily women of color including Beyonce, Nicki Minaj, Cardi B, Kehlani, and Camila Cabello) have released music about “being sexy, wearing no clothes, fucking, cheating, etc”. Nevertheless, Lana makes A Brief (and Incomplete) Guide because she collaborated with Jack as a producer on her sixth album Norman Fucking Rockwell (2019), which was nominated for two Grammys: Song of the Year and Album of the Year.

Kevin Abstract is one of the founding members of Brockhampton, a rap collective that started producing music in 2015 and launched into the mainstream in 2017 with the release of Saturation, Saturation II, and Saturation III. Following Brockhampton’s explosive success, Kevin returned to solo work and eventually released his sophomore album, ARIZONA BABY (2019). Jack produced on the album which features a genre-less blend of alternative rock, rap, and hip-hop.

The Chicks (formerly the Dixie Chicks) are a country trio with members Natalie Maines, Martie Maguire, and Emily Robinson. The Chicks haven’t put out an album since 2006, but with Jack on board as a producer, they are back with the release of Gaslighter (2020). The Chicks’ new album was long awaited, coming after a fallout with the country music industry. In 2003, the band criticized then President George Bush and the imminent invasion of Iraq by US forces. Following the critique, right-wing journalist Bill O’Reilly, stated that the band “deserved to be slapped around” in the midst of other sexist i.e. pathetic verbal attacks. It’s clear that Jack has the women’s backs; he ended an Instagram post about the release of Gaslighter with “FUTK” and “double fuck you bill oreilly”. I honestly couldn’t agree more.

If you are still looking for things Jack Antonoff, you can catch him making a cameo in the (cancelled way too soon) Hulu series High Fidelity, which stars powerhouse Zoe Kravitz and features a glimpse of Jimi Hendrix’s Electric Lady Studios. Happy listening, and may we know more about the release of B3 soon!