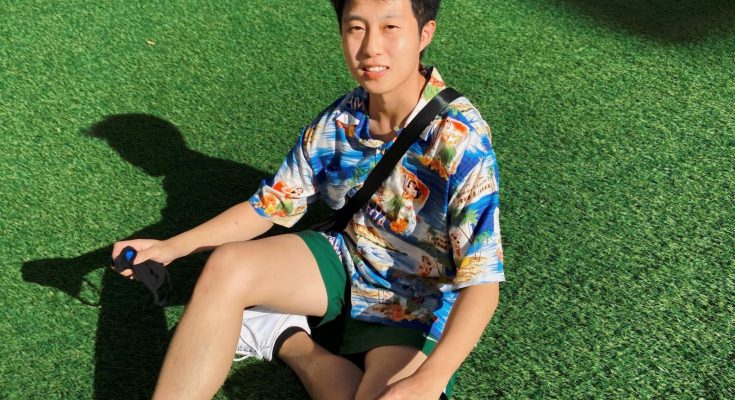 To listen to the whimsical lo-fi balladry of Naynoth is to take a journey through Anthony Nguyen’s self-imposed exile full of romantic languish and nostalgia–like dusting off an old photo from your youth.

Twenty-year-old college student Anthony Le Nguyen has always branded himself as a musician writing songs in the confines of a university dormitory, and it’s this simplistic and easy-going charm that has won over fans of bedroom pop. While the environment by which he creates is truly as modest as he sells it, the music he produces is far more expansive. Equipped with nothing more than an iPad Pro and a microphone, Nguyen shows you his world of granular synths, ear-catching melodies, and meandering vocals to create an environment that is as cozy as his own. With fresh singles ‘mean hill zone’ and ‘st. martha’ available, and plans to release more singles this year, there really is no better time to start paying attention to what this young artist has to offer.

Although he only started producing songs and assuming the moniker “Naynoth” in his freshman year of college, music has been a part of Anthony Nguyen’s life for as long as he can remember. At the age of five, Nguyen’s parents put him in piano lessons where he earned his stripes learning music theory and performance. During his childhood, Nguyen would spend hours playing his friends’ Super Nintendo and Sega Genesis gaming consoles and grew to love the soundtracks to classic video games like Sonic The Hedgehog and Super Mario Bros. This would later influence him to incorporate similar 8-bit grooves in his music (He named his song ‘mean hill zone’ after his favorite Sonic level, Green Hill Zone). Nguyen took to music throughout his adolescence, playing bass, clarinet, and saxophone at Douglas Anderson School of the Arts in Jacksonville. His time in high school was formative for the creation of Naynoth as Nguyen became inspired from listening to the likes of Nujabes, HOMESHAKE, Her’s, Temporex, and Mild High Club. He was drawn to the DIY aura of the bedroom pop genre, which would soon be a staple in his future songs.

As of now, Nguyen has released over 30 songs on Spotify, with his song, ‘I Want You’,  accumulating over 11,000 streams. He has also built a supportive fanbase at his college, which Nguyen is very grateful for. “Being able to have built a small niche community that I can interact with has been really nice and supportive,” says Nguyen. One of his closest musical friends is Jacksonville-based musician Shane Malone, who was a year below Nguyen during his time at Douglas Anderson. Nguyen started putting up music on SoundCloud during his freshman year at University of Florida and Shane, who was also writing music in high school, found Naynoth and reached out. “He told me he was starting this label called ‘Speed Demon’ and asked if I wanted to be a part of it.” Since then, Speed Demon Records has grown to include eight members, all of which have found success within their respective communities.

Nguyen utilizes a minimal amount of equipment to achieve the lo-fi grit that has grown to be so palatable to the indie scene in recent times. All of Nguyen’s music is created with nothing more than a Blue Snowball and an iPad. His self-produced music videos on his Instagram page show him using Garageband’s on-screen keyboards and drum pads to create lush and airy compositions. “I told myself I was going to get an Akai and Ableton, but never did. I just tap the software keyboard on the crammed iPad surface,” says Nguyen. During the writing process for his new single, ‘St. Martha’, Nguyen remembers the time as stressful and lonely. “I was really in my own head a lot thinking about school and the future,” he says. “So, I wanted to make an upbeat tune that was easy to follow.” Nguyen takes a moment to think. “I was in the library studying, and then I started humming the main melody. All my songs start with me humming a melody and making it real in Garageband. It’s all pretty relaxed.”

His simplistic and relaxed approach to creating is a result of music being Anthony Nguyen’s way of decompressing during stressful studies. When he’s not exercising his creativity, the biology major is studying for upcoming midterms and preparing for the MCAT. “It’s a lot of work,” says Nguyen. “Especially where I am at right now. Getting my shit together has been really wild. I used to be into gaming and streaming on Twitch as well, but ever since I decided to pursue medical school, I really haven’t had as much time.” For many artists like Naynoth, art quickly becomes an escape from a reality that grows ever more demanding and complex as the years go by. To listen to the whimsical lo-fi balladry of Naynoth is to take a journey through Anthony Nguyen’s self-imposed exile full of romantic languish and nostalgia–like dusting off an old photo from your youth. Now in his third year at university, Nguyen has four years’ worth of his own music to reflect on. The moods and tones of Nguyen’s music are a reflection of his relationships with friends, acquaintances, and his girlfriend over the years. “It’s cool listening to my music from when I was a freshman to now. You can kind of hear the phases of my life or whatever I was going through at the time.” Nguyen pauses once again for a moment of reflection. “It’s really all about the changes.”