Three years ago I went to a small venue in DeKalb, Illinois to see The Felix Culpa play with The Appleseed Cast. At the time, I had never heard of A Great Big Pile of Leaves, who also shared the bill that night. When they took the stage, I was met with some of the most fun, well-spirited music I’d ever heard. Their catchy guitar hooks rang out throughout the tiny coffeehouse as lyrics about coexisting with spiders, and skateboarding on a Friday afternoon struck my 18-year-old heart. Even though some time has passed and I’m supposed to be on the threshold of real-life adulthood, I still feel a deep connection with their pizza, beer, and doughnut gospel. Which is why I was pumped to chat with their drummer and founding member, Tyler Soucy about burgers, youth, music, and their upcoming Pygmalion show.

WPGU: Is this your first Pygmalion Fest as a group?

TS: Yeah, I don’t think any of us even as individuals have played it, so we’re pretty excited to be a part of it.

WPGU: Is there anyone in particular that you’re excited to be sharing the bill with?

TS: We’re sharing the show with The Diamond Youth-they’re actually on tour with us right now. It’ll be cool to play with those guys…Real Estate is awesome. The sad thing is, we won’t be able to stick around for the rest of the weekend, but we’re friends with the American Football guys, and Owen, and Into It. Over It. It’s kind of cool that everyone’s playing the fest.

WPGU: Have you guys ever played in Champaign-Urbana before?

TS: Yeah, we played there with The Appleseed Cast in 2011, I think.

WPGU: Do you know which venue?

TS: Uhh…is there a place called The High Dive or something like that?

TS: Yeah, I think it was that place.

WPGU: So, I first heard you guys at the House Cafe in DeKalb a couple of years back. I was going to see The Felix Culpa and…who was headlining?

TS: Wasn’t it the Appleseed Cast?

WPGU: Yeah. That was the first I had heard about you guys. The House has always been my favorite small venue to see shows and play at. I was wondering if there are any small venues that mean a lot or stick out to you guys?

WPGU: Yeah, I mean, any places your career has taken you that stick out to you.

TS: Yeah, there’s a couple of small club spots we always really love to play. There’s this place in Connecticut called The Space-me and Tucker [Yaro] (bass) grew up in Connecticut. Whenever we play there, it’s kinda like a second hometown show for us. Then there’s this spot in Tampa that we just played two days ago called Epic Problems, it’s at the Tampa Skate Park. It’s a pretty small room, but the kids always pile in and go crazy every time we have a show there. That’s probably one of the highlights always.

WPGU: Being from Brooklyn, how did the environment affect your songwriting? Were there any bands that you worked with, or that you looked up to when you were starting out?

TS: You know, I’m not sure. We always felt like we were never really part of the New York scene. Like, a lot of our friend’s bands aren’t New York bands. I think it’s just one of those things where like, I had a bunch of friends who moved down to New York right when Pete [Weiland] (guitar/vocals) and I were starting the band. So I moved down there, and just through different friends I started meeting people in bands that lived in New York. But for some reason, we never really threw ourselves into the New York scene, we never really went out and played a bunch of shows with Brooklyn bands. We’ve always liked doing our own thing.

WPGU: One of the things I’ve always really enjoyed about your music is the way it reflects youth, and the carelessness of being young, but it doesn’t really dwell on some of the more painful aspects of growing up like a lot of music does. Is that something you choose to avoid when writing your songs?

TS: Yeah, I think so. I think it’s kind of the way we choose to live our lives. I think there’s plenty of other bands already covering that, and the music we’ve always enjoyed listening to, especially Pete and I, is music that makes you feel good. I mean, there’s always different music for different emotions and different times in your life that you listen to, but we’ve always been the kind of people, no matter what kind of mood we’re in-like, if I’m in a bad mood, I still want to listen to happy music. Some people like to indulge in that feeling, and I totally understand that. But it’s the music we like to listen to, and how we choose to be.

WPGU: With your newest record (You’re Always On My Mind), there’s a lot of the same energy and fun as your previous releases, but the thing that I’ve noticed about it is that the sound is a lot bigger and fuller. What kind of direction did you want to take the record in when you were writing it?

TS: We definitely wanted to be a bit more concise with the songwriting. Cut out a little bit of the slub, a little bit of the jammy-ness and experimentation that we had in the first record. Not that that was on purpose, it was just us kind of learning how to write songs, really (laughs). The more we do it, hopefully the better we get at it. But yeah, we really want to be as concise as possible and really hone in on the important parts of it. As far as the fullness of the sound, a lot of that has to do with the producer and the mix of the record, stuff like that.

WPGU: You guys have been on tour a lot for the past year, right?

TS: Yeah, this record cycle has been fairly busy for us. We did a bunch of stuff with that band The Front Bottoms, then we went out with mewithoutYou and did a few headlining shows. We went out with this band Someone Still Loves You Borris Yeltsin-they’re like, my favorite band ever. And earlier this year we went out with Into It. Over It. and The World is [a Beautiful Place & I am no Longer Afraid to Die], which was awesome.

WPGU: How much time do you guys spend writing new music on tour?

WPGU: Your record You’re Always on my Mind has drawings of a skateboard, a pizza, a beer, and a burger. Which one’s your favorite of the four?

WPGU: I don’t know, I’d side with the pizza.

TS: I do love pizza. But a good burger with some avocado on it, some hot sauce…fantastic.

WPGU: Is there anything your fans should be looking forward to in the next couple of months?

TS: We’re going to finish up the Top Shelf Records tour, then we have a couple of college shows in the fall. We started writing our next record a couple of months before we started going out on this tour, so when we get back, we’re going to switch gears and focus on that again. Hopefully we can get in the studio before the end of the year, and if that works out, probably release something in early spring or summer of next year.

You can see A Great Big Pile of Leaves this Thursday, November 25, at 9:00 at the Krannert Art Museum as part of the Pygmalion Festvial. 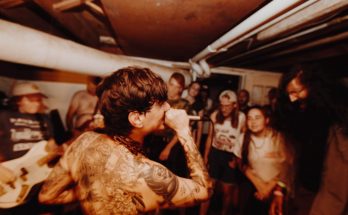 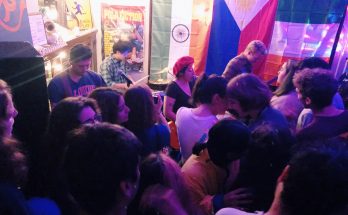