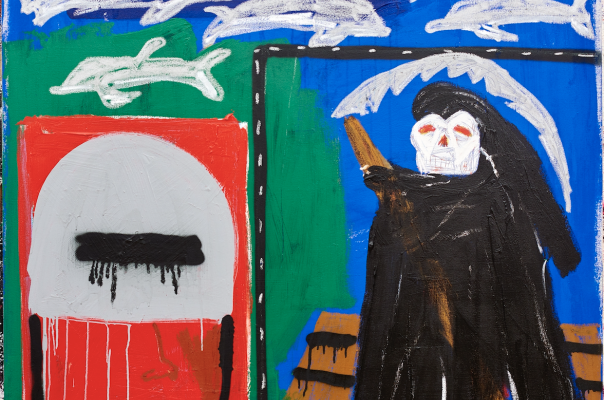 Action Bronson has been somewhat of an oddity in rap for the past decade. He does not fit the typical image of a rapper; he started off as a gourmet chef in New York City before venturing into rap. Even after a very successful major label debut album Mr. Wonderful in 2015 and many features on notable albums, he has largely remained under the radar. Many people know him from his Viceland show F*ck, That’s Delicious where he travels the world eating food. But this year, he is back with his latest album, Only for Dolphins.

Action Bronson is known for his often experimental and free flowing sound, and that certainly continues this album, maybe more so than past albums. The name of the album, Only for Dolphins, is quite literal, with dolphin chatter throughout the album and a music video for the song “Golden Eye” featuring Bronson getting advice from a muscular, intelligent, talking dolphin. It is this type of wackiness and experimentation that allows him to differentiate himself from the mainstream, or even the underground scene that is becoming a much bigger part of rap. You do not often hear rappers talking about food, dolphins, and including many off kilter pop culture references. And no other rapper can match the laid back, almost effortless rapping style that Bronson brings to every track he is on. This can be a detriment when at times it seems like he is rapping about nonsensical or unimportant things, but often it leads to an enjoyable listening experience.

If there was one phrase I would use to describe the album, it would have to be ‘all over the place’. Some of the songs give off a tropical vibe, like on “Latin Grammys”, “Splash”, and “Cliff Hanger”. Other songs are more bombastic and orchestral, with “Capoeira” and “Shredder” both featuring a sax complementing Bronson’s rapping. There are even some songs that I cannot put into any category, like “Hard Target” which features a soft piano and drum backing track or “C12H16N2” (the chemical formula for DMT, a psychedelic drug) which has a looping singing sample throughout the track. Along with the changes in instrumentation and pacing, Bronson shifts from bragging, to reminiscing on his success, and even laying down some wisdom. Even with all these different styles of beats and rapping on this album, he keeps it interesting and engaging.

As a package, this album encapsulates summer experiences like lying on the beach, driving down the highway in a convertible, and having great times with your friends. It is a great relief to listen to after a very stressful 2020 and many people not being able to experience summer with coronavirus going around. 2020 was probably the one year an artist should choose not to release a summer-sounding album, but Action Bronson did it anyway because he simply does not care. He does what he wants and releases when he wants to, and he should be commended for that. If you’re looking for a laid back rap experience, Only for Dolphins is a great new album to listen to.