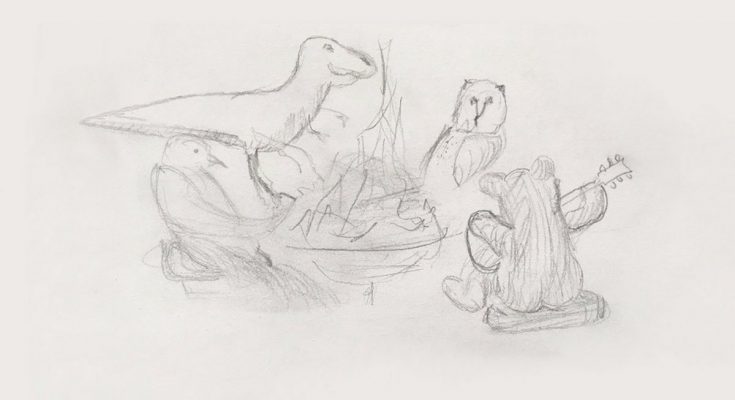 Entering our second full year of the pandemic, I think I speak for everyone by saying we are ready for a change. The world is ready to stop worrying about COVID-19 testing, end the skipping of social events, and we all long for a return to “normalcy.” But after these years of difference, what does normalcy really mean? How can we as a world, experiencing what we have endured for two years now, truly return to where we were before?

Seeking to answer this existential question along with many, many more, Big Thief returns with their first album since their triumphant 2019, Dragon New Warm Mountain I Believe in You. A double album winding over an hour long, Adrienne Lenker, leader of the quartet, and company compile an eclectic collection of “folk” music that zooms in on human emotions while zooming out on the scope of the natural world.

Beautifully opening with the acoustic “Change,” Lenker’s poignant writing reminds us that change is inevitable. Undoubtedly a message repeated thousands of times, the band’s take on the subject of metamorphosis showcases the vulnerability the musicians are willing to have with us and sets the stage for the rest of the album to come. After nearly five minutes of metaphors relating the idea of change to natural landscapes, the acoustics of “Change” fade out, opening into a cacophony of busy strings, percussive hits, and live conversations. Switching from Joni Mitchell to Fiona Apple in a matter of seconds, Big Thief makes it abundantly clear the intent of Dragon: out with the old and in with the new. Yes, there are the intimate acoustic tracks Big Thief has built their reputation on, but Dragon finds the band stepping into new territory: americana, trip hop, shoegaze, jazz, pop. When one song ends, you never quite know where you are going, but it oddly works. The connect-the-dots album style is a map of musical exploration that few artists are capable of making work.

After the lyrical geniusness of opener “Change,” it is hard to believe that Lenker could top herself. Without a single misstep, however, Lenker synthesizes lines of beauty in every song. Lyrical highlight, “Promise Is a Pendulum” is set to a simple guitar strum and sung with a deadpan delivery. Opening with “I could never build the ether or the grass overgrown/ I could never build the river with a mouth full of foam/ I could never build the winter with her cold tears of glitter,” Lenker opens up about longing. As humans with emotions, we often wish we could give someone everything. We can’t though. We can only do so much, and oftentimes this realization is overbearing. The generalizations in which she sings but the specificity of her meaning is the dichotomy which makes Lenker one of the greatest of her crafts. Continuing to showcase her detailed writing, title track, “Dragon New Warm Mountain I Believe in You” is one of the greatest explorations of the human desire to find hope. With so much going on in our everyday lives, “Dragon” finds magic in the simplest of things, and Lenker finds comfort. Her sharp writing, deeply tied into the natural world with metaphors and imagery, has never been better than on Dragon.

Not only is the band in full emotional connection with themselves, the music reminds the listener of the connection they have with each other. Wanting to frame the poetry that is Lenker’s lyricism, fellow band members play as if part of the same mind. The drum hits, controlling the tempo of each song with determination. The guitars meld into each other creating an atmosphere of warm fuzz. The strings dance lightly across the other sounds, highlighting the beauties of detail. Nothing sounds out of place. All as it should be. Nowhere is this more clear than on the first single “Little Things.” Lo-fi, yet clear enough, the instruments bend together creating an upbeat pop landscape. Singing about the small things that make everyday life so beautiful, Lenker ends the singing almost two minutes before the song is over simply to give the music a chance to move freely. “Little Things” is the sound of a band so interconnected that they can’t help but make music together.

Expertly combining the lyrics and musical genius of Big Thief, “Simulation Swarm” comes on near the end of the tracklist. Detailing the strifes of modern life, the song takes its time to show that oftentimes we long for a return; we as humans are programmed to hate change. But only through change can we truly find a place of happiness again.

As the last track ends, you can hear the studio conversation: “what should we do now?” This mundane question is the perfect way to end off the peak of their career thus far. The question is a showcase of the clarity of which this album was made. The band knew they were making the music of a lifetime. They never questioned themselves and their ability to create. This brash confidence yet humbled attitude sticks with you much longer than the hour and twenty minutes this album plays. Because of this, listening to Dragon you feel you are listening to the peak of artistic creation.