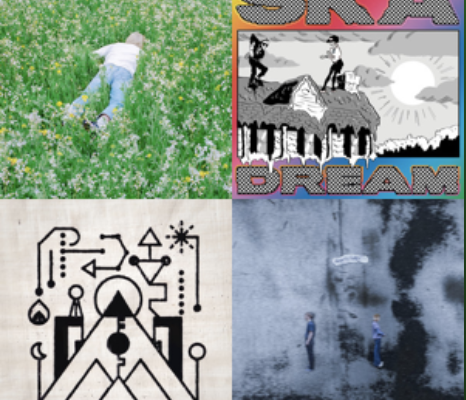 It’s been a minute! The last time I wrote one of these, it was March. I certainly have my work cut out for me, as this has been a great year for music. April delivered especially, as it was one of the busiest months of the year. Here are some great finds from the month. I hope you enjoy what you pick out from this list as much as I do!

Back in 2014, Porter Robinson’s debut album Worlds cut through the EDM’s hedonistic ethos like a knife and breathed fresh air into a scene that desperately needed it. Worlds was vibrant, uplifting, relentlessly sunny, and most importantly– festival-ready. The massive success of Worlds placed Robinson at the forefront of the EDM scene, a spotlight Robinson wasn’t ready for.

Chasing the success of his debut album turned into a fruitless task. Robinson fell into a depression over how to match Worlds, ready to quit the music business altogether. Fast forward seven years later, and Robinson has recaptured the spark. His second album, Nurture, chronicles his struggles with writer’s block and depression and the process of rediscovering the joy in doing what he loves: making music.

Just like Worlds was seven years ago, Nurture is a pure slice of sunshine. Expanding on Robinson’s sound, Nurture’s palette is wider and brighter– more organic than its predecessor. Indie records are often mired with melancholy and weighty affairs. The stakes are similarly high in Porter’s music, but it feels bold to hear an album that operates with a scale of such vivid and saturated colors, flying off the page. Check it out!

Jeff Rosenstock has quietly been one of the most prolific figures in punk this millennium. So when on April Fool’s Day, Rosenstock announced that a complete ska reworking of 2020’s NO DREAM would be released on 4/20, did anyone think he would really go back on his word? And wouldn’t you know it, the man delivered on his promise. Perhaps more impressive than its existence in the first place, however, SKA DREAM is nearly as great as the original.

Opening track “NO TIME TO SKANK” kicks off the album with a winking horn fanfare and jumps straight into the action. In its 90 second runtime, it evokes that nostalgia and incredibly danceable energy that comes with a good ska track. Then before the gag gets stale, finds a neat breakdown with a groovy organ which cuts to a shredding guitar solo.

Right then is when the realization hit me that this would be a more inspired reimagining than I expected. Throughout the album are neat reinterpretations that go beyond a standard ska imagining. “SKrAm” has a goofy rap breakdown for example, and “Horn Line” leans into the dub influences on the genre. Other songs have an altered mood altogether. NO DREAM’s manic track “Monday at the Beach” sounds loungy and relaxed now, as if it would actually be played on a Monday at the beach. “p i c k i t u p” takes “f a m e” and completely runs in a different direction entirely, ending with an impressive horn solo.

If you’re a Rosenstock fan or miss some good ska tunes, check this album out, it’s a loving homage to both the genre and Rosenstock’s fans.

Check out Brenden Nevidomsky’s review of NO DREAM here and see where NO DREAM landed on WPGU’s Top 50 Albums of 2020 list here.

After organizing on an internet forum, indie pop trio Kero Kero Bonito burst onto the scene almost a decade ago with goofy bilingual raps about dogs versus cats and shrimps and flamingos over amateur beats sampling Super Mario 64 and the SNES start-up screen.

Fast forward to this decade and the group is now one of the most sonically rich synthpop acts out there. Lead single and opening track “The Princess and the Clock” is one of the group’s most dynamic and winding songs, bridging different sections through hairpin turns like a rollercoaster.

“21/04/20,” the second track, is a jaunty stroll through a town shuttered from the pandemic. It’s a song that a year removed from the height of the pandemic lockdowns, almost feels nostalgic for a moment when we had all the time in the world on our hands. “I’m doing okay, just the usual kind of weird,” singer Sarah Perry remarks.

The final track “Well Rested” may be the most remarkable of them all. It’s a slow burning futuristic dystopian groove (almost reminiscent of a millennial take on LCD Soundsystem) with its mix full of interesting percussion and textures. It may be the most daring song the group has made and hints at the peaks the KKB of the future will scale next.

Sorry, a band out of London, are a difficult act to pin down. They build songs from catchy hooks and oddball references, then frequently obfuscate their songs with strange breakdowns and off-kilter production.

Their latest EP, Twixtustwain, is as murky as you’d expect with such an indistinguishable title and cover. Operating solely in greys and blues, Sorry have structured these five tracks from trip-hop influence, dissonant guitar licks, and their staple catchy vocal hooks. These tracks also have neat rhythm sections, with a wide range of distorted sounds like cowbells, what sounds like tongue clicks, and crunchy drum programming.

Twixtustwain is decidedly minor-key and cloudy, yet strangely addicting in its 12 minute runtime. The EP feels like a rough sketch of the potential direction Sorry could go. The desolate and chilled atmosphere of these tracks feels almost mythical in a way, like there’s a lot hiding in these songs if you squint at them. It would be neat to hear the band continue down this path, but if there’s one truth about Sorry, it’s that they’re always staying one step in front of the listener.

Here’s a list of albums that I didn’t have time to write about, but are equally worth your time!

“Uneasy is an ideal listen for a rainy, gloomy day when all you want to do is curl up by a fireplace and be lost in your own thoughts.” -Anushka Gami

The best boy band since One Direction is back. “Roadrunner is a complete

package with joy, pride, sorrow, and every other emotion.” -Ryan Flynn

Post-rock legends return with one of their most monumental albums since 2012’s Allelujah!

On Griselda member Conway’s fifth project in the last three years, he sounds hungry and versatile, as usual making countless sports references along the way.

Indie pop up-and-comers Crumb double down on their murky psychedelic sound on LP2.