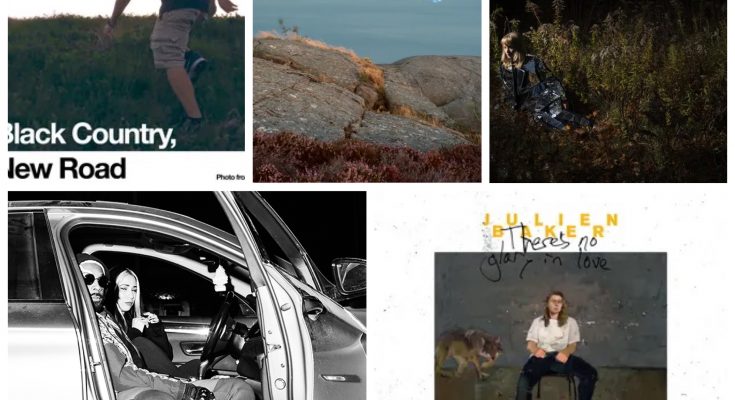 After a brutally chilly beginning of February in Chambana, a light switch seemingly flipped. Almost overnight, the snow vanished and the sun graced us with its presence. After weeks of students huddled in their dorm and apartment rooms, the quads are now adorned with hammocks, spikeball nets, and picnics. Here are the albums from February that got me through the cold and the ones I’ll be enjoying out in the sun! Hope you enjoy these as much as I do!

Black Country, New Road are an exciting new band out of London, fastening songs out of discordant riffs and lead singer Isaac Wood’s yelpy howls. Over the past couple years (partly thanks to a covid-induced delay), the group generated hype among critics and music listeners to a point of achieving a near-mythical status in some corners. Finally this month, they have delivered their debut, For the First Time.

The first thing to note is Black Country, New Road are incredibly talented. A sizable percentage of the seven-piece band are classically trained. Working post-rock, jazz, and klezmer into their sound, For the First Time has a lot of moving parts. Despite this, the record is incredibly cohesive; it never feels like one member is trying to outshine another.

At just six tracks, each song is crucial to the record, making the album feel greater than the sum of its parts. At the center of it all is Isaac Wood’s mystical yet worldly storytelling. Throughout the record, Wood leaves behind traces of a scene, like a jigsaw puzzle missing half of its pieces. Where lines like “Welcome to the best new six-part Danish crime drama” draw the listener in, the high drama of the music surrounding Wood keeps the listener hooked. When Wood isn’t stringing along the listener on some anxiety-ridden journey, the spaces between are filled with jazzy breakdowns, screeching horns, and squelching keys.

With their debut album, For the First Time, Black Country New Road have lived up to the hype and then some. Check out my track review of “Science Fair” here.

Ignorance is Tamara Lindeman’s fifth album as The Weather Station, and it’s her biggest breakthrough yet. Ignorance takes on a ridiculously heavy concept– climate change anxiety– and handles it deftly. Throughout the album, Lindeman pulls off singing about the subject matter without coming across as heavy-handed or condescending. For how much of the world has a doom-and-gloom view about global warming, Lindeman manages to sidestep cynicism and craft a record that appreciates what we have left.

Ignorance attempts to be as beautiful as the world around us, and largely succeeds. Complete with organic drums, light keys, a string section, and many production flourishes, Ignorance sounds open and naturalistic. Lindeman’s airy vocals are a perfect match for this sound. On the album cover, she dons a dress covered in mirrors, designed to reflect the nature around her. This way, she hopes to become one with nature, but she admits that being human after all, she must take from the world as well. On the stark cut “Wear,” she contemplates how she “tried to wear the world like some kinda garment” before sighing and admitting, “it does not matter to the world if I embody it.”

Nothing, however, tops the stunning opener “Robber.” Lindeman frames the destructive forces threatening our Earth as “the robber,” stating that “he had permission of words, permission of thanks/ permission by laws, permission of banks.” Similar to an actual thief, Lindeman notes “the robber don’t hate you.” As the subtle strings build tension throughout the track, Lindeman concludes, “Nobody taught me nothing was mine/ If nothing was mine, taking was all there was.” “Robber” is an incredible use of metaphor and one of the most skillful examples of songwriting in this young year. It’s a song that will surely stand the test of time, as its subject matter becomes increasingly relevant.

Despite the jump in production style, songwriting-wise Baker offers up more of the same, honing in on songs of unhealthy therapy and self-jabs. Throughout the album, some of her sharpest and most devastating lyrics crop up. “It isn’t like I do this on purpose/ I just forget the second I learn it” and “Until then I’ll split the difference/ between medicine and poison” stand out as two of the most memorable.

While many critics will dismiss Little Oblivions as Baker making generic sad indie, others will dismiss it as Baker continuing to commodify her sadness, as sad records are what her fans want. Both of these arguments don’t do Baker or her music justice, as these songs are personally afflicting for both Baker and her fans. The highlights of Little Oblivions are also among her best.

Lacerating yet catchy, Little Oblivions is a pretty great album for the night after bombing a huge exam, taking a depressive train ride into the city, laying face down in a puddle, or moping in just about any scenario where you feel like shit.

In summer 2019, Cassandra Jenkins was set to tour behind the indie legend David Berman and his album Purple Mountains. Shortly before opening night, Berman tragically took his own life. Yet Berman’s spirit lives on in Jenkins’s new album, An Overview on Phenomenal Nature. Much of Phenomenal Nature reckons with moving on from this grievous event, but the album is much greater than documenting Jenkins’ meditations on Berman’s death.

Jenkins is an incredibly observant person, and it shows throughout the record. Every song channels interactions with friends, family, and strangers into pieces of herself (or perhaps vice versa). On “Hard Drive,” she interpolates a librarian’s musings on the human mind being a hard drive with a rough road trip while getting her driver’s license. Elsewhere, she takes therapeutic advice given to her (“Baby, go jump in the ocean/ It’s cold enough to get your blood moving”) and returns it to a friend.

Phenomenal Nature is an incredibly lush album. The music here is equally as beautiful as Jenkins’ musings. It’s sprawling, yet feels small and intimate enough to fit in your pocket. It’s loving, cozy, and warm. Perhaps Jenkins’ most impressive feat is that in setting out to create a healing record for herself, she created one that’s healing for you too.

Of course, I can’t write an article about releases this month and not mention JPEGMAFIA. One of the biggest names in underground rap, Barrington Hendricks (aka Peggy) has continually evolved his sound, trying new things out and making bangers all the while. His latest, EP2!, has taken a deeper dive into a sound he’s always favored, cloud rap.

For fans of Peggy’s first EP, EP2! Is quite the curveball. Rather than being the odds and sods of last year’s project, EP2! is far more coherent, and arguably Peggy’s most cohesive project yet. For 17 minutes, Peggy sticks to exploring his fascinating take on one of hip hop’s most notorious subgenres.
The results are remarkable. EP2! tries out this new sound while retaining a somewhat similar sonic palette as 2019’s All My Heroes are Cornballs, with some minor tweakings. His new sound of choice is synthesized horns, and they add some nice texture to the EP’s smooth sound. While EP2! probably won’t be your favorite Peggy project, it’s a notable step in his growth as a musician, and definitely worth a try.