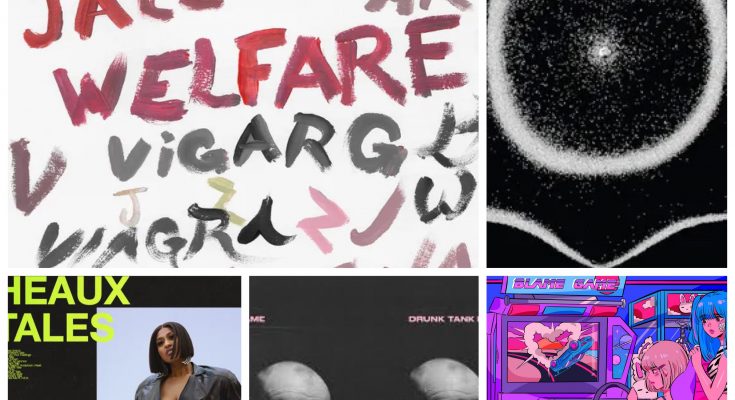 January is usually an off-season in the music industry, but as always, there’s plenty of gems out there waiting to be discovered. Here’s a round-up of some notable releases from the past month that are worth checking out! Hope you enjoy these as much as I do!

Swedish punk band Viagra Boys busted onto the scene a few years ago with the hilarious single “Sports.” With their infectious debut album Street Worms the Viagra Boys proved they were more than a novelty act. Now their sophomore effort, Welfare Jazz, has arrived.

Goofy as ever, the Viagra Boys have taken a slight sonic left turn on Welfare Jazz. A slight country tinge populates the record, as the Viagra Boys occasionally poke fun at country music tropes, most notably on the final two tracks, which include a cover of John Prine’s “In Spite of Ourselves.” There’s also a handful of danceable tracks, thanks to the killer grooves of the opener “Ain’t Nice” and single “Girls and Boys.” Cacophonous horns are scattered throughout the album, adding texture, but never drowning out the songs.

Not every experiment lands, but lead singer Sebastian Murphy’s iconic growl and witty remarks always keep the album engaging. For example, there’s one song about a secret agent dog and another about creatures eating microchips at the bottom of the ocean. At one point, Murphy literally pretends to be a shrimp, gurgling “Blub-blub-blub.” At another he quips, “Got a collection of vintage calculators/ If you don’t like it, well babe I’ll see you later.”

Welfare Jazz is thoroughly enjoyable, and one of the most fun punk albums you will hear this year. Try it out!

Song to hear: “Road of the Lonely Ones”

Sound Ancestors is the new project from the legendary beat-maker Madlib. After Madlib sent hundreds of beats to his good friend Kieran Hebden (a.k.a. Four Tet), Hebden curated and arranged them to fit an album format. As with all of Madlib’s best work, it is wildly creative and brimming with soul.

Surprisingly, Sound Ancestors almost didn’t get released. After rapper and collaborator MF DOOM tragically passed away, there was talk about delaying the project, or canning it altogether. Ultimately, it was decided that releasing the album would be a positive thing in the wake of DOOM’s passing.  In an interview with NPR, Hebden remarked, “You know, Dilla’s gone, DOOM’s gone, but Otis [Madlib] is hanging in there, going strong and not giving up. He’s actually got this new album coming out and continuing to keep the spirit of all that music.”

It truly is a blessing the album did come out though, because it is a more than welcome reprieve from the midwinter gloom currently consuming Chambana. The samples that drive the record are shards and fragments of old– they carry on a life of their own– but take on a new meaning in the context of the record as well. They serve to create a warm and kaleidoscopic environment. It feels like a celebration of music.

Song to hear: “Lost One”

Heaux Tales is R&B mainstay Jazmine Sullivan’s first project since 2015. The record is brief, running at eight songs and clocking in at just over a half hour in length. Despite this, it feels like an expansive album, thanks to a collection of women’s tales and reckoning about love and sexuality. These interludes are interspersed between each song and they tell stories of empowerment, of abuse, and of relationships good and bad. They often contradict each other, and in doing so, they paint a broad picture of many differing perspectives on what it means to love.

If this sounds like a tiring listen, well, it can be. But while it’s easy to get lost in the weight of these stories, it’s equally easy to sit back and enjoy Sullivan’s incredible voice and tight songwriting. Nearly every song on this album has been stuck in my head at some point, and Sullivan’s voice dances and dazzles over the album’s minimalist and smooth production.

Late highlight “Lost One” is particularly stunning. It pits Sullivan up against an acoustic guitar, sounding like it’s being played at the bottom of a well. The song is a plea to an ex in a relationship gone sour. “Just don’t have too much fun without me/ Don’t have too much fun,” her voice soars.

Heaux Tales is an ambitious and daring piece of work that pulls off its concept masterfully.

It’s a good time to be a London punk band. Shame, along with their contemporaries Black Midi, Squid, and Black Country New Road, are some of the most exciting up-and-coming musical acts today. The London punk scene is thriving and Shame is at the center of it.

Drunk Tank Pink, the group’s second album, marks a stark growth from their debut, amping up the stakes dramatically. For this record, the band recruited producer James Ford, notable for his work with Arctic Monkeys and Foals. With this fuller sound, the band digs deeper to create bigger hooks, more jagged riffs, and grander theatrics.

And to great effect, Drunk Tank Pink succeeds at this– but never as much as the standout “Born in Luton” and grand finale “Station Wagon.” These songs are anxiety driven stadium-sized bangers. Hopefully, these guys will be able to go on tour again soon. Their performance on KEXP from 2018 was fantastic and the songs on Drunk Tank Pink would thrive in a live setting just as well as they do on a good pair of headphones.

Wrapping things up, here’s a little bonus selection from this month: a new EP from the indie rock band Beach Bunny. After their acclaimed 2020 LP Honeymoon, Beach Bunny is back with four new tracks. Blame Game is all killer, no filler power pop, paired with scathing and powerful criticisms of toxic masculinity and society’s patriarchal structure. If you’re a fan of the band, you’ll enjoy this EP, and if you haven’t tried out their music, give this EP a go!