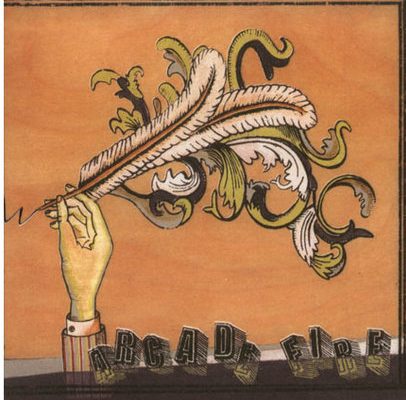 Funeral encapsulates death. Among the various life experiences, death stands as a towering monolith, capable of simultaneously expressing such strong feelings of defeat and depression, lined with streaks of hope and catharsis in a way that is universally known because, after all, everyone eventually has to meet personally with it. Indeed, Arcade Fire’s inspiration for this album were the recent deaths of loved ones for almost every member of the band. And in this way, Funeral is unique in that its perspective on dying is personal and complete, taking the form of a griefer who’s emotional response matures as the album progresses from a superficial and almost romanticized depiction of death at its beginning to a personal and an extremely sullen view at the end.

Beginning with the impersonal viewpoint, “Neighborhood #1” opens the album with a gothic and eerie melody accompanying a shrill, ghostly voice describing empty love: an Edgar Allen Poe poem in musical form. The verse melody and vocals flow together perfectly, allowing the listener to feel as if they are exploring an old, abandoned house with each beat serving as a step on the tattered floorboards and each lyric feeling as a newly discovered antique, until the continual buildup of the tempo reaches a full sprint as the fictitious couple described in the lyrics experience the end of their relationships with their friends and family.

The transition into the second side of the LP with “Crown of Love” acts as a ballad as the vague central character of the album tries to reconstruct his broken relationship with his lover, serving as a noticeable transition from the first side’s sound but while maintaining that gothic feel. Reflective of a motif that carries throughout the entire album, the instrumentation and lyrics feel as though they should sound overdone but nevertheless the melody and delivery of the slow-moving violin makes the song sound fit for a wedding ballroom rather than a pop alt-rock playlist, especially during the movement to the next song. As the guitars rage in and the background vocals break in almost to a point of a wail, “Wake Up” represents the most emotionally charged moment on the LP as well as surprisingly the most optimistic. Arcade Fire laments over aging and how failures in parents’ ability to raise us up affect us for the rest of our lives, but while also providing a welcomed breath of positivity by simultaneously celebrating the potential that we all have to change our lives for the better. If “Neighborhoods #1” is the quintessential Funeral song, then “Wake Up” is the crown jewel: the power in each guitar strum sounds strong enough to shake the earth and perfectly mirrors the emotion in the vocals, and the sudden change of pace towards the end is an elegant transition into the final songs on the album.

Indeed, the penultimate song, “Rebellion (Lies),” finishes the thought that “Wake Up” leaves the listener on, by proclaiming independent thinking from any authoritative figure by using refusal to sleep when your parents command you to as an analogy. Looking at this in the context of the final song “In the Backseat” reveals that “Rebellion” and “Wake Up” might have a “careful what you wish for” moral as “In the Backseat” describes how the main character after losing presumably her mother has to now live her life all by herself or “drive,” essentially getting her wish of living independently that is expressed in “Rebellion (Lies)” and “Wake Up.”

On its own, “In the Backseat”, is a gracefully sorrowful epilogue to the album as the speaker is able to finally accept the reality of her loved one’s death and absorb all the lessons she has taught her, while the melody gives the listener the sense of literal movement as the final seconds of the song slowly decrease in volume, as if the melody itself was a car driving away in the distance. Consequently, the entire final half of the album taken together seemingly teaches that the death of a close loved one is the true rite of passage from youth into adulthood and coping with it is one of the most valuable life lessons, providing a much more realistic and insightful depiction of loss than the apocryphal version of it in the first half.

Looking at the bigger picture, Funeral works so well as a whole because the melodic and lyrical flow of the album follows very closely a realistic flow of emotion, allowing the listener to empathize with the songs and reach some sort of catharsis. In an interesting observation of this emotional flow, the album could be seen as following the Seven Stages of Grief, and surprisingly, this observation explains the rhythmic and stylistic organization of the album. “Neighborhood #1” appears to be almost fantastical and also corresponds to Denial, “Neighborhoods #4” is intense and corresponds to Anger, the speaker in “Crown of Love” is pleading and therefore it corresponds to Bargaining, etc. This structure leads to why Funeral is so legendary: it is able to so expertly provide this magnetizing emotional journey on a beautiful melodic substrate, better than almost every other album out there. Ultimately, isn’t that what every album is attempting to do?