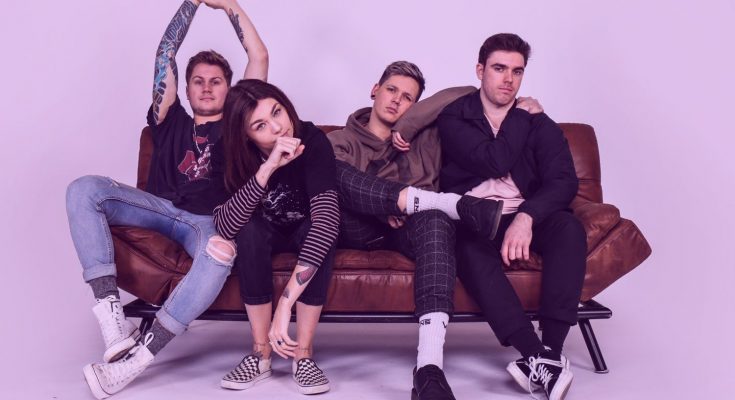 Warming up to be a popular band in the rock world, Hot Milk exploded onto the Manchester
local music scene in 2018 with a series of songs revolving around power/authority and identity.
With catchy hooks and alternating female and male vocals, they have already proven they are a
force to be reckoned with.

Hot Milk was formed in 2018 by current vocalists and guitarists Hannah (Han) Mee and James
(Jim) Shaw when they “got drunk together one night and tried to write a song.” They went on to
write more songs and sent them to people they knew in the industry with an uncertainty of the
future. This soon paid off as the pair, along with bassist Tom Paton and drummer Harry Deller,
found themselves opening for prominent acts such as You Met At Six and Foo Fighters and
performing in various music festivals all over the UK.

Their debut single “Awful Ever After” was released in early 2019 and has received positive
reviews from prospective new fans and prominent music magazines. This single was a part of
their highly anticipated debut EP titled Are You Feeling Alive, which was released in mid-2019.
This EP is not only musically and lyrically diverse, but it has demonstrated that the band knows
what they are doing. Besides this EP, they have released a series of singles that do not disappoint,
but have yet released any news about a potential album. These singles include, “June Gloom”,
“Candy Coated Lie$”, “Glass Spiders”, and more.

Though the name might make you turn away, their music definitely won’t. They have shown that
they are a band everybody needs to listen to and pay attention to. Apart from making listeners
happy and comfortable at home, they hope to “empower people” at their shows and make it feel
like a safe haven for everybody