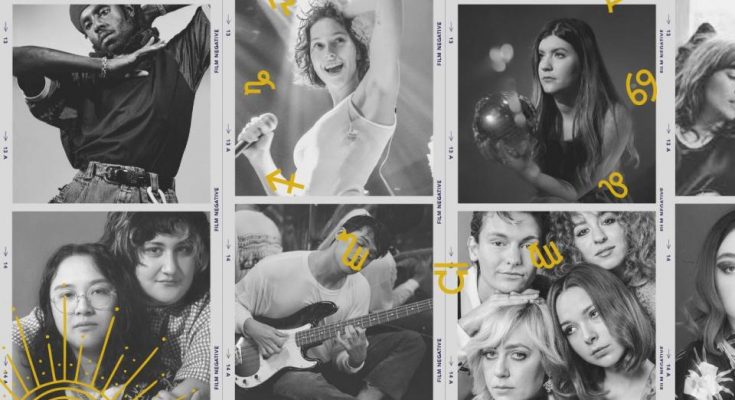 Are you tired of listening to the same old music? Waiting for the new Lorde album to drop? Well, if you’re looking for some new tunes then you should try using your zodiac sign as a guide. That’s right! You may find that you relate and enjoy listening to artists who share the same sign as you. Below I have put together a list of artists organized by their zodiac signs (bands were included based off the sun sign of prominent members/songwriters in the band). If you are an avid follower of astrology, then it might also help you to look at the artists under your moon or rising signs as well, otherwise your “zodiac” is just fine! Who knows, maybe you’ll find your next favorite artist!

Melina Duterte, or Jay Som, is a talented singer, songwriter and producer from the Bay Area that dabbles in dreamy, bedroom pop. Duterte has been making music as Jay Som since 2015 but has recently taken up a new project with Ellen Kempner (Palehound) to form the band Bachelor. Duterte’s music can be described as an intimate, dreamlike experience that draws on pop and funk sounds.

Lucy Dacus is an indie rock singer-songwriter from Richmond, Virginia. Dacus first broke out onto the scene with debut album No Burden and has released two other albums including, Boygenius, a collaboration with artists Phoebe Bridgers and Julien Baker. Dacus’s soothing vocals and rock sound have been praised over the years and can be heard in her most recent single, “Thumbs.”

Omar Apollo is a Mexican American alternative R&B artist from Hobart, Indiana. Apollo began making music through Soundcloud and gained traction after uploading a song to Spotify with money he borrowed from a friend. His long-awaited debut album, Apolonio, was released in 2020 after many singles, features, and EPs with artists including Joji and Still Woozy. Apollo makes music in Spanish as well as English and draws inspiration from artists like Prince and John Mayer.

Mxmtoon is a 20-year-old singer-songwriter from Oakland, California. She began her career by releasing music on her YouTube channel under the name of mxmtoon where she produced her own EP, Plum Blossom, after recording it on her parents’ laptop. Her debut album, The Masquerade, dropped in 2019and she has been creating ever since. Her latest release is a cover of Radiohead’s “Creep” and showcases the soothing, intimate sound of her voice.

LEO: Catfish and the Bottlemen

As our first band on the list, Catfish and the Bottlemen, previously The Prestige, formed in May 2007 by frontman Van McCann (our lovely Leo) and Billy Bibby. While a couple members were lost or replaced, the band went on to top the charts and perform at some of the world’s most famous music festivals. Pre-covid they were touring and recording non-stop, performing songs from their hit albums including their platinum-certified, debut album The Balcony.

Gatlin is a relatively new artist based in Nashville, Tennessee. She released her first EP, Sugarcoated, in 2020, and apart from her solo career she is also a member of the band Sadie Hawkins which just released a new single called “In the Dark.” If you like what you hear, a new single is set to be dropped in April, followed by another EP in June.

Song Suggestion: Talking to Myself

The Regrettes is a punk rock band based in Los Angeles led by Libran frontwoman Lydia Night. The band’s origins are complicated by changing names and the departure of other members, but ultimately Lydia Night, Genessa Gariano, and former members Sage Chavis and Maxx Morando were discovered by a representative at Warner Brothers. They debuted their first album Feel Your Feelings Fool! in 2017 and have since then been joined by drummer Drew Thomsen and bassist Brooke Dickson. Their newest project comes in the form of the single “How Am I Still Alive?” in collaboration with Lauren Hibberd.

Courtney Barnett is an Australian singer-songwriter who began her career playing second guitar for the grunge band Rapid Transit. Barnett bounced around a few different bands and projects before she released her first EP, I’ve Got a Friend called Emily Ferris and got signed to Marathon Artists. In 2013, she released The Double EP: A Sea of Split Peas where she gained international attention for the song “Avant Gardener.” Barnett crossed the Saturday Night Live stage in 2016 and has continued to create music that is witty, rambly, and unique.

King Princess is a multi-talented artist from Brooklyn, New York. She is signed to Mark Ronson’s record label and released her debut single “1950” in 2018. The single was a certified platinum success while her follow-up single “Talia” was certified Gold in Australia. Her first studio album Cheap Queen was released in 2019 and she was set to be the opening act for the European leg of Harry Styles’ Love on Tour. King Princess identifies as gay and genderqueer and stated in an interview that she aspires to be an inspiration for queer youth.

Dev Hynes, whose stage name is Blood Orange is a singer, songwriter, producer, and director from London. Hynes released three other albums before adopting his current stage name with former band Test Icicles and under the name Lightspeed Champion. He has since released four albums as Blood Orange and has written, played, and produced for artists such as Mac Miller, Solange Knowles, Harry Styles, Blondie, and more.

Benee is a New Zealand singer and songwriter who gained international popularity when her song “Supalonely (feat. Gus Dapperton)” went viral on TikTok in 2020. She released her debut album Hey u x in 2020 and won awards for Best Solo Artist, Best Pop Artist and Single of the Year at the 2020 Aotearoa Music Awards (New Zealand’s music awards). Benee’s song became one of the most popular songs of 2020 and has led her to collaborate with artists like Grimes, Flo Milli, and Kenny Beats.

Song Suggestion: Happen to Me

Lucius is an indie-pop quartet led by vocalists Jess Wolfe and Holly Laessig with drummer, producer Dan Molad, and guitarist Peter Lalish. Their debut album Wildewoman (2014) received praise from Rolling Stone and their song, “Until We Get There,” was featured in the hit show New Girl and movie If I Stay. Their last album was released in 2018, but if you’re looking for more, the band recently collaborated with the band Black Pumas on the song “Strangers.”