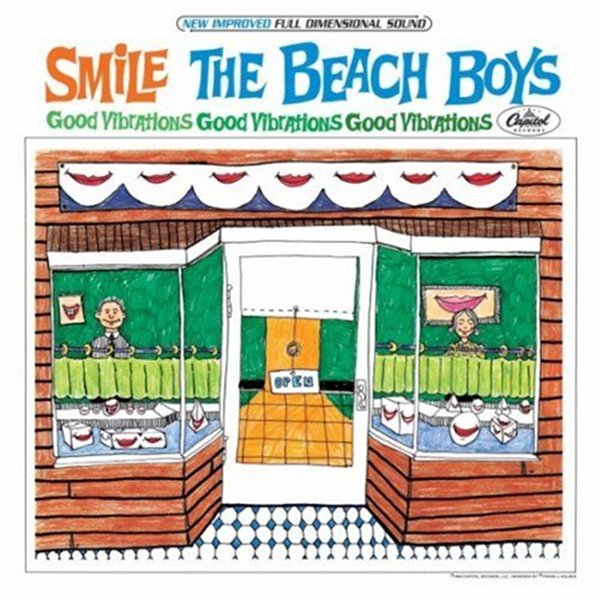 Begun in 1967, SMiLE was the Beach Boys attempt to create the greatest album of all time.  This was actually their second attempt to do so.  In December of 1965, the Beatles released Rubber Soul, which succeeded critically and commercially.  Brian Wilson, front man of the Beach Boys, was ready to record a better album.  While the other Beach Boys were on tour, he recorded the beginnings of what would be Pet Sounds, another fantastic and critically acclaimed album.  The Beatles’ album Sgt. Pepper’s Lonely Hearts Club Band was an attempt to equal Pet Sounds, which McCartney still calls one of his favorite albums (and “God Only Knows” his favorite song).  Sgt. Pepper’s Lonely Hearts Club Band is the album that many critics call the greatest album of all time—other top choices being Pet Sounds or Rubber Soul.  SMiLE was the Beach Boys’ attempt at an even better album, one that was fated never to be completed.

The sessions were fueled with the spirit of the sixties, some drugs, and a good number of smiles.  Final track on the first CD depicts Brian Wilson trying to get out of a piano with the help of his band mates, and this humorous track captures the feeling of the studio where everyone had to wear a fireman’s hat to record “The Elements: Fire (Mrs. O’Leary’s Cow).”  The extreme precision which was taken with the creation and production of this album in part led to its demise, as completing it was an impossible task.

Brian Wilson has struggled with poor mental health his whole life, and combined with the effects of LSD and other popular drugs of the 60’s, SMiLE ultimately fell apart.  Smiley Smile was later released, with a number of tracks from the SMiLE sessions, but was under-produced and doesn’t compare to similarly drug-induced Beatles’ album Magical Mystery Tour.  Some of the best tracks in this set—“Good Vibrations,” “Surf’s Up,” “Heroes and Villains,” and “Vega-Tables,” most notably—have been heard before, but the context for them makes them shine like never before. Various versions of the sessions from SMiLE have been released, but this recent box set seems to be the whole thing.  More material may be released at some point, but with the plethora of demos for the top tracks on the album, it’s hard to imagine anything will hold much more than this holds.

The Smile Sessions exist in a number of selections, from a single CD to a host of CDs, vinyl LPs, and 7”s.  While all of the additional elements in the $140 box set are fantastic and illuminating for the album that never was, that is a lot of money for a whole CD of “Heroes and Villains” demos.  Music listening service Spotify will let you listen to all of this for free, and that would be a good place to start for someone interested in the whole thing.  This is a fabulous album, and first disc available for individual purchase, won’t thrill quite like a completed album, but the remnants of this album are still fantastic.