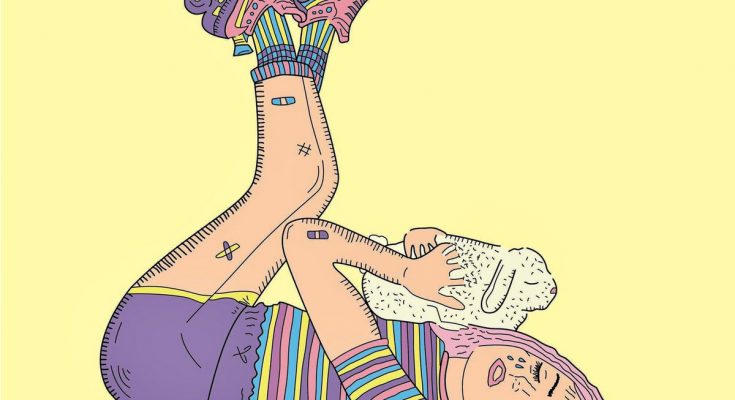 The long-awaited debut album of Beach Bunny has finally arrived! I’ve been itching for new Beach Bunny since I first started listening to the band in 2018 and Honeymoon goes above and beyond what I expected. Like any major fangirl, I immediately purchased the vinyl (a gorgeous coral blue) and have listened to it obsessively since last Friday. My neighbors either love or hate Beach Bunny and its frontrunner, Lili Trifilio, now (oops).

Honeymoon starts off with “Promises,” which is a great opener for the album. Originally meant to debut on Crybaby, Trifilio saved it for Honeymoon, which seems more fitting. While it’s meant to be a breakup song, it feels so much more confident than Trifilio’s last breakup songs. The chorus goes back and forth between loving and hating someone you used to date and demands to be sung at a high volume, making it a breakup anthem that will definitely be around for awhile.

“Cuffing Season” is an excellent follow up to the high energy “Promises,” talking about the uncertainties of liking someone. “Sometimes I like being on my own / I’m afraid of winding up alone,” sings Trifilio. Are you sure you really want to date this person or are you just afraid of perpetual loneliness? There’s no way to know for sure unless you take that leap of a relationship. Songs like this make me realize why I love Beach Bunny so much. It’s amazing to find an artist that vocalizes exactly what you’re unsure of putting into words yourself. Despite the repetition of topics of love and heartbreak, each song remains fresh due to the reality of the lyrics. This isn’t just singing about a crush-it’s pinpointing the difference between being lonely and wanting a relationship, or being so sad after a breakup yet somehow still loving the person who broke your heart. The lyrics are real feelings, making Honeymoon so easy to listen and relate to.

Since Honeymoon was first announced, there’s been a number of pre-released singles. “April” was not one of those, but I was able to listen to it when I saw Beach Bunny at Pygmalion last fall, immediately noting the familiar older Beach Bunny sound. The lyrics of “Are you out there somewhere?” and “I’ve been trying to call you / Since April and now it’s October” give me the same restless feeling from “Six Weeks” (off Prom Queen) of trying to get over someone but also not ready to let go of them just yet. In an interview, Trifilio noted that this song “talks of wishful thinking and romanticizing the prior relationship in a very grief-stricken way.” Haven’t we all done the melodramatic remembrance of past loves and relationships? “April” nails those feelings, disguising the mournful lyrics with a cheery beat.

In the midst of the energetic album comes “Racetrack,” a beautiful, poetic interlude. It’s the shortest song on the album by almost a minute and yet it stayed with me the most. The song talks about relationship insecurity and not feeling good enough for the person you’re with. It’s a new theme for Trifilio, who often sings about heartbreak and crushes, reminding listeners that insecurity doesn’t always end when you meet your significant other.

Overall, the main feeling I got from Honeymoon is confidence. In the year leading up to the release of Honeymoon, Trifilio graduated from college, played Lollapalooza for the first time, and is slowly gaining more and more popularity. It’s no wonder that this debut album oozes confidence-Beach Bunny has every right to self-assured. I’m excited to see what will happen next for the Beach Bunny crew…definitely only positive things.