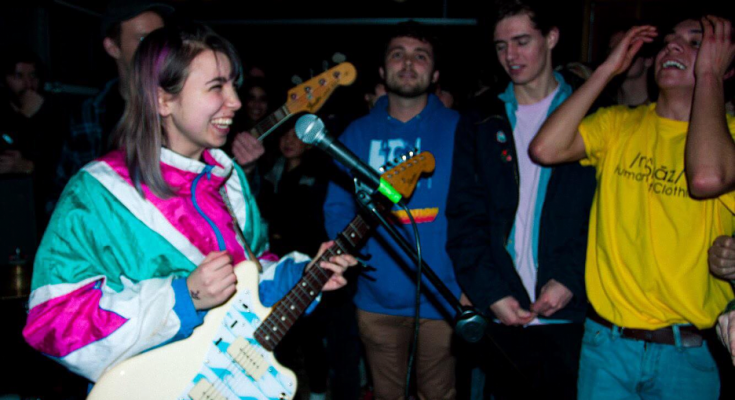 The first concert I ever went to was Miley Cyrus at the United Center for her Wonder World Tour in 2009. I was eight years old, accompanied by my mom, and so excited to stay up on a school night. I don’t remember much, except that I was very impressed by her brother’s opening act alongside his band, Metro Station. It’s funny because after the show, I made my dad download all their music on my little iPod Nano (this was when songs were $0.99) and I listened to them for weeks. You would think that Miley would have been the star of my show, but the thing is that I knew all her music. Metro Station was brand new to me and there was something so exciting about hearing it for the first time live. So, my love of live music began.

Since then, I have been to a variety of different live music events from stadium arenas, outdoor venues, and the local bowling alley. I have seen many different artists in a variety of ways, but a lot has changed since the pandemic began. I came to the University of Illinois in 2019 and was presented with new live music opportunities. There was Canopy Club, house shows, and artists that passed through Foellinger and State Farm. Doja Cat, Peach Pit, and Young the Giant were some of the big names that performed that year, but Young the Giant was the only one I saw. I was a freshman who was too nervous to explore those options and by the time I was comfortable enough to delve into the live music scene here on campus, we were told to go home.

Two years later, and I couldn’t be more excited to get back into it. Beach Bunny had performed at the first Lollapalooza I had ever been to, but a late train was all that was needed to get in the way of seeing them live. I hadn’t stepped foot in Foellinger since my MCB 150 lecture of freshman year, but I couldn’t name a better reunion. Recently, I had been going through a rough time and the stubbornly gloomy weather wasn’t making it any better. Yet, as I walked up the steps of the big, dome building, excitement began to bubble inside me. The lines were out the door as people waited to pick up their tickets and Beach Bunny merchandise.

I wasn’t sure who was going to open for them, and was pleasantly surprised to see Chicago-based band llo llo. Formed in 2021, the dream grunge ensemble has been playing shows in the CU area since the beginning of summer and has a very unique energy. They ran on stage in  their turtlenecks and blazers and warmed the crowd up with their explosive personalities.

Shortly after their set, Beach Bunny came onto the stage bearing cans of La Croix and warm smiles. A few weeks ago they were performing on the rebel stage at riot fest and now they were playing under the beautiful lights of our auditorium.

The energy of the night was a bit low, but for all the right reasons. The band comforted the crowd with their warm smiles and friendly banter in between sets, and even sang happy birthday to one of the fans in the front. Lead singer Lili Trifolio’s voice was as  smooth and mellow as their recordings. Overall, the four worked well together to make the show as intimate as a garage band and brought life to some of their biggest hits. The show itself opened with Prom Queen, ended with Cloud 9, and gave audience members a taste of new music.

After getting lost in the crowds of Lolla and watching Harry Styles from the United Center Nose bleeds, it was nice to experience live music in a chill environment. Like I  said, Beach Bunny just came back from Riot Fest and while I would have loved to get back to a music festival, the show here was an experience unique to UC. My first concert at Foellinger was a success and I loved that I was able to connect with the music and the band in a way that I couldn’t find at Riot Fest or any other chicago venue (The Riviera Theatre December 18th if you wanted to see them for yourself).

If you’re looking for a chill, intimate experience then Beach Bunny will definitely not disappoint. The show was a great experience and I can’t wait to see what other live music opportunities the CU music scene will bring as we come back together.