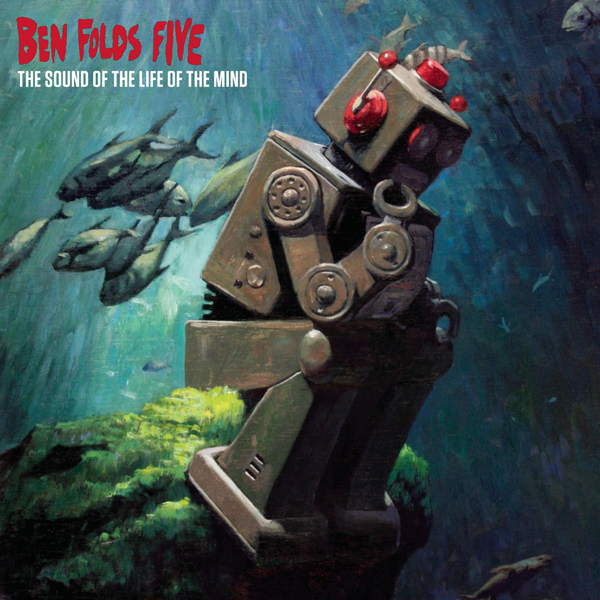 After 13 years of pursuing a fairly successful, if not diminishing, solo career, Ben Folds has reunited the world’s smallest quintet for The Sound of the Life of the Mind. The result is a remarkably bland and tired album that is really just more of the same Ben Folds that we’ve been hearing since the beginning, but without the edge, wit, or emotional depth that has become standard in all Ben Folds releases

I should state here that I have never been a huge fan of Ben Folds, but I do believe that he is a talented songwriter and an even better pianist (see “Erase Me” or “Do It Anyway”). His sense of humor has never sat well with me, lines such as, “If you’re feeling small and you can’t draw a crowd, draw dicks on a wall” just sound wrong to me coming from a 46 year old man. Yes, I realize that the song is written in character, but that brings me to another problem that plagues this album. Ben Folds tends to write mostly in character, favoring social outcasts and other rejects, but he does little to convey any real emotional depth in these characters. For example, the title track focuses on a girl that chooses to stay at school instead of going out to party like her peers; however, he does nothing but point out that the main character is different from everyone else. There is no way to emotionally connect with the main character because there is no depth or weight to her character.

Problems like these could be ignored if the music was interesting or at least different, but it just isn’t. There is little variation in song style, most are mid to slow tempoed ballads that are just a bore to sit through, though to the album’s credit the songs are arranged to keep things as interesting as they could be.

Things aren’t all bad here, though. Songs like “Sky High” or “Hold That Thought”, with its subtle vocal harmonies, are quite pleasant to listen to, even if the lyrics are slightly convoluted.

As a whole, The Sound of the Life of the Mind is a boring album with an even more tired sound that does nothing but disappoint. Ben Folds has done much better. Listen to that instead.

Check out : “Hold That Thought” here: