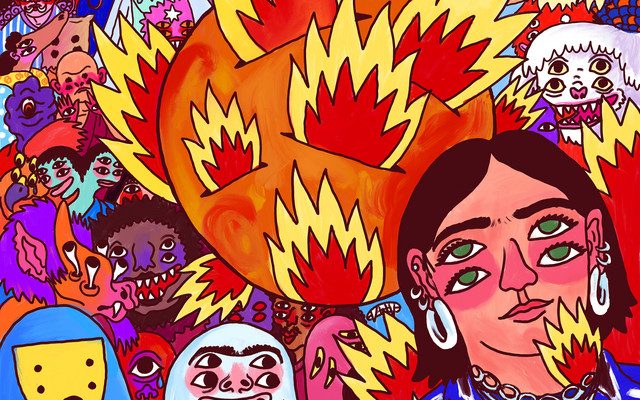 Fire on Marzz is BENEE’s debut album, released in mid-2019. The album contains the perfect mix of sad, honest music and upbeat, catchy vibes. BENEE creates a noticeably emotional and smooth EP, which is what makes it such a great album.

The groovy song, “Soaked” sets the tone of the album. BENEE sings about being so infatuated with a person that they’re all your brain allows you to think about and eventually, you lose the ability to articulate the words you want to say to them, hence the lyrics, “Soaked up in my brain/For another day/These things I’m trying to say/Get drenched and swept away.” The 19-year-old speaks to the younger generation immensely in this song, relating to teen relationships today.

After first listening to “Glitter” I decided to give the rest of the album a try. I would definitely call this my favorite pop song of 2019 because of its upbeat and joyous tone. This is the perfect song to blast in your car, on your way home from a night out with your friends, when you just don’t want your time together to end. No matter my mood, I’m always guaranteed to be happier after giving it a listen and thankfully, the rest of the album did not disappoint.

“Wishful Thinking” is definitely a highlight of this album, describing a potential relationship cut short by distance. BENEE sings about her mourning over a relationship that was inevitably doomed from the start. From the beginning of the track, the music grows louder and simply does not match her tone of voice, which is maintained at more of a quiet and relaxed pitch, ensuring she gets her point across perfectly: the excitement of starting a new relationship has been canceled out by the frustrations of the distance between the pair.

“Want Me Back” is the rawest and honest song off this album. Unlike her other songs, BENEE exudes total vulnerability and completely exposes herself in this closing track. She sings about unrequited love in which she begs to be loved and wanted, only to be left with nothing.

With the versatility that is strained throughout this short but sweet album, BENEE will no doubt reach the top of her music genre within the next year. This album provides the perfect mix of nostalgia, emotion, and good vibes, making it a go-to album for Summer 2020.

Tara is a journalism major from Southern California. In her free time she loves listening to music, finding new places to eat, and scrolling through TikTok.

View all posts by Tara Mobasher →