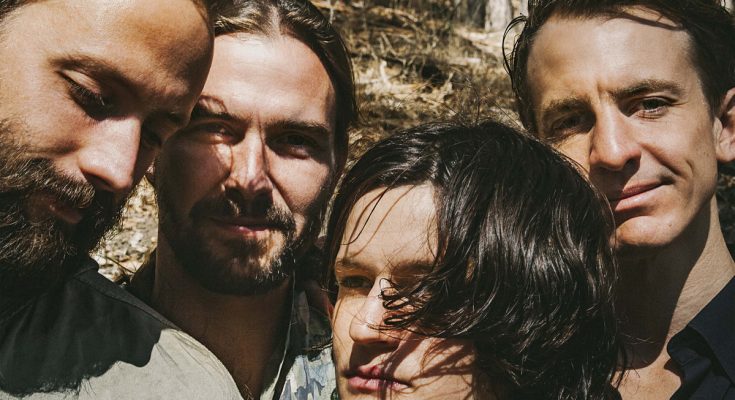 2019 has been a productive time for Big Thief who are just coming off their second LP released this year, Two Hands. Following May’s U.F.O.F., the band has referenced a companionship between the two, with the first album being “the celestial twin” and the most recent one being “the earth twin.”  The comparison is fitting; where U.F.O.F. painted scenes and images at distance, focusing on external images and a sense of otherness, Two Hands works in an opposite direction, constantly painting scenes in the present and with physicality.

The album seemingly picks up from the ethereal images that the last had left off with, “Rock and Sing” working as a camera zooming in from far out till it stops specifically with the band and their singer, Adrianne Lenker, ready to go and plugging in to play. What follows is a collage of bodies, best made clear in “Forgotten Eyes” which focuses on the absence of these parts and what is lost without them. “Forgotten eyes are the ones which we lose/Forgotten hands are the ones which we choose,” opens the song, and as Lenker brings in images of bruises and wounds the things that are not there become more physical, a presence which cannot be disregarded. You are constantly feeling the music, both when it is jamming out and when it slows down and leaves spaces to play in.

The same can be said for the band’s performance on this. Compared to the crisp and layered sounds that made up the last album, recorded in the woods of Washington, there is energy and fragility in the vocals and instruments that come out of this album’s process in the dry southwest, felt in production mostly made up of live takes with little overdubs. The work behind the music is heard in the cracks and buzzes that can be found in these songs, more real noise than in the polish and production that could be found in a lot of their discography and their previous album specifically. By the time you have gotten into the middle of Two Hands, the band allows you squeeze your way into their studio, between their drums and bass strings, and ground yourself right where the band plays.

At this point you also reach the centerpieces of the album. Though not to diminish the introductory shift into the mode of the album, the album’s gems are in the songs “Shoulders” and “Not.” “Shoulders” moves from Lenker’s voice breaking, almost begging, in a speaker that is not her own and evolving to a tone of assurance in the chorus as she examines her own body and lineage. “And the blood of the man/Who killed my mother with his hands/Is in me, it’s in me, in my veins,” she calls out, firmly grasping the knowledge of the past but knowing that does not make up her own body in the present.

If this takes assurance in what is there is not the same as what came before, “Not” is a six-minute song that carves away with negation, forming a shape continuously by what isn’t. “It’s not the room/Not beginning/Not the crowd/Not winning,” Lenker sings, and this repeats throughout this album; the physical presence is drawn out by the absence, lyrically and musically, its subject seeing themselves and memories by what was there previously or what is not there anymore. Big Thief has worked into their most physical album the lack of something there and it gives more definition to what is. By its end, Big Thief has crafted another great album that is both in line with their entire discography and builds it into something new. Having gone through the physical journey of Two Hands makes it feel even more necessary to take the external step back with U.F.O.F., but even just sitting through another listen of this album would be well worth it to hear all the parts that make this album just sit there with you.