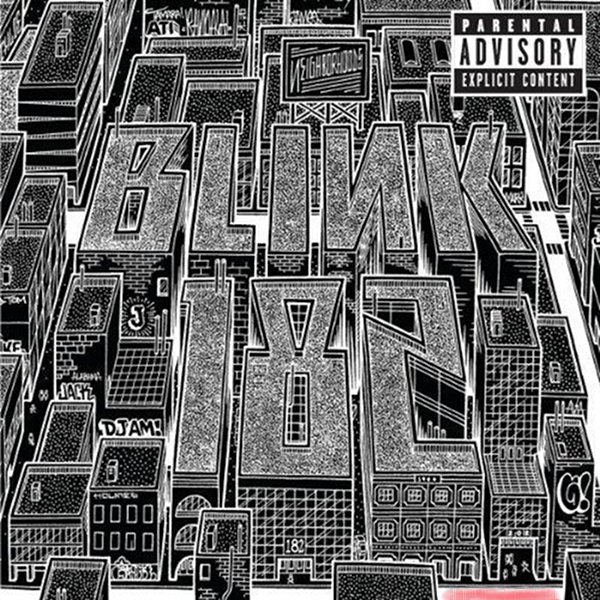 Blink-182 was a polarizing band in their heyday, angsty, childish and vulgar being which compliments or criticizes their early work. Their first studio album since their half-decade hiatus, Neighborhoods, is rather universally mediocre.  The elements which made some hate and others love their first five albums have all been lost as the band grew older and was replaced by  bland, un-exciting pop punk.

“I’m just a child inside” they claim on “Natives,” but the adolescent and vulgar playfulness which permeated their early albums is almost non-existent here.  They present nothing which makes the listener think of them as children.  Unlike their earlier albums, which featured a boatload of profanities, the few swear words that appear on this album sound out of place, like a parent trying to sound cool by swearing.  And unlike 2003’s eponymous release, they don’t sound like an older Blink-182, they sound like a boring Blink-182.

The lyrical blandness is complemented by musical mediocrity.  On “Kaleidoscope” they claim, “just play me something I can dance to/I can dance to anything you want to sing.”  The riffs and beats sound like a mix of dance tracks and pop-punk; yet, the title for this genre when it is successful is dance-punk and has a playfulness to it which maybe Blink-182 could have given us ten years ago, but is now missing.  Ultimately, the dancing that will take place with this album will be uninspired and lifeless.

“Love is Dangerous,” the closing track, carries the grandiose statement better fitting the more serious Angels & Airwaves.  “Up All Night” continuously repeats statements about “everyone,” again forcing the universality which came naturally in their earlier albums.  This album is not about the personal relationships to which everyone can relate (although many will hate the presentation) because it fails to suggest anything particularly personal.

This does not sound like a Blink-182 album, this sounds like an album made by Mark Hoppus, Tom DeLonge and Travis Barker.  Since 2003, Tom  has spent his time by playing with Box Car Racer and is attempting to change the world through Angels & Airwaves; Mark started +44 and whined about Blink breaking up; Travis decided to take make everyone happy by playing nice with both +44 and Box Car Racer.  Back in the studio together it at times feels as though they are fighting for control and there is little synergy.

The album’s title suggests the return to a place where one grew up—unlike Arcade Fire’s The Suburbs, which, while a totally different genre, was heralded as album of the year at the same competition whereas Blink-182 announced they were getting back together two years prior.  The problem is that Blink-182 was always meant to be listened to in suburban neighborhoods by angsty teenagers, and this album doesn’t really fit that demographic any more, or even who that demographic was ten years ago.  Some old fans my enjoy these songs, but if you were to make a playlist, every single one of these tracks would be passed over for something more exciting—something Blink-182 used to deliver with playful ease.