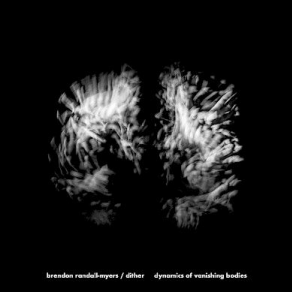 Dynamics of Vanishing bodies is the latest (and only second) album by Brenden Randall-Myers, an avante/soundscape guitarist from Brooklyn. He is joined on the album by the guitar group Dither to make a fascinating series of 5 electric guitar compositions each with their own flavors and styles. Overall, Dynamics is a truly fascinating project, but on its own terms.

We are immediately introduced to a post-apocalyptic beachscape of sharp distorted electric guitars (courtesy of the band Dither). They cycle through a three note pattern, two in perfect synchrony, followed by a third, after which the music coasts on an echo, flangers are turned up and there’s a bit of an awkward wait until the cycle begins again, like waves crashing on the beach and then withdrawing.

There are no lyrics, there is no hook, bridge, verse, it’s pretty much this basic pattern that plays throughout the rest of the song. I can easily see how this could be repetitive drudgery, and I’m sure that it is to some listeners, but Randall-Myers includes just enough

variation, just enough suspense between the waves of sound to keep you from wandering too far.

And then…. just as you become used to it, the pattern begins to morph slightly. Brendon begins to explore the expressive capabilities of the electric guitar with subtle ease, dropping pitches, textures, inexact timings, and harmonies that begin to form a cohesive sonic picture, slowly but surely growing on itself to form a much more fascinating track than it may have started out as.

Then at about 6:48 everything begins to change for real. We get a small chunk of silence to absorb, and then are back to the races, but vastly different races than before. If the first chunk of the song was building a more full sonic picture, the ending reverses that, opting for a much more minimal style. The song ends with a limp, but soothing cluster of plucked notes that echo flatly into the silence.

Auras picks up where Missing Fundamentals left off, but with a lot more energy. All of a sudden, we are faced with similar short plucks, building into a soundscape with varying note durations, quick melodic fragments, and a phasing pattern reminiscent of Steve Reich. A soothing ambience builds beneath this pattern as it develops more idiosyncrasies and variations. If the last song was a post-apocalyptic beachscape, this is definitely a post-apocalyptic ballet dance in a yoga studio.

As the track continues, the plucks become increasingly distorted, and the harmony slowly breaks down. What before was textured and almost soothing becomes dangled over the edge of an atonal oblivion– and gets pretty sus. The sounds begin building in volume, the short plucky pattern becomes less resonant, and becomes less recognizable, and the ambiance begins to ramp up without a consistent direction. Soon we are left with bells ringing seemingly at random over a lush, but foreign soundscape, blooming with urgency, but riding the line between mournfulness and ecstasy about as closely as my Math 241 grade.

As we reach the end, the ambiance has developed its own warm, organlike quality that begins to form a pattern of its own, and glows through the harsh bell-like plucking all the way through some concluding chords, and tapers into silence at last. An unpredictable, but characteristic ending, judging by the first track.

In Phantom Rhythms we get almost a combination of the first two tracks. The guitars play a semi cyclic melody of echoey plucking that resonates over suspended bell like sounds. While only three minutes in length, Randall-Myers probably intended this song to be more of an interlude, recapping the first two tracks before moving into new territory.

As the song progresses we are introduced to a set of rhythmic permutations based on the melodies and countermelodies introduced earlier on.

While definitely an interesting track, and serving an interesting purpose on the album, I wish that Phantom Rhythms was a little more dynamic. Unfortunately I don’t believe it has enough merit to be appreciated as a standalone track, and requires the rest of the album around it to make any sense. That being said, it is still a fascinating sensation to hear the small plucked notes drown in the bell-like glistening that underlies most of the track.

This track is a shock coming from the subdued bell tones of the prior one. Immediately we are greeted by fast streams of distorted guitar tones, shifting pitch and harmony every so often, reminiscent of Tuvan Throat singing (If you don’t know about it, I would definitely recommend it).

About two minutes in the reverb and echoes cut out, briefly and the sequences change up, before the monotone distorted echoes restore. This cycle repeats a decent amount, allowing room for diverse improvisation and melodic fragments that begins to bridge back to punk rock riffs. These are punctuated by harmonic sections that roll through permutations of a pentatonic scale, and more aggressive strumming. This is as close as the album ever gets to “traditional music,” and honestly I’m glad. It adds a fun vibe to the track, but also adds a lot of musical context to its sonic roots in the other tracks on the album, although none of them come close to matching the sound aesthetic quality.

At around 5:50 the echoes drop back out, and we are left with what sounds like a malfunctioning cash register in a helicopter, in the best possible sense. As the song continues, the alternating chords become populated by notes with a variety of timbres, (what feels like) a steady increase in speed, and thrumming resonances until it culminates in a very full sounding subversion, using the melodic fragments that were being cycled through as the “answer” to all of the build up, while constructing a full, driving sound behind them. After a while though, it feels like Brenden is only using the same three or four notes, and the music is going nowhere. Finally, the music dissolves into a cascade of drawn out notes, sounding like a less hard-hitting version of the first track, but extending way further until one tone is left.

The last tone in part IV transitions directly into the beginning of Vanishing Bodies, where we are introduced to a surreal underwater soundscape populated with crisp glissandos, and clean resonating harmonies, over what sounds like someone opening a soda can. No cap, this part gave me shivers. Rather than feeling timeless, you feel like time is smoothly sliding past you like those popsicles in a bag most of us ate as kids.

The ethereal soundscape condenses around 4:10, where the dynamic parts of it consist of loud pulses of different harmonies over a sustained cluster chord. It sounds like someone combined a train whistle with an accordion, but it works, no doubt due to the undulating nature of every note, the oblique harmonies, and the swelling volumes. This

general idea persists for quite a while, diversifying a little, and then in a final flourish, the track is over. While sonically it was amazing, I feel like Randall-Myers was a little lazy, and avoided creating any interesting evolutions in the music. Even so, despite its “steady state,” the track is very solid.

More insight into Randall-Myers’ musical inspo can be found on his website: “his music aims to induce trance/flow states via repetition and amplification, inspired by experiences on 20-mile runs and performing in punk and metal bands.” While I’ve never really done either, I do have experience in half marathon length runs etc. and I do understand that “state” Brendon’s website talks about– being so in pain that you zone out profoundly– and I think this speaks volumes about the idea of “Vanishing Bodies.”

There are many ways to interpret “Dynamics of Vanishing Bodies” but what makes sense to me is the idea that the loss of a loved one (a Vanishing Body) is so painful that we find ourselves becoming a passive observer of who they are when mourning- we find ourselves in a trancelike state, plunging ourselves into the loss of someone. This exploration of who they are and what they mean is inevitably bound to “come up short” through the limits of memory and interpersonal connections. This idea of “coming up short”

seems to be represented by the album art, which displays two humanoid forms, both almost unrecognizable and incomplete.

From my interpretation at least, Brenden Randall-Myers’ album is a fascinating musical exploration of the journey we all take through loss, with each soundscape seemingly its own aspect of someone or something, irrecoverably lost in the complex guitar riffing.

Dynamics is hard to review because it’s so unique. From a conceptual level it’s a deep and interesting project, but bears so little semblance to most other music that it’s hard to judge in terms of quality. Regardless, the project exudes musicianship from Dither, and incredible complexity and depth. Don’t listen to the album if you’re trying to do math homework (trust me I’ve tried), or headbang, but if you have an open mind, and 37 free minutes on your hands, I’d definitely recommend taking a listen.

Abraham Holtermann is an Engineering Physics student from the ‘burbs who enjoys going for runs, solving problems, and scrolling through Google Maps Streetview. At any given time, you can probably find him listening to his latest obsession in avant-classical, rap, jazz, funk, etc. in search of profound enlightenment.

View all posts by Abraham Holtermann →