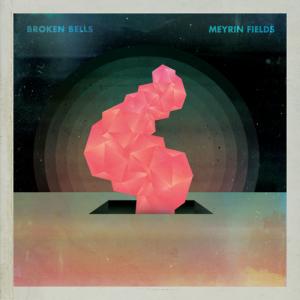 When are super-groups not a good idea?  Okay, sometimes they may turn into indulgent side projects for otherwise talented musicians, but more often they bring together different creative and artistic people and produce music that these people would not have created on their own. Here we find Broken Bells, the moniker for the collaboration between Shins’ front man James Mercer and prodigious producer Brian Burton (AKK Danger Mouse). The duo’s eponymous debut album was released early last year, and now we find ourselves with a new EP from the group entitled Meyrin Fields.

For the most part, this EP is a group of songs that are completely expected; each track could have fit well on the debut album. Meyrin Fields still sounds like what one would expect out of these two men, that is a mix of Shins’ songwriting and the mix between hip-hop and indie rock production Danger Mouse has come to be known for. The second track “Windows,” for instance employs Mercer’s falsetto to obtain the same catchiness as “The Ghost Inside” off the debut.

Although there are similarities between Meyrin Fields and Broken Bells, this is not necessarily a slight against the group. This is still a collection of four wonderful songs. Mercer and Burton are not new to this music thing; their debut was not Broken Bells testing the waters and we don’t need to wait for them to figure things out on a sophomore release, as is the case with many first time bands.  These two had all the time in the world to craft their sound and how they wanted to make music, and so here they continue the tried-and-true method that made their debut album one of the better releases of 2010.

They deliver what they do best, which is somewhere between indie folk and hip-hop, with a handful of other styles thrown in.  Perhaps the song that is most evolved beyond the debut is the closing track, “Heartless Empire.” Although it opens with a keyboard progression that sounds like any other Broken Bells’ song, it quickly falls into a sea of distorted surf-rock/lo-fi guitar noise couple with heavily reverbed vocals. This song takes the group’s outer-space sound and plants it, instead, on some sandy beach.

What Meyrin Fields accomplishes is simply this: keep people entertained until the next full-length. These are not songs that break musical barriers for Broken Bells or the world, and it is anything but a departure of any sort from the debut.  However it is a release of solid songs from a group that has yet to falter in delivery of excellent material.

Key Tracks: Check out all four new songs on the EP!

Recommended if you like: The Shins, Yeasayer and Local Natives.

View all posts by Evan Metz →