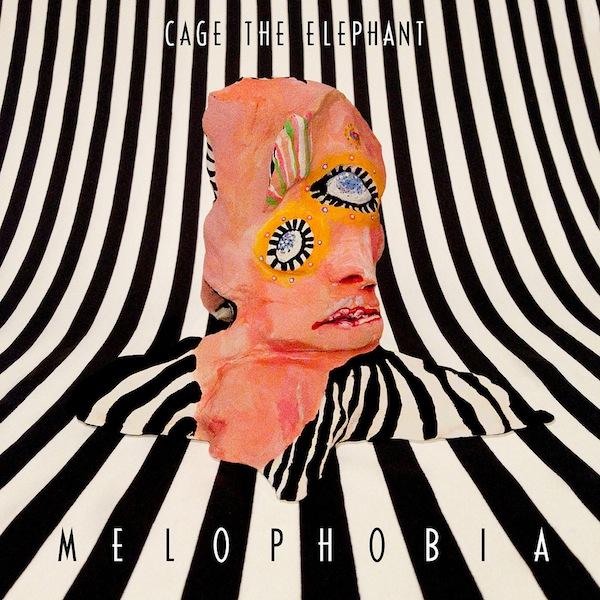 January 1st, 2012 at 2:15am a man slouched up against his tour bus played a nameless song (that would later be known as the 8th track of Melophobia) for myself and 15 other individuals that I wouldn’t hear again for another 21 months. What is now “Hypocrite” didn’t budge one inch between that snowy sidewalk and the live stream in front of me today. It is this overwhelming commitment to integrity that speaks to the million or so Cage The Elephant fans that exist today. The five members of Cage The Elephant are no strangers to musical evolution. Their self-titled LP was born out of raw energy and the playfulness of youth back in 09’. In 2011 their sophomore album, Thank You, Happy Birthday, retained all the same energy, but redirected it to a dark, honest, place that exists somewhere in all of us.

Whether you preferred the delicious racket of the first, or the cabin-in-the-woods writing of the second, the newest addition to the CTE library, Melophobia (drops October 8th), expands upon the bands’ musical vocabulary resulting in a titillating listening experience. Matt Schultz relays almost a conversational lyric writing style through adventurous intonation showing us that he is not afraid to step out of his comfort zone (Given that he often fantasizes about licking the faces of fellow elevator passengers, I don’t think he has one).

Schultz noted in a recent interview that he received some song writing advice from fellow Bowling Green resident, Tiger Merrit, whose musical compositions have been known to cave in floors in his band, Morning Teleportation. Tiger told Matt to write songs in the style of his everyday diction, and that’s exactly what he did. This focus evoked incredibly honest and introspective songs. If anybody respects the notion of honesty, it would be the man with “Don’t fight honesty” tattooed across his right arm, Schultz himself. Everyone is prone to experiencing loss of self, and the broader theme of this album points to finding your center, doing what feels right, and letting go of self-doubt.

A horn section, a piano, falsettos, abrupt tempo changes, and the good ol’ Bowling Green guitars contribute to an orchestral portrayal we have not yet seen from Cage The Elephant. The climax of the lead track, ‘Spiderhead’ includes a looping edit that is normally found in David Guetta songs, yet it seems right at home. Abrupt tempo changes like this occur throughout the album, keeping listeners on their toes. The flow of the album starts off with dynamic tracks like ‘Come a Little Closer’, but then enters an area of mystery, juxtaposing softer songs next to ribcage rattlers. Perhaps the gem of this album is Alison Mosshart’s performance in “It’s Just Forever”. It’s haunting, it’s groovy, it’s bluesy, and it’s . . . Just Forever. This is the first time we have seen cross-pollination on a CTE album and perhaps Schultz or the rest of the band can return the favor on a Kills, or Dead Weather record. The band displays their inner ‘Doors’ spirit on the track ‘Teeth’. Halfway through, the song drops out of its rumbling agitation and into transient entropy with Matt speaking poetry reminiscent of the chaos of Jim Morrison’s “Horse Latitudes” some 40 odd years earlier.

Of course these assertions are derived from my interests, my background, and my perception. This brings me to the hallmark of the album, which is the vaguely familiar lyrics and mystery of introspection that allows many walks of life to find a home in this record. We’ve all walked home in the rain, had to realize a harsh truth about ourselves, experience paranoia, or face a trivial fear. Melophobia makes peace with these symbols of discomfort and leaves us one question. What exactly is the fear of music? As far as I know, I saw it in Schultz’ eyes on that sidewalk 21 months ago.