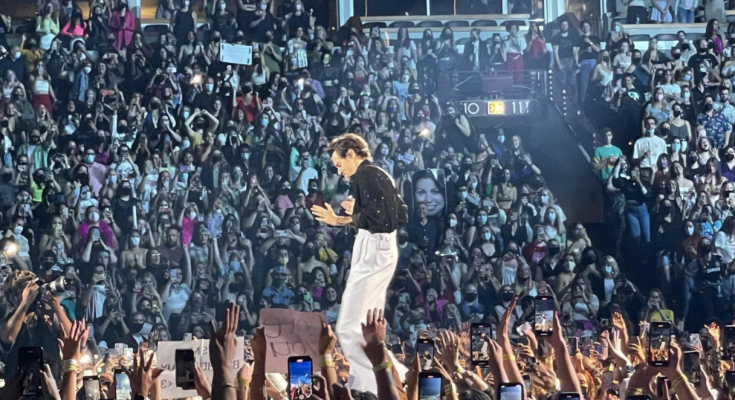 This past weekend, I went home to see Harry Styles perform at the United Center for his second solo tour. We had originally planned to see him in the summer of 2020, but the tour was postponed due to COVID. I had personally been looking forward to this concert because I have been a fan of Styles’ for years. I admire his willingness to experiment with new styles and techniques of music, as well as his stage presence and level of performance. He and his band did not disappoint, as the concert was most definitely one of the highlights of my 2021.

It was very interesting to be back at a stadium concert given the nature of the past eighteen months. The venue required proof of vaccination or a negative COVID test within the last two days, but being around 25,000 people indoors was still somewhat daunting. Before the concert, they played a recorded message from Styles requiring us to keep our masks on for the duration of the show. The majority of people followed this recommendation, which made for a more safe and enjoyable experience.

I was most impressed by Styles’ energy throughout the performance. The staging of the United Center is such that it was a performance in the round. He used all of the space available to sing, dance, play his instruments, and interact with the audience. He also was careful to divide up the time he spent facing each side of the audience, which I thought was clever. Although the concert sped up and slowed down at times, his energy and stage presence never wavered.

He opened with the bouncy yet somewhat celestial “Golden”. This is one of his most well-known and well-loved songs off of Fine Line, his second album after Harry Styles. “Golden”, as well as a few others off of Fine Line display Styles’ deviation from the soft rock feel of his self-titled album. It is somewhat of a return to his roots as a pop singer as he was in One Direction.

In my opinion, the radio hits off of Fine Line such as “Watermelon Sugar”, “Adore You”, and “Lights Up” were the weaker points of the show (although weak is relative because of Styles’ undeniable talent and performance ability). Although there was heavier engagement between Styles and the audiencence during these songs, there were less musical elements from Styles and the band. I feel as though some of these songs do not fully represent Styles’ songwriting ability and vocal talent. So while it was fun to dance and sing along to these songs, there were other pieces that stood out to me as more enjoyable.

Being a fan of both classic and modern rock, the more rock heavy pieces such as “Only Angel” and “Kiwi” were standout performances for me. The first time I heard Harry Styles in 2017 with One Direction as the only frame of reference I had for Harry Styles, I was pleasantly surprised by these tunes. Styles performed with such an intensity during these songs that was very fun to engage with. These tunes also gave the band a bit more opportunity to show off their individual talents, such as Sarah Jones’s impressive drum work and Elin Sandberg’s bass guitar work.

Another one of the standout performances of the night for me was “She”. “She” is one of my favorite songs off of Fine Line because it reminds me of a Harry Styles-esque rock feel while adding some of the experimental pop that characterizes the majority of Fine Line. It also includes some of Styles’ strongest vocal work, as he slips in and out of falsetto throughout the song. The performance of “She” also included a lengthy guitar solo from guitarist Mitch Rowland and pianist Niji Adeleye. This was an incredible opportunity for these artists to showcase their talents and the audience was very engaged with them.

The highlight of my night was the surprise performance of “To Be So Lonely”, a slow, ethereal almost folk-pop song off of Fine Line. “To Be So Lonely” was the first track I had heard off of Fine Line and has remained one of my favorite songs by Styles ever since. The buildup and breakdown of harmonies in the song quite literally gives me chills every time I listen to it and the song is simple but still interesting in its composition and lyrical work. I have somewhat of a bad habit of looking up setlists before I go to concerts, and when I didn’t see “To Be So Lonely” on the setlist, I was somewhat disappointed. However, after “Sunflower vol. 6”, when I heard the first five plucked guitar notes of “To Be So Lonely” I immediately started freaking out. The performance was above and beyond what I had imagined. It was also really special that Chicago was the first city where he played the song.

Overall, Styles’ performance exceeded my expectations. Seeing live music was something that I took for granted before the pandemic, and having the opportunity to see one of my favorite artists live was an incredible opportunity. I appreciate Styles as an artist, as well as everything he stands for as a person. He is not only an activist, but is working to break down gender and sexuality stereotypes in the music industry. If you have never given his music a chance, I highly recommend that you do. There is something there for everyone, as well as the presence of his apparent and undeniable talent.