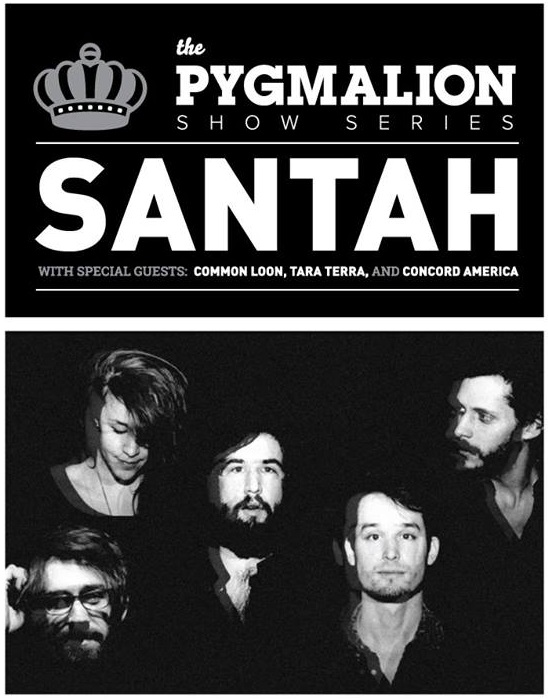 If you keep up with WPGU’s big brother, the Daily Illini, then you would’ve seen an article run this week about how strongly women are represented in the local music scene. The timing of that article came at just the right time, seeing as how it was girl’s night at Cowboy Monkey this Thursday (despite the drink specials not reflecting it). Between Santah’s Vivian McConnell, and the three ladies at the front of Tara Terra (Emily Otnes, Alleya Weibel, and Rachel Wilson), the stage was met with some of the strongest hitters in the CU scene.

I walked in to a wall of distortion, bleeding from the speakers of out-of-towners, Concord America. This Atlanta-based punk trio set the bar pretty damn high in terms of energy for the night. Their overdriven riffs, and aggressive vocals paired nicely with the thrashing the drum set was receiving. At one point, they announced a “slow one”, a term that has to be understood as relative, because it was still pretty fast, and just as loud.

What grabbed me the most was that despite being sloppy, aggressive punk, the band was super tight, and the creativity and technique really shone, especially in a brief arrangement of the theme from “The Pink Panther”. They ended their set after two break-neck paced songs (that didn’t slow down even a little bit) leaving an electricity on stage to be picked up by Tara Terra.

You’d have to be practically be living under a rock to have not heard of Tara Terra by now. They were featured on three(!) end-of-the-year lists by Smile Politely last year, and had a great contribution to Buzz Magazine’s February compilation album, Covering Our Tracks. If you actually do happen to live under a rock, I’ll fill you in on what you’re missing out on. The young five, sometimes sixsome took the stage unassumingly. Their wardrobe alone would be enough to recognize how different their sound would be to Concord America’s. But their innocent faces and clean button-ups shouldn’t fool you, these guys know how to put a show on.

Their remarkable guitar tones laid a great surface for Emily Otens’ powerful vocals, while Alleya Weibel’s violin provided a nice soft underlay for some of the more tender moments (although, when it got loud, the violin got very hot and trebley, leading to a few too many outbursts of feedback). When they invited Rachel Wilson to join them, three-part harmonies rung out over Colin Althaus’ impeccable guitar solos. With a perfect blend of strong musicianship, great compositions, and tasteful Santana feat. Rob Thomas quotes, their set (to a packed house) removed whatever doubt there was that Tara Terra’s name is only going to get bigger.

This pysch-rock duo of bearded, beanie-adorned dudes hit the fog shrouded stage next. With their reverb saturated vocals and spacy guitar washes, they took the previous sound of the night, sat it down, and told it to chill out, dude. However, the lazier, more atmospheric sound didn’t detract from the energy. Their Animal Collective-like vocal harmonies and driven guitar floated over a bed of soft synth, while infectious drum grooves sat in the driver seat. Though at times, I missed the low-end that a bass would have provided. Regardless of their somewhat limited range, they provided a welcomed purity and comfort, cleansing the stage for Santah.

CU veterans (and current Chicagoans) Santah closed the night out, with an astounding performance of their unique dreamy rock. At the front of the five piece stood brother and sister, Vivian and Stanton McConnell, whose vocal chemistry harbors absolutely beautiful harmonies. Compared to the power trio of girls at the front of Tara Terra, the sibling pair’s blend of male and female vocals gave the music an additional color untouched by the night’s previous performers. In addition to the vocals, the instrumentalists provided an exceptional accompaniment. Interwoven guitar lines, masterful bass complements, and explorative drumming danced underneath the never-fading beauty of the McConnell’s harmonies. With the mix dialed in perfectly and a crowd completely hypnotized by the group’s songs, the set made for a wonderful cap to the evening that perfectly showcased what an incredibly talented and inclusive music scene we’re lucky to be a part of.