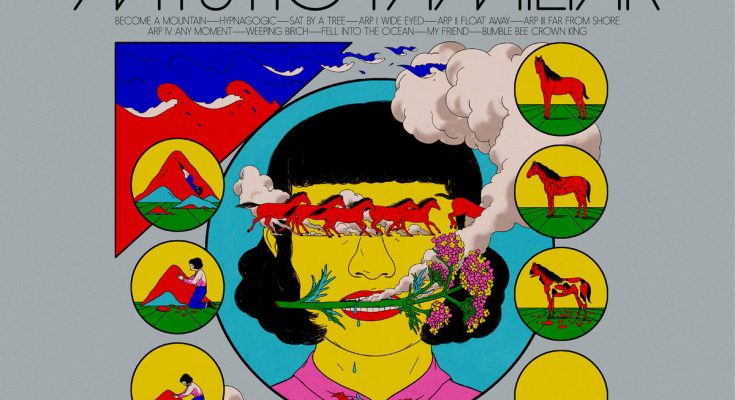 After five long years of waiting, Baltimore composer, producer, and singer/songwriter Dan Deacon has finally released his eighth full-length studio album. Mystic Familiar shows Dan pushing the envelope of his familiar songwriting formula by delving into a more minimalistic and psychedelic sound than previously seen in his work. Over the course of 44 minutes and 11 tracks, the listener is taken through a mystical journey over mountains, through the forest, and into the sea as each section of the album represents a different part of nature.

The album opens by lifting the listener up to the sky on “Become a Mountain,” a track consisting entirely of pianos on the instrumental side, with Dan’s soft voice on top. The vocals on this song are reminiscent of Animal Collective’s Avey Tare or Wayne Coyne of The Flaming Lips, bringing a sense of comfort to the piece. Despite the minimal instrumental composition, the song builds to a beautiful, exploding climax that provides hints of the grand, classically inspired tones found on the rest of the album.

Following that, the next single from this album is “Sat By A Tree,” a fast and upbeat track that makes you feel like you are running through the woods. While the vocals are similar to the ‘forest children’ sound of Animal Collective, the instrumental sounds more like a synthpop spin on the style of psychedelic indie rock band The War on Drugs, more specifically their 2017 single “Holding On,” one of my favorite tracks of that year.

The middle of the album consists of four tracks grouped together by the “Arp” title. The neo-psychedelic sound seen in the two teaser tracks bursts through with full force here, with the first track, “Wide Eyed,” being the strongest of the four. The following track, “Far From Shore,” takes the mystical, droning beat and repeats it to the point of near-tedium, creating one of the weaker points on the record.

The instrumental, psychedelic style of the latter two “Arp” tracks continues on “Weeping Birch,” which transitions into the pounding echoey “Fell Into the Ocean.” This track really does feel like the soundtrack to a descent into the world of the deep sea, with pulsating synths that sound like the sonar on a submarine and a catchy vocal hook to go along with it.

In the end, the record closes on what I believe to be the second weak spot on the LP, “Bumble Bee Crown King.” Although it does create an atmosphere with its buzzing synths and grand, royal composition, its 7.5-minute length drags it into tedium, similar to “Arp II.”

Overall, this album met expectations for me. Dan’s previous albums have all felt like they were missing something, and Dan is taking steps towards finding and refining his sound to remove that void on this new record. Aside from the tiresome repetition found on parts of this LP, it has the foundations of a great psychedelic album, and one of my favorites so far this year. 7/10.