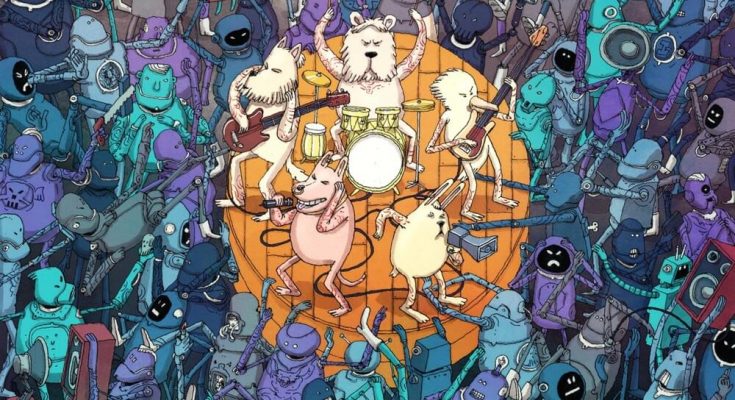 This past year has been a rough time for artists as they try to create, release, and perform music in lieu of social distancing guidelines and coronavirus restrictions. As the year progressed, livestreams and online performances became increasingly popular as musicians still wanted to perform their music live to their fans but could not in person. Dance Gavin Dance, a rock band who’s been performing live for over a decade, released their ninth album Afterburner earlier this year and hopped on the trend of livestreaming their album online. The band seemed to like this, so a few months after, they announced a new livestream with live performances of songs voted on by fans.

Tree City Sessions, released in 2016, was Dance Gavin Dance’s first live album with songs from their entire discography that they chose to perform. Tree City Sessions 2, released on December 25th, 2020, was performed live in a pre-recorded livestream with songs chosen by the fans, with 1 or 2 songs coming from every album in their discography and even one of their singles. With the band’s dynamic lineup over its past decade of performing, and with many fan favorites rarely being performed in recent tours, a lot of songs that could be picked would be great to hear, especially ones from the older albums. The livestream itself was set to take place on the Tower Bridge in Sacramento, California, with the band taking over the bridge for their live concert. All of the details about what would be in the livestream and which songs they would be performing were left up in the air until the livestream, so the hype surrounding the concert was incredible.

The livestream setup was much different than most that we saw this past year. First, as previously talked about, the performance was live from the Tower Bridge in Sacramento late at night, which is a very odd location for a live concert and would be unheard of pre-COVID. Second, the setup was interesting and led to great cinematography, with multiple cameras (including a drone) and fancy lighting illuminating the bridge and the night sky. Lastly, the band opted to have a circular stage with the band members spread out in a circle facing all directions which led to more great camera shots and cool interactions between the band members. With most of the live concert setups simply being a static camera with a small production team and band behind the performer, this live concert was a lot more exciting than the norm of the past year.

Along with the exciting setup, the band itself brought the energy and excitement for their performance of the album. All of the songs included an instrumental intro oftentimes hinting at the upcoming song. The members themselves were very into the music too, like Jon Mess who was dancing like a mad man the entire show. If it wasn’t for Tillian’s fantastic vocals Jon would’ve stolen the show with his awkward dancing. The guitar, bass, and drums were also incredible because of the new and old arrangements of classic songs. These new live songs were a testament to how consistently good the band is and how each of the members brings their own unique sound to the songs.

The actual lineup of songs was a mix of everything I wanted: fan favorites, surprising choices, and solid picks. One of the surprises picks off of Happiness, “NASA”, is one of my personal favorites and for how complicated and energetic the song is, the band delivered and the lead vocalist, Tilian Pearson, made the song his own. Two other surprising picks, “Man of the Year” from Mothership and  “Evaporate” from Artificial Selection, were longer songs that the band went all out on. Some obvious choices like “Summertime Gladness”, “Son of Robot”, and “Strawberry’s Wake” were much like the originals but were still great to hear. “Awkward” and “Inspire the Liars”, two other obvious picks, sounded much different than their originals due to differences in mixing, vocals, and instrumentation, which made them interesting listens and showcases the band’s dynamic lineup and abilities. “Blue Dream” and “Uneasy Hearts Weigh The Most”, two classics, were my favorite of the night, with both live performances potentially being better than their originals. “Blue Dream” in particular is slower-paced, groovier, and more emotional than the original.

Overall, these live performances showcase what makes Dance Gavin Dance so good. Their emotion, complex instrumentation, and diverse sound and history make Tree City Sessions 2 seem more like a greatest hits album than a live album. Even songs that are not considered their ‘greatest songs’ showed out on this live album. But this album is a lot more for the fans because of the history and nostalgia attached to these songs, so it’s something that should be listened to after getting accustomed to their discography and sound.