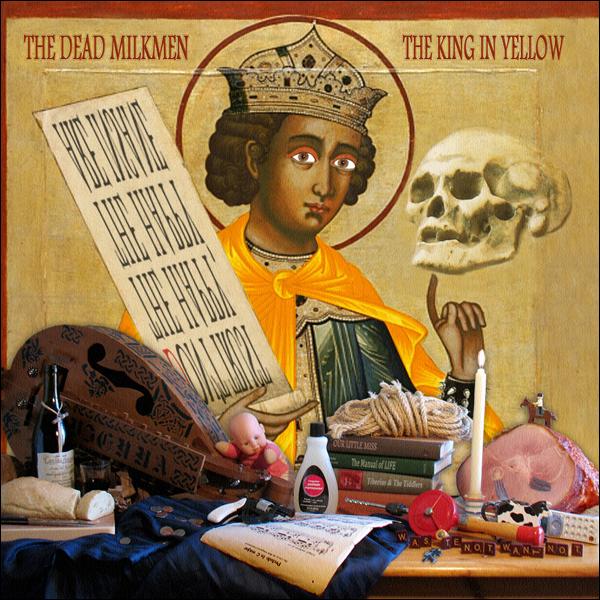 Satirical punk band, the Dead Milkmen, released eight albums from 1985 to 1995, and has now released their ninth album, The King in Yellow—16 years later—where now the target of their satire includes NPR.  This album is interesting and fun, but this album is intended for the people whose peers listen to Norah Jones and who were involved in the punk scene in the eighties, not those who have yet to graduate college.

This record feels like what a new release from Vampire Weekend or Titus Andronicus will sound like in 25 years.  The references to high-brow literature and historical events can come across as either pretentious or genuine, depending on the situation.  On “Solvents (For Home and Industry),” the singer comments on the irony of the life of a friend who dropped out of high school before reading The Great Gatsby, and there the reference reaches through generations in one of the few things constant from the 80’s until today.

The alternative music scene in the late eighties to early nineties was a period of great creativity, and some of the bands that came out of that scene, like Pavement or Nirvana, feel timeless.  The Dead Milkmen feel grounded in time and place, and while this can enhance their appeal to fans, it is hard to recommend this album to anyone who isn’t over 30.

However, the Dead Milkmen have wisdom that comes with age.  In “Commodity Your Dissent” they comment on how “the kids” crazy about “that ‘indie’ feel” easily fall for messages of rebellion that are meaningless.  “There once was a time when rap was dangerous,” they sing, and sixteen years ago it really was, and there are a few things for those under 30 to learn from this album.

This album will not disappoint the Dead Milkmen fan, or the person going through an 80’s punk kick.  The band’s unique feel is enjoyable and the songs here are worth digging into.  However, this album lacks the universal appeal that some other bands and albums have, but for the first album from the band in over 15 years, it is quite a success.

RIYL: Titus Andronicus, the Police, and Ted Leo and the Pharmacist.