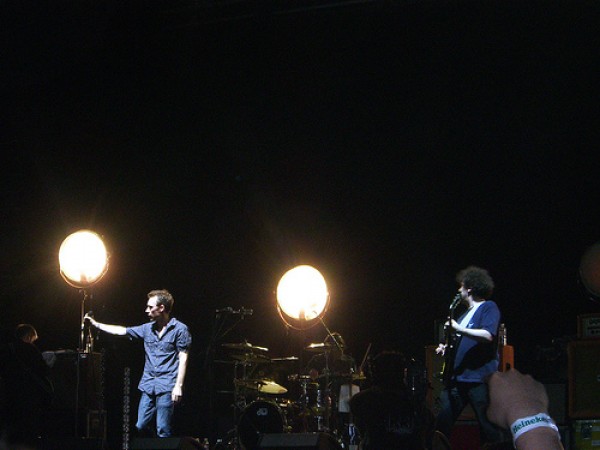 December 29, 2011. That’s today. And 2012 is so close! (Does anyone else feel like they finally stopped writing 2010 on papers and now it’s time for another whole adjustment?)
December 29, 1961. That was the birthday of Jim Reid, lead singer of The Jesus and Mary Chain.

The Jesus and Mary Chain was the fusion of two brothers artistic abilities: Jim and William Reid, who started messing around with ideas and recording some demos in 1977. It wasn’t until 1984, however, that drummer Murray Dalglish and bassist Douglas Hart joined them. The group had a lot of trouble gaining popularity in their native Scotland, but once they moved to London in May of 1984, their demo tape was eagerly snatched up; they started booking gigs and got signed to a record label.
By November of 1985, Bobby Gillespie (a name which Primal Scream fans will recognize) replaced drummer Murray Dalglish, and The Jesus and Mary Chain released their debut album Psychocandy. Unlike many debut albums, Psychocandy went on to be considered an extremely innovative and influential album. It has appeared on Rolling Stone’s 500 Greatest Albums of All Time list, ranking #268.
The Jesus and Mary Chain released five more albums: Darklands, Automatic, Honey’s Dead, Stoned & Dethroned and Munki, with their work spanning from the mid-80s to the late 90s.
After releasing these six albums and going through a smattering of other members, The Jesus and Mary Chain officially split up in October 1999, primarily due to tension between the two brothers. However The band reunited in 2007 and, though some of the other members have changed, Jim and William Reid are still fronting the band together. They were one of the acts for Coachella in 2007 and released a box set of B-sides and widely unheard tracks in 2008.
Happy birthday, Jim Reid! We can’t wait to see what else you bring to the music scene.