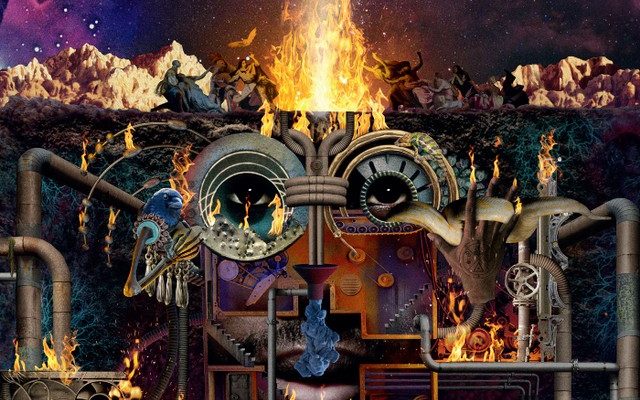 “Flamagra” is the sixth studio album by eccentric hip hop/jazz producer Flying Lotus. It’s the follow-up to 2014’s “You’re Dead!” and is the end of a five-year hiatus that saw very little new Flying Lotus music being released. The Brainfeeder founder is one of my favorite artists ever with his 2010 album “Cosmogramma” being one of the most exciting and inventive albums I’ve ever heard. The cluttered, glitchy yet spacious production was full of texture and was a crazy amalgam of jazzy, sample-based instrumentals.  It was on his early albums the FlyLo forged a sound that would later evolve into much of the output that his label Brainfeeder produces. The psychedelic electronica/jazz/hip hop label has been on the forefront of musical innovation and has provided a platform for artists like Thundercat, Kamasi Washington and Miguel Atwood-Ferguson to explore some more experimental and interesting sounds.

I’ve been waiting a long time for Flying Lotus’ latest album and after listening to it over and over again I have to say I’m a tad disappointed. Every new FlyLo album seems to bring the listener to uncharted musical waters and pushes some sonic boundary, but on “Flamagra” I don’t really think that’s the case. While listening to it all I can think of is how I could pick any recent Brainfeeder release and find the same spacey, slightly off-kilter electronica that is found on almost every inch of “Flamagra.”

The back end of this album is kind of tough to get through as FlyLo just seems to hit you with short filler beat after short filler beat that consists of the same rhythmic drum patterns and ambient string/keyboard melodies with slight variations from track to track. Even the guest vocalists on the back end of this record don’t succeed in making the songs interesting as the mix seems to do the best it can to blend these voices into the ambiance behind them.  At the end of the album, all I can say I really got out of it was some musical motifs that had yet to be fleshed out in any meaningful way.

That’s not to say the album didn’t have some great moments. The song “Takashi” is one of the most exciting songs I’ve heard this year. The track just builds and evolves in such a fun way with layers and textures filtering in and out until your head just starts spinning at light speed. The track “Actually Virtual” with Shabazz Palaces is another highlight that is an actually psychedelic track that tries to be weird instead of just lulling you into a trance. Songs like these remind me of what FlyLo is capable of making which makes the rest of this album that more of a bummer to listen to. I feel like if I had come into to this never listening to a Flying Lotus or anything off of Brainfeeder before I would have been pretty impressed but instead I was just left thinking of what could’ve been.

There are a few themes that seem to run throughout the album. Fire is the most obvious considering how often it’s directly referenced, with some more subtle themes of overcoming pain. My thinking is that FlyLo is viewing fire as a tool with a dual purpose, to either hinder or help you in overcoming obstacles. You could use to hurt yourself and others or you could use it to help warm and sustain you and those around you. It’s a cool idea but I just wish it represented in a more concise and sonically interesting manner.

If you were to cut a lot of the fat from this album I’m sure you would be left with a really solid album but for now, skipping through to my favorites will have to do. The album starts off relatively solid but has it progresses the songs get less interesting and my attention begins to drift off which isn’t something I’ve experienced listening to a FlyLo album before. On a never-ending quest to evolve one’s sound into something completely different you’re bound to hit bedrock and I think that’s what Flying Lotus has done on this most recent release. After creating groundbreaking instrumentals for over a decade he has nowhere left to go.