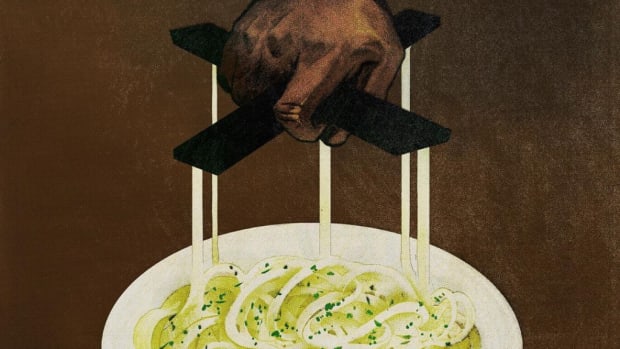 Collaboration albums are a fairly rare occurrence within the genre of hip-hop, but they more than make up for their infrequency through their tendency to be excellent projects. Some of rap’s greatest ever releases — like Madvillainy by MF Doom and Madlib — and most recent impressive releases — like UNLOCKED by Denzel Curry and Kenny Beats — have been collaboration efforts between skilled rappers and equally adept producers. Indiana rapper Freddie Gibbs finds himself as an all-time great in the niche category of collaboration hip-hop records after releasing Piñata (2014) and Bandana (2019) alongside legendary producer Madlib, with both projects often finding themselves in the conversation of the greatest rap albums of the past decade. Gibbs has once again returned to the formula he flourishes under by teaming up with The Alchemist and dropping Alfredo, a top two hip-hop release of the year thus far.

The two waste no time showcasing their greatness on “1985,” as The Alchemist opens the album sampling a Bernie Mac standup routine and a luscious guitar riff while Freddie spits cunning bars about his days slinging cocaine as a young man on the perilous streets of his hometown, Gary, Indiana. On this track Freddie muses about the lasting impact dealing drugs has left on him, most cleverly conveyed through a reference to the ESPN documentary The Last Dance when Freddie says he still travels with a “cocaine circus,” just like the hard-partying 1985 Chicago Bulls that Michael Jordan so infamously described in the docuseries.

Freddie unleashes his coldest flow on the album on the following song, “God is Perfect.” Accompanied by an infectious piano-led beat, Gibbs raps about the uneasiness he harbors as a result of leading a luxurious life thanks to his rap career while so many others are dealing drugs just to get by. On top of delivering his verses at lightning speed, the track sees Gibbs posit some of his most crafty bars — the chorus sees him rhyme “that bladadah” with “Subhan’Allah” in reference to how he still always carries a gun due to his history of criminality while also now seeking refuge from his troubled thoughts through his religion.

On “Scottie Beam” Freddie boldly address the topic of systemic racism and police brutality, starting with the song’s first words, “Yeah, the revolution is genocide // Look, your execution will be televised.” Backed by a low-key piano, Gibbs delivers potent verses on racial profiling while also touching on his struggle to disassociate himself from old habits developed in his past as he searches for the right woman. Feature artist Rick Ross closes out the song with a terrific verse that pays homage to the late Kobe and Gigi Bryant, musing about how their deaths — and perhaps also the racial profiling Freddie touches on earlier in the track — has made him contemplate his own mortality.


Ross’ verse serves as a foreshadowing for the other stellar features to follow on the album, the next of which appears on “Frank Lucas,” the track named after a notorious 1970s New York drug dealer. Atop an eerie beat, Gibbs delivers another cold and well-crafted verse on his former — and seemingly current — involvement in the drug trade. Freddie’s verse sets the stage for an excellent feature from fellow “coke rapper,” Benny the Butcher, who impassively delivers menacing bars on how he’s been hardened through his experiences as a drug dealer.

The subsequent — and arguably best — feature on the project is an unlikely appearance from Tyler, the Creator, who does not seem to have much in common with Gibbs’ upbringing, musical style or typical subject matter, but nonetheless fits into this track like a hand in a glove. Over a slow-burning beat that contains a catchy electric guitar refrain, Freddie delivers his most emotional verse on the album. Gibbs broods about the consequences of leading a life of crime like he has, recalling how it has been a hindrance to him ever since he started earning sufficient funds through his music career; he vulnerably shares his fears of relapsing, getting sucked back into the drug game and squandering his new life. Tyler follows up Freddie’s introspective bars with one of his best verses since Flower Boy, focusing on his unlikely rise to success from multiple angles — from rambunctious teen to eccentric entrepreneur, a young black kid with a dream turned immensely proud and equally affluent black businessman.

The following three songs are armed with more unique beats from The Alchemist, one fantastic Conway the Machine feature, and Freddie diving deeper into his concerns about the double-life he has led between crime and rap. His verses range from the lasting mental toll of manufacturing and distributing cocaine, loved ones being hurt because of his actions, and praying for divine intervention to help steer his mind and soul in the right direction. “All Glass” serves as the strong closing track to the album, with Gibbs spitting some of his best rhymes that are punctuated with a sample from the sixth episode of the hit AMC show, “Breaking Bad.” Freddie’s audacious verses and the reference to this specific moment in the show — in which teacher-turned-meth-guru Walter White takes a bold, life-endangering risk to establish credibility for himself on the streets — concludes the album with a powerful message: whether Freddie finally divorces himself from the life of crime or decides to further embrace it, he’ll do it boldly and without looking back.

Alfredo marks yet another superb collaboration album under Freddie Gibbs’ belt and provides a layered deep dive into how Freddie deals with his crime-ridden past as someone who has since found colossal wealth as a musician. Filled with clever rhymes, unique beats and a powerful narrative, Alfredo is one of hip-hop’s greatest releases this year and warrants every rap fan’s attention.