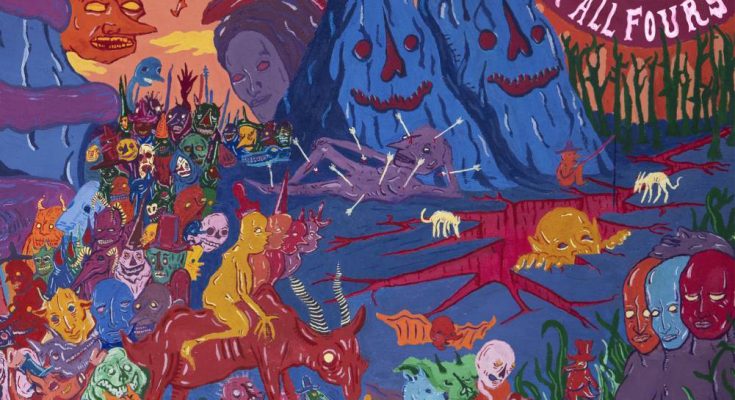 Goat Girl stormed onto the post-punk scene with lyrics about building a bonfire out of the Tories in “Burn the Stake,” thereby taken as a political band. Signing with Rough Trade Records as teenagers, self-titled work of Clottie Cream (guitar and vocals), L.E.D (guitar and vocals), Naima Jelly (bass), and Rosy Bones (drums) featured 19 songs with many not even hitting the two minute mark. It brimmed with clattering, playful ruckus, and lyrics embedded with pain and disguised as apathy. On All Fours finds the band has branched out with an experimental sound, exposing a deeper state of vulnerability.

Each song was beautifully crafted to keep you on your toes. Goat Girl knows how to weave hypnotic vocals and luscious synths with twangy guitars, groovy baselines (of the newest addition Holly Hole), and skilled yet relaxed drumming. There is a sort of breathability to their songs. They cover deep topics in their lyrics that are sometimes so cryptic, it does not sink in until a couple listens. Many of their songs are coated with the unsettling realities that women and non-binary people face in their everyday lives.

“Sad Cowboy” opens with the synths sounding like those used in Stranger Things and transforms into that jaunty Western feel. There is a perfect amount of cowbell. It has the energy of their self-titled but showcases it in a fresher and sophisticated way. The Goats have a great understanding of moving the song along in a lively manner but also take the time to bask in airiness. True to their nature of guitar-centeredness, as demonstrated by their 2018 release, they end up contrasting this with the outro that ventures into house music. The lyrics encapsulate disillusionment and trying to get a grip on reality through your feelings and the world around you.

If you are not impressed with their musicianship, you will be with “Badibaba.” The members of the band switched instruments. They lure you in with a funky rhythm and well-incorporated synth; you cannot help but nod your head and dance a little. Goat Girl criticizes the lack of human responsibility in our climate crisis: “Littered seas, feels like we’re an infection.” The chorus calls out this passivity between the swirling vocals of ba-di-ba-di-ba-bas. You are transported to another world in the haunting and restless outro, spiraling with the whirring noises.

While the Goats let out their frustration about their uneasy interactions with creepy strangers on their first album, they expand on this with a more detailed encounter on “P.T.S.Tea.” Drummer Rosy Bones who is non-binary recounts their experience on a ferry when a guy poured hot tea on them, causing burns that took weeks to recover from: “Dumb man wouldn’t even look back at me, me.” The lyrics lead into other experiences with men being invasive about Bones’ gender identity and sexuality. The band has an innate ability to take traumatic memories and social concerns and form cheerful, sweet, and melodic songs.

Within each song exists that breathiness, but if you really need a breather from the vivacious energy, listen to “Anxiety Feels.” The song addresses mental health struggles with a flowy and lighthearted atmosphere, making you feel relaxed with serene, comforting vocals and lush rhythm. The lyrics capture what you are feeling, lifting the weight of your shoulders and making you feel less alone.

This is certainly an album you need to experience; it may be one of the best you will listen to all year. On All Fours demonstrates Goat Girl’s growth, building on their colorful foundations of their self-titled album. It is confident, assured, and impressive.