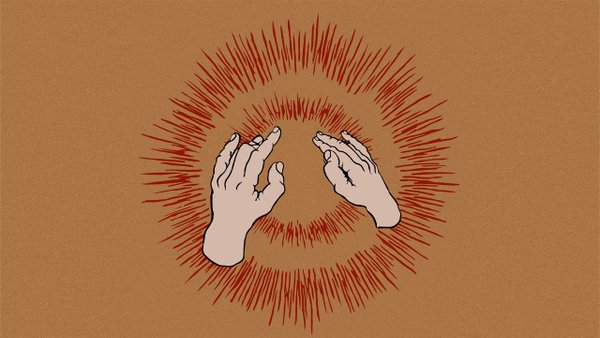 In 1977, NASA included two gold phonograph records on the Voyager spacecraft in the hopes of concisely communicating to any potential extraterrestrial life the human experience. On the record, several songs were included, songs that capture the facet of humanity that cannot be explained symbolically or logically, only through raw subjectiveness. Of course, the spacecraft has already been launched and has been drifting through space for decades now, but if this same situation was recreated today, would any modern album be worthy of “Johnny B. Goode’s” place in summarizing the human condition? I believe that Godspeed You! Black Emperor exactly had this question in mind when creating Lift Yr. Skinny Fists Like Antennas to Heaven.

Indeed, no other album in recent memory has ever conveyed to me an ethos so spiritually universal and distinctly human, while also keeping its emotional manifestation so concrete to the listener. Each of the four 20 minute songs has a unique aesthetic associated with it: the hopeful orchestral string opening to “Storm,” the drained and wandering melodies in the middle of “Static,” the aggressive and frightening drum beats throughout “Sleep,” and the tragic fade out of “Like Antennas To Heaven…” This is where GY!BE are at their absolute best: creating these emotionally-intensive, short furies of pure melodic bliss that echo within you for days. Even still, the more ambient sections between these musical peaks are mostly meaningful experiences, serving as periods of philosophical reflection and tension-building.

Perhaps the most staggering aspect of this album in that, despite the lack of any lyrics, it always seems to have a profound message to seemingly whisper to the listener, avoidant of direct verbal formation, yet so clearly understandable. From just melody alone, the album seems to metaphorically follow a path through middle to old age, starting from the optimistic youth of “Storm,” through the tense and debilitating “Static” and “Sleep,” to the majestic old age of “Like Antennas To Heaven…,” and even within the sections of each song, further analogies can be found.

However, the price the album pays for these beautiful tension-release-tension cycles is the patience it requires from the listener. Parts of the album, particularly some of the longer sections of the ambiance, feel needlessly long or exposited, sometimes to the point of pretentiousness, making for a less enjoyable casual listen. Indeed, while many of GY!BE’s post-rock brethren are wary of ambiance, GY!BE infamously embrace it, perhaps too much. But ultimately it serves as a double-edged sword: the musical lows from it detach the listener from the experience, but the tension it creates gives a greater payoff during the highs. In fact, LYSFLATH is one of the only albums that I have ever listened to where I do feel guilty for skipping around in the album to my favorite parts as the highs are truly much less intense without the tension. Then again, a five-minute section of just random synthesizer notes and guitar plucks is more than just slightly tiring. Another issue is the music, and while its instrumentation is varied and complex, the sound itself is fairly the same throughout the album. This is an issue prevalent throughout the post-rock genre, and although it is a severe hindrance in albums like The Earth is Not a Cold Dead Place, the constantly changing structure of LYSFLATH hides it well enough to not be noticeable during a normal listen. In fact, only on my third listen did I recognize this uniformity of the sound, and even then, it still did not make an appreciable difference to my enjoyment of the album.

However, I would argue GY!BE are cognizant enough musicians to realize these issues with the album, and intentionally constructed the album this way in order to fit in line with the latent theme of life and death. Every criticism can be turned into a symbol towards this motif: the album has long-winded musical lows? Life has long stretches of time with nothing important happening in them. Does the album have a repetitive sound? Yeah, well so does life. And really I can’t help agreeing with these rebuttals, because what GY!BE has created with this album, even in its ostensible flaws, is perfect with respect to its goal: conveying the human experience.