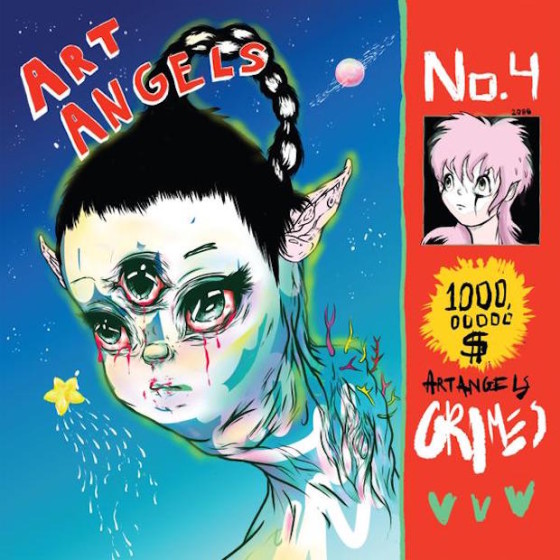 Grimes’ fourth studio album has been the most highly anticipated throughout her career thus far. Art Angels is a strange mirage that takes you through a dreamy wonderland of high pitched vocals and bubbly upbeats. Similar to previous albums, Grimes stays true to her original style of synth pop with the only change on Art Angels being her attitude. Grimes takes us on a ride with really no beginning or ending, just an interesting mix instrumentally and linguistically. Musically, this album lives up to its cover art as odd, colorful, and not from this planet.

The opening track, “laughing and not being normal,” starts off as suddenly striking with running tides of orchestral works. It’s speedy and smooth, moving to transition onto Grime’s high pitched, foggy vocals. The song sounds like it could be out of a Tim Burton movie, mysterious in its nature. “But you can’t go where they all go/when the leaves begin to fall/I try to catch them all” are the only lyrics this almost two minute track consists of, but with a piano, violin, and chimes there really is no need for more. The song progresses into a darker side towards the ending in which tones get deeper, quicker, and lead to a buildup that only ends with a crash. Leaving a dazed impression, the listener is taken off into the dream pop world to discover the meanings behind these words and emotions within sounds.

Following the first track, “California” can be interpreted as almost an ode to her audience. The song itself is happy and upbeat, but the lyrics say otherwise. Grimes addresses the general public by saying, “The things they see in me, I cannot see myself/When you get bored of me, I’ll be back on the shelf,” making hers seem insecure in her own musicality, and confused on who she is. With lyrics like, “You only like me when you think I’m looking sad,” Grimes makes a statement for herself, exposing truths and embracing them, rather than drowning in the melancholy muse people typically expect from her. It’s expressive and bold, and the beat itself is nonetheless catchy and dance worthy. The album gets experimental with tracks such as “SCREAM” which features Aristophanes, a Taiwanese female rapper who is the only source of vocals on the song that is in Mandarin. This track is raunchy and daring in a sense, standing out as the edge in the dream pop land.

With an overall dreamy, ’90s feel, Art Angels is assertive and a kaleidoscopic vision, instrumentally. From twangy guitars and bubbly beats to low toned strings, this album even includes a catchy, hip hop dance-worthy bass in songs like Venus Fly. Its oddness and diverse use of electronic effects brings sound into your bloodstream to confuse yet enlighten you in strange ways. I would recommend this album if you’re up for a daydream.