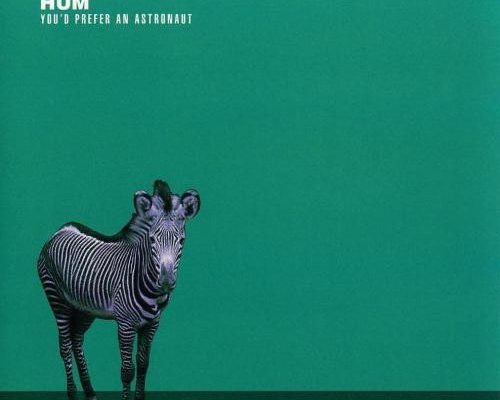 The average person may dismiss Hum as “car commercial music” or perhaps recognize their name from when they were featured on Beavis and Butt-head, but the band is much more than either of those things. The Champaign natives released their monumental third studio album You’d Prefer an Astronaut in April of 1995. The 90s were a golden era for alternative rock and guitar-based music, and Hum’s album is one of the most overlooked albums of that period. 90s alternative rock can be broken down into several subgenres such as shoegaze, post-hardcore, grunge, and so on. You’d Prefer an Astronaut stands out since it does not limit itself to one of those genres–it’s a gorgeous medley of all of them. If you enjoy even one of those genres, then this record has something for you to appreciate.

Hum formed in 1989 with the original lineup consisting of guitarist Andy Switzky, guitarist Matt Talbott, bass guitarist Akis Boyatzis, and drummer Jeff Kropp. Switzky and Tabbott met at Treno’s, a cafe in Urbana where Switzky worked. By the time the band released Astronaut, the band’s lineup had changed. Now, Tabbott was on vocals, Jeff Dimpsey played bass guitar, Tim Lash was a secondary guitarist, and Bryan St. Pere was the band’s drummer. The album is full of nine densely-packed exciting songs, all with rolling, melodic basslines, loud guitars, and lots of reverb. Tabbott’s vocals are a bit of an acquired taste, but fans of lo-fi bands such as Pavement and Guided By Voices should enjoy his talk-singing vocal style. Throughout the album, he switches from crushing screams to quiet whispers based on the subject matter in that specific song, indicating that there was a lot of thought put into the vocals. The vocals service the sense of forlornness and resignation that runs through the entire album, and this contrasts nicely with the heavy, loud rock sound of the music.

In terms of songwriting, one often wishes that the tracks had more varied lyrics to ease their repetitiveness. There is a lot more left to be desired in terms of lyrical content, but the powerful drums and thick, wall-of-sound guitar tones pretty much make up for it. Tabbott sings about science fiction, stars, and astrophysics. There is a romantic quality to his lyrics as well. On “I Hate It Too,” Tabbott sings about a doomed relationship in which the speaker feels a disconnect with his partner, and this disconnect grows worse over time. He feels as if she is not giving enough in the relationship when she used to “sweetly hold [his] face” and ultimately they both hate their relationship for different reasons. The most well-known song off Astronaut is “Stars,” a five minute epic with an extended chord and a dramatic pause towards the beginning of the song. Once again, Tabbott is singing about not being on the same page as his partner and feeling as if he “finally broke her.” Astronaut finishes with “Songs of Farewell and Departure,” a pleasant conclusion and my personal favorite from the album.

While Hum may not be hugely remembered or considered one of the great rock bands of the 90s, their impact on the local music scene is worth noting. The band recorded the singles “Hello Kitty” and “Sundress” with Champaign-based label Mud Records. Their music is also credited with bringing alternative music to Champaign record stores, and their success helped other local acts gain national attention. Additionally, their music has influenced other great bands such as Deftones, with Chino Moreno calling Astronaut one of his favorite records of all time. Any alt-rock fan will find something to enjoy on You’d Prefer An Astronaut–it is an absolute gem worth checking out, and it’s incredibly exciting to see such a big project originating from Champaign.