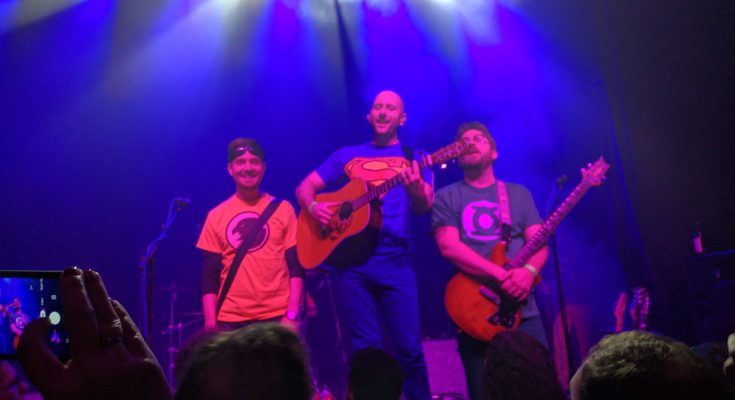 “Make new friends and keep the old, because one is silver and the other is gold.”

The was the sentiment shared on stage at I Fight Dragon’s 10th sold-out anniversary concert December 21st at Lincoln Hall in Chicago.  They’ve experimented with making music different ways; brought new fans into the fold; and had experiences, both positive and negative, that they’ve grown from over the years.  Despite the changes, challenges, and the passing of the years, they still keep their first fans and first album close by. Their first EP, Cool is Just a Number, was unveiled to the world ten years ago.  Their show was a retrospective of the foundation that album created for them and a celebration of the release of their newest album, Canon Eyes.

The show opened with Secret Bad Boy, a group of five guys with beards with a very eclectic sound with intersections of Indie and garage rock, synthpop, and electronic-tuned vocals.  Violet Crime followed them playing songs from their newest EP, Paper Queen. Their set was rhythmically driven with high-flying vocals and jazzy roots coming together to perfectly match their rock overtones.  Both these groups were incredibly fun to listen to and, in the case of Violet Crime, sing along with when they played covers of some classics; “Valerie” and “Come and Get Your Love.” Their performances set the stage perfectly for IFD to rock out.

They opened with a part of their new album, repeating a mantra that they aren’t done yet before jumping back in time to Cool is Just a Number.  They played the EP in its entirety, sprinkling in songs from every album and EP they’ve released since then. The members; Brian Mazzaferri, Hari Rao, Packy Lundholm, Chad Van Dahm, and Bill Propkopow; all took turns in the spotlight shredding solos on top of boxes lighting them from below, cracking jokes with each other, and reflecting on the music of the last ten years.  The crowd sang along to nearly every song and showed their passion for the Chicago band in the packed theater. The band’s color-coordinated outfits added a sense of novelty, and novelty turned to nostalgia when they went off stage and came back wearing the same superhero shirts they used to wear at concerts ten years ago. The energy kept rising as the night went on until a gentler atmosphere was adopted when a long-time fan proposed to his girlfriend on stage before the band played “With You,” an acoustic love song.  She said yes, for those wondering.

The energy came back and the band continued to jam out as the night drew to a close.  They finished their set and left the stage as the crowd chanted “IFD!” Moments later they came back out for their encore, playing their song “Chicago” as an homage to the city they love and call home, and as a thank you to the fans that have been with them over the years.

What’s in store for them for the next ten years?  Well, they hope to play their music on Mars. They bet the aliens will love it.

Be sure to listen to our full interview with the band.

View all posts by Connor Ciecko →