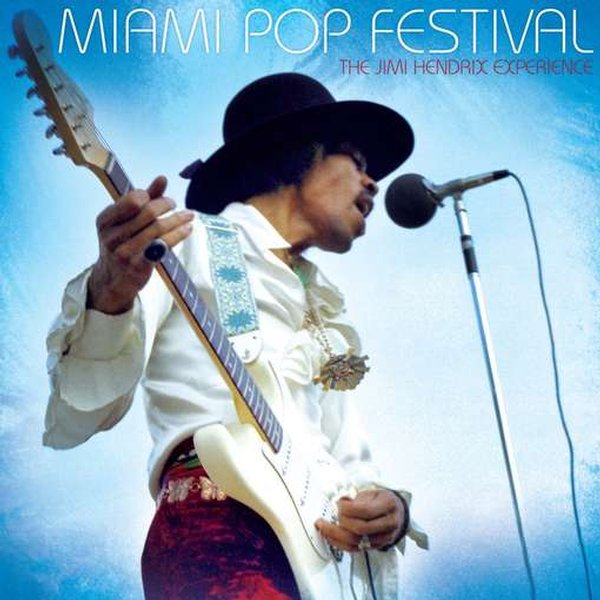 Recorded live at the Miami Pop Festival on May 18, 1968, I thought this release would be just another set of recordings that would fall through the cracks like many of the posthumous Hendrix releases have. It’s too early to say how it will be received, but I think this one has a few special offerings.

For a recording that was made in 1968, the sound quality is great. Whoever worked on the remastering did a fantastic job. My favorite thing about this release is how well you can hear each instrument. This might be the clearest live recording that I’ve ever heard of the original Experience, who was in the process of recording Electric Ladyland when they did this show. Through headphones, it’s presented as they were set up on stage: Jimi on the left, Mitch Mitchell (drums) in the middle, and Noel Redding (bass, louder than ever) on the right.

Certainly, the band is in fine form on these recordings. They seem to have calmed down a little since their breakout performance at the Monterey Pop Festival in the summer of 1967, in which they did everything they could to put on the type of show that no one had ever seen before. On Miami Pop Festival they have found their niche and it’s all about the music. Mitch Mitchell’s drum sound is top notch, allowing you to hear every little thing he did (particularly the bass drum). Noel Redding’s muscular bass sound holds it all together as usual. Hendrix plays as insanely creative as ever, and his unmistakably rhythmic vocal style really cuts through the mix nicely.

The set starts off with “Hey Joe” and “Foxy Lady,” which don’t have anything in them that we haven’t heard before; these versions might be a bit rushed, too. Maybe they intended those songs to be their warm ups. After all, they didn’t even tune up until they got on stage, as heard before they launch into “Hey Joe.”

The rendition of “Hear My Train a Comin’” is pretty interesting. It seems like this is the point in the set where Hendrix’s playing started to really loosen up and get creative. This is evident on “I Don’t Live Today,” which features some of Hendrix’s most inspired guitar work on the album, taming the feedback he gets from his amplifier like no one else could. This record also contains one of the more enjoyable and inspired renditions of “Red House” that I’ve heard, maybe because I can hear everything so clearly.
Miami Pop Festival doesn’t present the most exciting Jimi Hendrix Experience set I’ve ever heard, but what they do, they do well. It’s great to hear such a clear recording from a period in the band and Hendrix’s live performance history that doesn’t get talked about as much. It’s strange to say that because he made all that music we still hear and talk about today in a span of only four years. Amazing…

You can stream the entirety of Miami Pop Festival below: