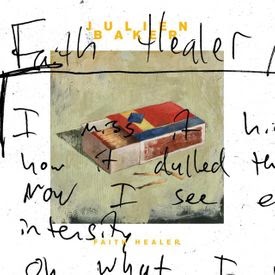 Ahead of the announcement of a third album release coming on February 26th of next year, Julien Baker returns with a new single, “Faith Healer.” This is the lead single for Little Oblivions, her next solo project following 2017’s Turn Out the Lights. This was not the end of her released work in that time; she collaborated with Lucy Dacus and Phoebe Bridgers for the supergroup Boygenius on their self-titled EP from 2018 and the trio provided backing on Hayley Williams’ “Roses/Lotus/Violet/Iris” this year.

Her previous albums put her in a strong place as one of the current faces of indie rock, cemented further by other current stars right now that she collaborated with on Boygenius. Fans of hers have been able to watch her grow musically as her output develops. Her first album, Sprained Ankle, marked lyrical content made up of struggling with crises, whether that be relationships, addiction, or religion. The sound of the album was minimalist and folky, the sound of Baker’s voice and a guitar making up most of the production. The success of the album, finding its way from small Bandcamp release to touring and label signing, spurred Baker on in making her sophomore album Turn Out the Lights. While extending the instruments that appeared, with Baker now playing piano and small touches of woodwinds and strings in a few spots, she continued to reach for the stripped back quality of her sound while developing her songs to be greater, wrestling with deeper and more probing examination of all the mess and turmoil that is around her life.

Baker’s music always is that struggle to find a way out of some struggle and continue on with the lessons learned, and it looks like from “Faith Healer” that Little Oblivions will be no different. The lyrics allude to drug use, trading in the way someone can see the world and be hurt by it and give in to something that can provide a break from all that information. It is a pointed encapsulation of a lot of Baker’s motifs with the subject matter and its parallel to religious faith healers. While the specifics of the song lie in her life, the general sense of wanting to rely on something to provide us release from, as the song puts it, “the terror and the beauty,” bring to mind one’s own struggles and escapes. When everything is all too much for us to hold, don’t we want to turn to someone to tell us how to act, something to give us a break in how to think?

Baker returns to speak about how tumultuous life can be, and grapples with the everyday struggles, big and small. The sound here has developed too. Drums make their way on to the track, and altogether the music finds itself bigger than it has ever been before. For Baker, her sound has never been missing anything, nor does it feel like she is making the same circles in her lyrics. Now with her third album, her sound has grown with her and each return has shown that she comes to the same problems greater than she has before, that with time she comes to the whole mess with more wisdom than the last time.