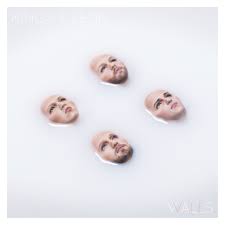 Our beloved southern rockers, Kings of Leon, have certainly come along since the release of their debut album. In their seventh album release, WALLS, the band managed to quite literally break down the walls of the past by emerging into a very different direction than expected. For months they have done a great job creating a massive hype towards the release of this album by playing in major festivals like Lollapalooza. However, this growing success has perhaps constructed this certain overly commercialized and processed sound in their latest release. The hype was promising, however, the overall final product is a bit disappointing at times. Some moments of ingenuity to be found in the album are often overpowered by the a few of the generic refrains that drag on for longer than they should. To say the least, it a solid effort that comes a bit short in comparison to any of other of their previous works.

At first glance, the album cover is intriguing enough to draw the attention of really just about anyone. Upon my initial impression, I examined it careful and after a while it became just a bit too daunting to stare at for such a long period of time. Similarly, enough, listening to some portions of this album can be just as discouraging. As a fan and fellow advocate of bringing back the 80s, even to me, the style of it all in this seems a bit overused. It’s definitely far from what to expected from the same band that brought us “Sex On Fire”, which is easily one of the most iconic alternative rock songs of this past decade.

The opening track “Waste a Moment” is promising with its slow build up that takes me back to the same energy of “Supersoaker”, but it’s still its own success. Some of the prime moments of WALLS can be found in tracks like “Find Me” and “Around the World” which both are excitingly memorable. No matter how addictive some of the melodies maybe, it gets to a certain point where the parts of the albums seems a bit repetitive. Songs off the album like “General” and “Over” are the break up songs that might be seen off any other pop album. In the later portion of the album, it winds down a bit. Lyrically, it is then where Caleb Followill shines the most. At the first listen to the title track, it all begins to feel familiar again with its subtlety and maturity.
As Kings of Leon continues on for the next year to promote WALLS, we will see what is to come after this album. In moments when they choose to reel it back, they are able to deliver music that is worthwhile. However, the effort to branch into a sound that is more radio-friendly detracts them from the distinctness that has gotten them this far. All in all, Followill and company put forth another solid piece of work that may not be as good as its predecessors but it will grow on us eventually.