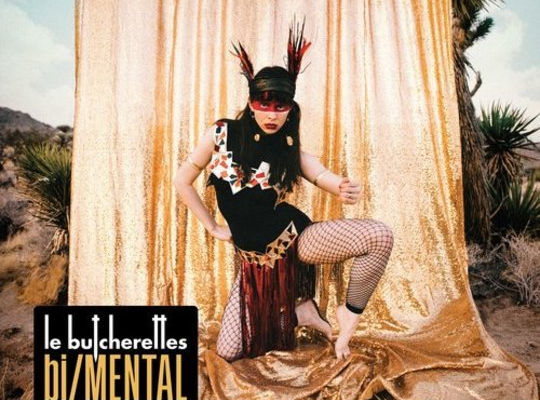 Combining the rawness of garage punk with the technical intricacies of art-punk is not a task for the faint of heart. Hours of experimentation, recording rerecording, and technical finagling all while maintaining the ferocity of punk is arduous to say the least. To craft an album as such would require not only a great wealth of knowledge but also a monumental amount of passion. Luckily, these two qualities are in ample supply to Le Butcherettes, allowing them to craft their latest album, bi/MENTAL.

bi/MENTAL is the 4th album to come out of the explosive Mexican punk band, Le Butcherettes. With a
lineup of guest artists that feels like a “who’s who” of classic punk and current alt, this album is just shy of being the project of a supergroup. This album features the likes of the Dead Kennedy’s Jello Biafra,
Alice Bag of the Bags, Chilean alt superstar Mon Laferte, and produced by the legendary Jerry Harrison, most known for his work as the keyboardist for the Talking Heads. The star power alone is enough to make any browser stop dead in their tracks with intrigue. Le Butcherettes themselves have proved to be a musical tour de force in not only the release of their 3 previous albums but also in their notoriously fierce and intimate live shows. With such a pedigree, this album has punk written into its DNA. How it expresses it is much more.

“spider/WAVES” crashes onto the album as its first track. In what can only be described as a “kamikaze,” the opening guitar rift/chorus feels impending and in your face. This is in no small part due to the guitar tone’s starkly electric distortion and compression. The vocals are sporadic and staccato, giving it less of a feeling of a song and more so like a war chant. Accompanying the style of the vocals are the incredibly punchy and steady drums, furthering the ritualistic atmosphere of the song. In what can only be described as the ravings of a madman, Jello Biafra ends the song with a minute-long monologue, all while the instrumental marches on in the background.

The somber “in/THE END” brings a change-up from the intense rock tones of the rest of the album. The song opens into an acoustic guitar track, with production that can be best described as having the
qualities of a grainy black and white photograph. A cool, smooth drumbeat overlaid by shimmering
synth-tones, emerges as the old weathered production rots away. The chorus provides an exceptionally melancholic atmosphere loudly proclaiming faithlessness, the need for violence, self-impediment, and codependence. As the song draws closer and closer to its end, it grows increasingly cacophonous and oppressive until ultimately, it all fades away.

“la/SANDIA” is the only track on the album that features a guest artist exclusively on vocals. On this track, Mon Laferte takes center stage of this lyrically unsettling yet instrumentally calming track. With the verses operating around the subjects of kidnapping, abuse, and trauma, the chorus emerges as an anthem for the powers of strength and finding one’s own independence again. Accenting the lyrics during the chorus is a cutting synth presenting the main motif of the song, something that is sure to get stuck in your head for days to come.

From its instrumentals, to its lyrics, to its production, this album oozes creativity. Built upon the pillars of art-punk and garage, it is perched high and proud for all to see. Even though there may be some
alienating writing choices and bizarre production quirks, these qualities just further cement it as a
wholly unique experience. There’s something to be enjoyed in this album by any fan of punk in the form of the incredibly thunderous drums, the buzzing synths, the unhinged vocals, the bouncing bass, and the unique approach to guest performances. Le Butcherettes have again shown themselves to be one of the most captivating contemporary punk acts out there.