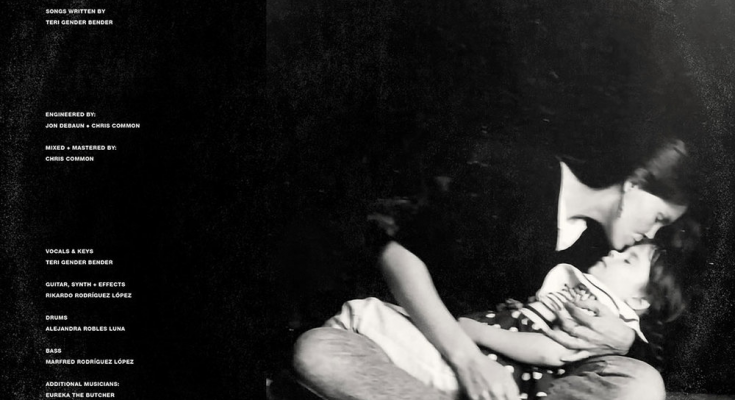 Latinx genre-bending punk band, Le Butcherettes, strikes again with their avant-garde tour-de-force, DON’T BLEED. Arriving roughly a year after their previous project, Bi/Mental, Le Butcherettes perpetuate their refusal to conform to a single genre’s influence. Forgoing the bombastic art-punk centric sound of their previous work, DON’T BLEED instead opts to go down the path of blues-punk.  To no one’s surprise, this path is somber, manic, and haunting, yet, it also proves to be uniquely comforting and approachable. Every song on this album is filled to the brim with distinct, almost tangle, aesthetics allowing each song to take a drastically different direction while still feeling tethered together by their eccentricities and sound palette.

The percussion on this album, both synthetic and not, proves to be the most critical and anchoring aspect on this work. Dark grooves and ambient beats adorn this record almost consistently, making an intertwining membrane throughout the tracks no matter how radically different their soundscapes are. Praise can’t be levied onto the percussion alone as the bass adds a fundamental aspect to DON’T BLEED, steadily low and rumbling, but not without its own levity, as it adds a great foundation for which the melody can be built upon. This is best exemplified by tracks like “DON’T BLEED, YOU’RE IN THE MIDDLE OF THE FOREST”, where the lulling bass grooves act as an accomplice for the alluring vocals. The duo acts as a siren’s song, beckoning you to go deeper into the forest until you have no hope of returning.

The correspondence between bass and melody reaches ahead on the leading single, “TUNISIA.” Somehow, the track manages to incorporate elements of drone, funk, and electronica into its general blues-punk aesthetic. What may sound like a hodgepodge of incongruent genres actually manifests into a captivating interplay of droning synths, shredding guitars, driving bass, and precise drums, making for an almost ritualistic vibe to this track. The entirety of DON’T BLEED feels as if something sinister is afoot, eventually coming to a head with its ultimate track, “BOOM”. This track is sparsely inhabited, only utilizing staggering synth beats and delicately breathy vocals. Loneliness and nostalgia germinate progressively throughout this track as if you are walking through a decrepit home, filled with derelict mementos of those who once inhabited it.

The nature of DON’T BLEED is off-putting in all the right ways, thoroughly captivating, and fully realized. The experience of this EP is wholly idiosyncratic from the vocals down to the percussion. Teri Gender Bender has always had a penchant for making her work on Le Butcherettes extremely personal and completely distinctive from each previous project. On every project, she explores a new facet of her psyche, viciously vivisecting herself in bizarre and entrancing ways, leaving the extracted remains on the operating table for our listening pleasure. What you find on this project is the pure, captive thoughts of an artist. While it may be uncanny and morbid, it sure as hell makes for an indelible listen.