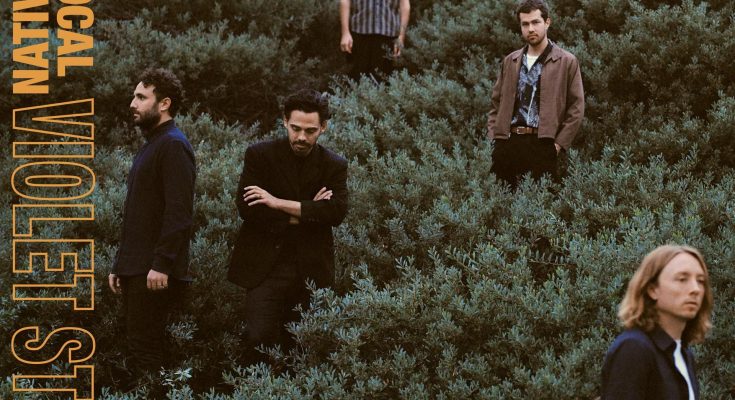 On Local Natives’ fourth LP, “Violet Street,” the band makes a pleasantly surprising
return back to the sound of their debut album “Gorilla Manor.” Local Natives, best known for their glorious harmonies that only fate itself could have crafted, seemed to be heading in a different direction after their last release, “Sunlit Youth,” in 2016. Relying less heavily on their harmonies and more on synth-heavy, repetitive choruses, fans were not sure what to expect going into LP4. What we end up with is entirely unexpected, but perhaps in the best way. It is not quite a return to Local Natives’ roots but a recreation of them. “Violet Street” soars above and beyond any previous releases, both shocking fans and reminding them of the band they first fell in love with.

Each track is bursting with sun-drenched harmonies, not to mention the way that each song perfectly blends into the next. The songs can stand on their own, but “Violet Street” truly reaches its full potential when listened to in its entirety. There is a level of maturity on this LP
that we’ve seen glimpses of before, but never like this. With the music expertly mixed and the
lyrics delicately written, it becomes clear that after being together for nearly 15 years, Local
Natives recognizes their strengths and utilizes them to create a nearly perfect album.

Of all the songs on the albums, one of the most stunning standouts is “When Am I
Gonna Lose You,” which was originally released as a single leading up to the release of “Violet
Street.” It addresses the harsh reality of being in a relationship that’s so good that you just know it’s going to get ruined. It immediately starts with the band’s stunning melodies, delves into an earth-shattering falsetto in the chorus, and includes a remarkably emotionally-drenched bridge.
The song exemplifies that Local Natives can do it all—they’re exceptionally talented vocalists,
lyricists, and musicians.

This leads me to my favorite song on the album, “Garden of Elysian.” The lyrics on this
track are stunning—it realistically describes a high school relationship, all the way down to
“sharing headphones and a plastic bottle of vodka.” It’s naive, it’s simple, it radiates the feeling of first love. There is such a strong sense of nostalgia here, one that we can all relate to on some level. Isn’t everything rosier when we look back at it, anyway?

The last song I want to talk about is “Gulf Shores.” This song is one of the most experimental that the band has attempted, and it’s perfect. It starts off a bit slow but is absolutely explosive by the chorus. The combination of “Garden of Elysian” and “Gulf Shores” creates what is definitely my favorite portion of the album. The two songs work so well in conjunction with one another—we get the soothing lull of “Garden of Elysian” transitioning into the larger-than-life instrumentals on “Gulf Shores.”

While there may have been some doubts leading up to “Violet Street,” those doubts certainly subsided after the first few minutes of listening to the album. Returning to their famous harmonies, their fearless experimentation, and their extraordinarily beautiful lyrics, the band forges a new era by pulling from the old. It is not the album that Local Natives fans expected, but it is the one they needed.