Despite a two and a half hour rain delay, Lollapalooza still prospered on day two. Somehow, Perry Ferrell must have convinced Rahm Emmanuel to lengthen the “quiet hours” imposed by the city, and the festival got a rare 45-minute extension. Though some sets (Temper Trap, included) were canceled during the storm, performers still gave it their all in the remaining shows, and not too many people’s spirits were dampened. 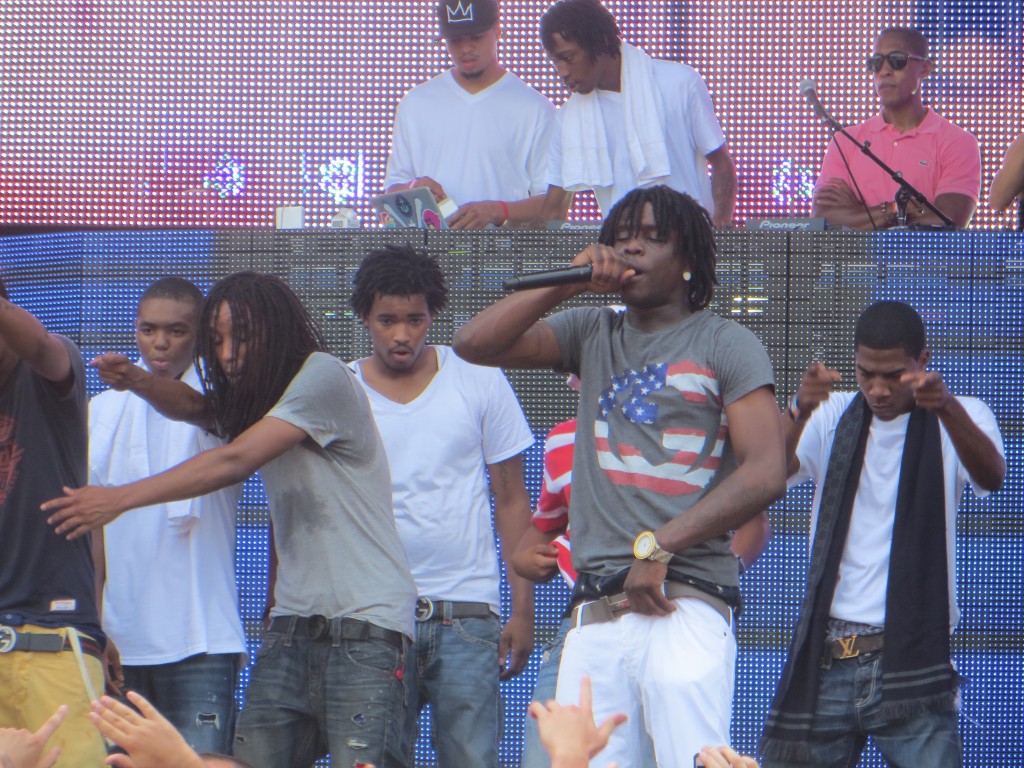 Ok, so I know that being a fan of Chief Keef is a novelty sort of thing, but I just had to wake up early to venture into the city to see this so-called new rap sensation. Keef’s set certainly didn’t disappoint me, but I didn’t really expect to be impressed by the 16-year-old. He brought his entire GBE (Glory Boyz Entertainment) posse on stage with him, and they all shared about 5 wireless microphones. The show was less rapping and more shouting along to pre-recorded music. Keef used his mic to say his signature “bang bang” catch phrase every half-a-minute, and everyone else just jumped around the stage with no real purpose but hype. Let us be clear: I am not ripping Keef. He has been noticed by Kanye West. Obviously he is doing something right. His shows, however, could use some work. After his hit “I Don’t Like”, which played last, most of the audience started to walk away. As they did, the GBE members on stage tried to get the audience to chant “One More Song”. No one in the audience would, and it created a really awkward ending to an already kind of awkward show. Give Keef some time to perfect his live shows, and he could be very exciting. Also, he threw money into the crowd. 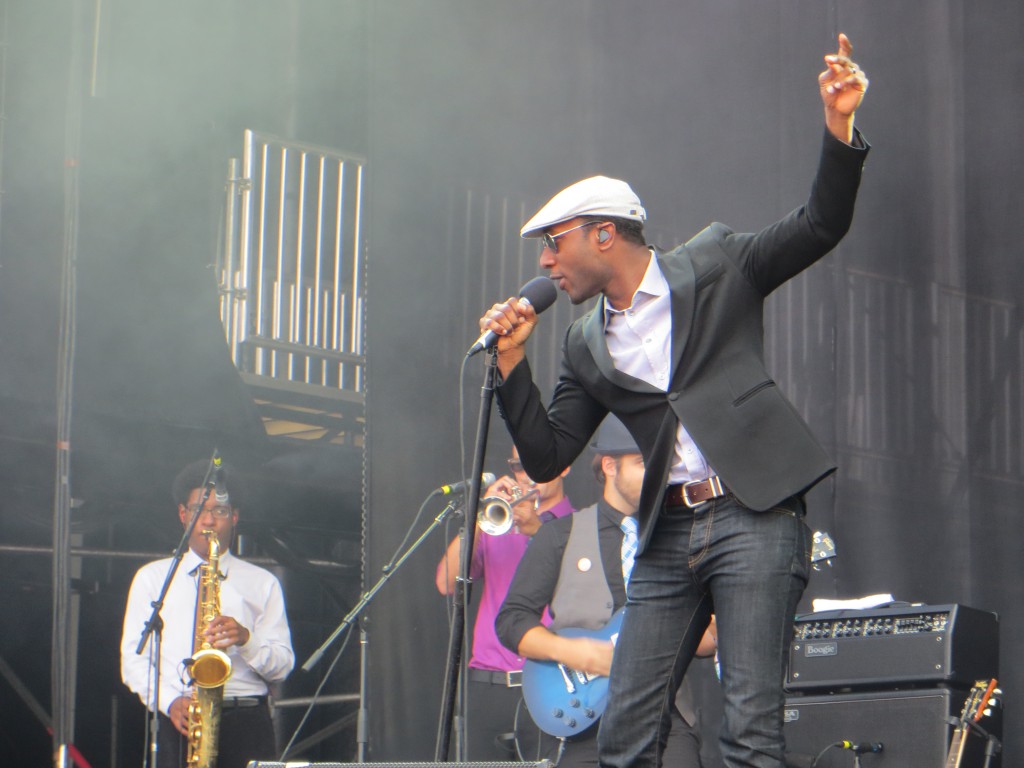 This set was easily the most surprising of the day. If you are familiar with HBO’s series How to Make it in America, then you probably know his song “I Need a Dollar” as the theme. The California-based Mr. Blacc had the entire southern stage rocking with his old school funk and soul. He sounded like something straight out of the Mo-town movement.  Even in the sweltering heat, he came out rocking jeans and a sport-coat, and actually kept it on for the first five songs. It was exactly this type of class and showmanship that made his set so appealing. At one point, he even had the audience chanting “Love” and “Peace” and forming dance lines. Most of his set consisted of cuts from his album Good Things, which was released in 2010. Needless to say, “I Need A Dollar” was both the last and most popular song of the set, sending the entire crowd into a frenzy right before the storm came. 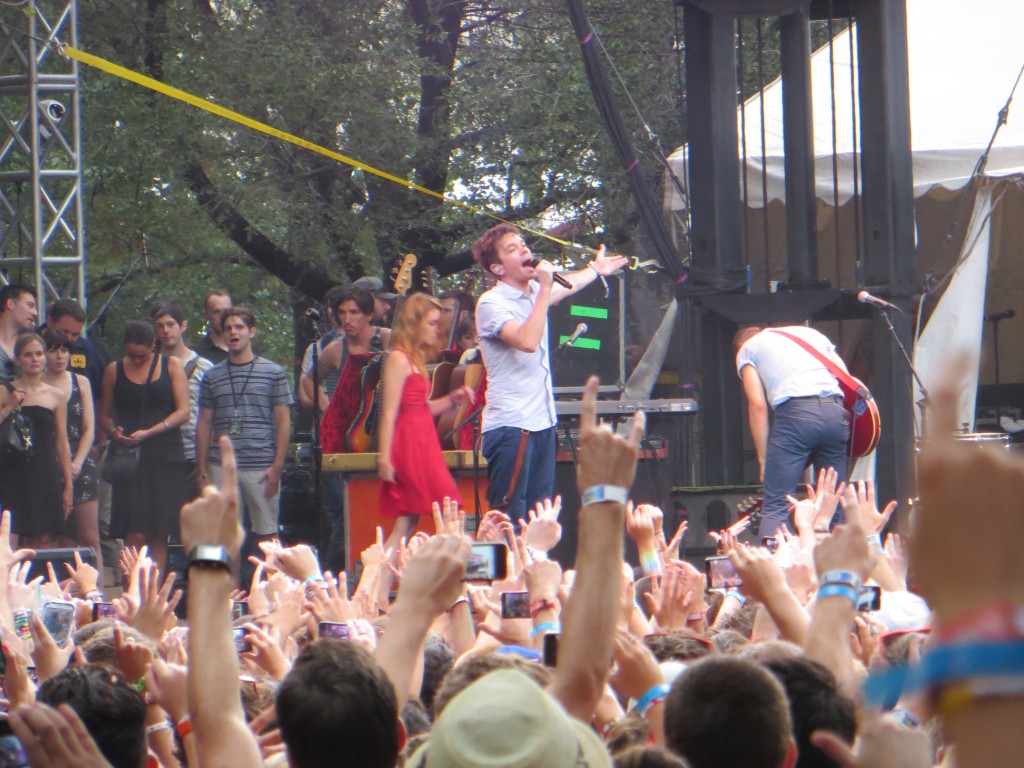 I’ll be honest. I’m not a big Fun. guy. I know they have some members that used to be in The Format, and I know they have a hit in “We Are Young” which has been blowing up the airwaves this year. I just never took the time to check them out.  The New York-based band took the stage immediately after the rain-evacuation to an absolutely packed crowd. I got there 10 minutes early and the only spot available was in the back near the trees. It took them a little while to warm up to the crowd, but when they did, damn did they do well. Frontman Nate Ruess was spewing energy all the way down to his shoes (which were neon yellow, by the way). But really, the show can be summed up by the final two songs. Everyone in the crowd knew every word to “We Are Young” and “Some Nights”, and their excitement was contagious…even to someone who didn’t really know anything about the band. Ruess seemed legitimately surprised that everyone knew the words, and was sincerely delighted when he could put the mic down and let the crowd sing for him. It was this kind of legitimate happiness that truly did make fun’s show fun. 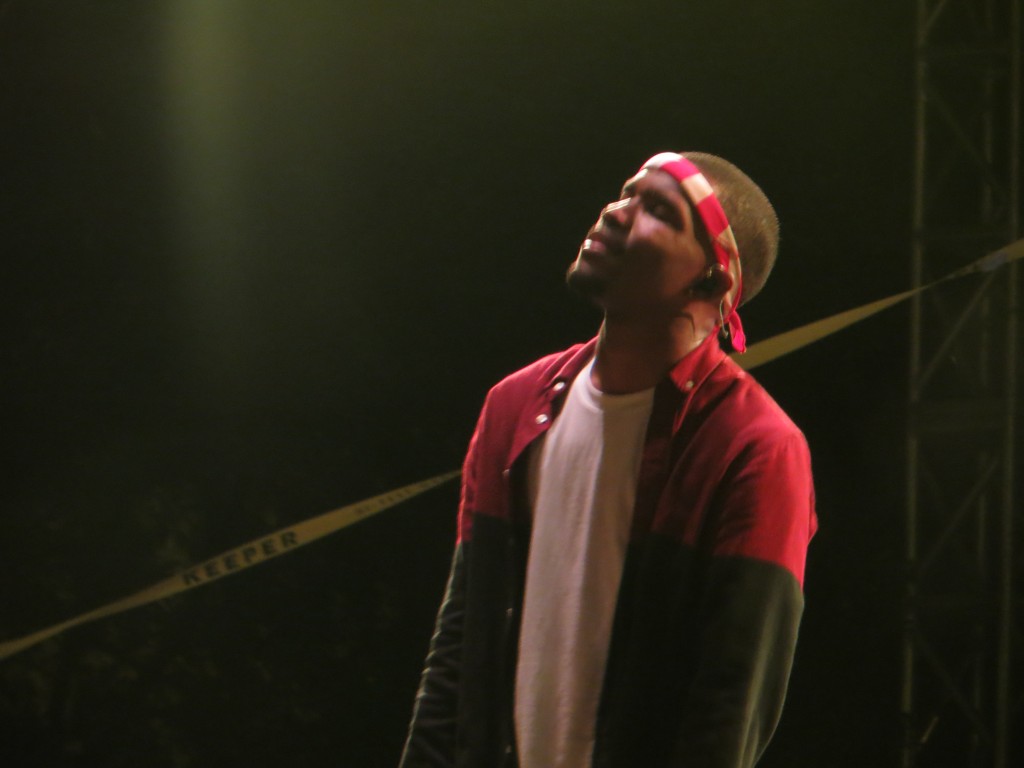 I knew that Frank Ocean would be good.  He just released channel ORANGE, his first full length album, which was hailed by pretty much everyone who listened to it.  I showed up an hour early, just to make sure I got a good spot, and even then, I was a solid 15-20 rows from the stage.  It didn’t matter, though, as Odd Future member Frank belted favorites from his first mixtape Nostalgia Ultra like “Novacane” and “Strawberry Swing”, as well as cuts from channel ORANGE including “Thinkin Bout You” and “Pyramids”, which ended Ocean’s hour-long set.  Additionally, Ocean’s stage effects were among the best of the day, including a giant video screen which displayed everything from multiple TV screens to a giant disco ball.  Ocean’s voice hit his high notes with ultimate precision, and glided through all of his songs without faltering once.  I am also glad he mixed Nostalgia Ultra with channel ORANGE, because he is just too good of a song-writer to neglect either.

Delta Spirit took the Bud Light stage by storm. They played a very sincere set and gave their all for every song. Lead singer Matthew Vasquez made a sarcastic comment about how cold it was in the city on this humid, mid 90 degree day, and complimented Chicago and the Midwest often between songs. Delta Spirit made the crowd roar when they performed Bushwick Blues. Vasquez made a point of trying to rile up the crowd and encourage participation throughout the show. Their setlist consisted mostly of songs from their new self-titled album. From start to finish, Delta Spirit didn’t fail to please.

I headed over to Sony stage early to see Neon Indian. They had a very promising set, playing music off of their latest album, EraExtraña, including Hex Girlfriend. Shortly after they began, word came down from above that they were to stop playing in ten minutes due to incoming bad weather. There were only a few gray clouds in the sky, but orders are orders. In response, Neon Indian delivered an amazing ten minute performance, ending with an intense rendition of Polish Girl. They reluctantly departed early, promising to make it up to the audience at a later date – an event I hope to be a part of.

In the aftermath of the downpour, I was confused about the schedule. Luckily, I ended up exactly where I wanted to be – at the Google Play stage for Twin Shadow. Washed Out had just finished their set, and I was able to muscle my way to close to the front. I was only about six rows from the stage before they started playing. The sound crew did a horrendous job setting up. It took them near forty-five minutes to get everything set up for the band. They failed at setting sound levels correctly, and the band had to constantly ask for adjustments. The crowd was getting visibly aggravated. Twin Shadow finally began playing after what had seemed like an eternity of sound checks. The weather had cooled after the rain, but it was still humid. I was in a sea of sweaty people, suffocating in the smoke-filled and sticky air, but it was worth every second. Twin Shadow delivered. They began with their song Five Seconds and, after a few more adjustments by the terrible sound crew, absolutely stunned the crowd all show long.

At this point in the night, the majority of people were muddy, sweaty, and worn out, but that didn’t stop an enormous mass of people from filling the giant field by the Red Bull Soundstage. The Red Hot Chili Peppers took to the stage amid deafening roars from the audience, and began with Monarchy of Roses from their new album, I’m With You. The band played with fervor and impressed me with their thunderous sound. They had some older classics mixed in with their new work, playing such hits as Otherside, Can’t Stop, and Suck My Kiss. The Chili Peppers gave a performance more than worthy of sitting through today’s thunderstorm.