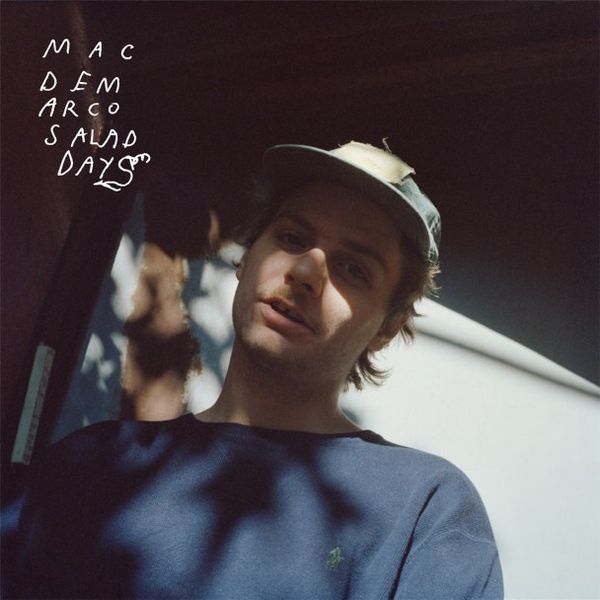 With his last album, 2 becoming one of the most surreal albums of 2012, Mac DeMarco had high expectations to live up to with his next solo album, Salad Days. Mac, one of the goofiest and quirkiest musicians in indie-rock today, appears to have taken a different approach with this album, while still managing to stick to his authentic, rugged sound. He’s still the same Mac that loves to get publically naked and shove a drumstick up his butt, but somehow this album deviates from his jackass personality and sprouts heartfelt ballads that show the beginnings of Mac DeMarco actually growing up. Still incorporating his ironic comedy and crafty demeanor, Salad Days tours a series of songs that revel some serious emotions out of DeMarco. Many themes of adoration, sorrow, and the realization that growing old is inevitable, are blatantly apparent in the album, allowing DeMarco to unleash the realness and honesty that encompasses his life at this point in time.

After touring with Phoenix last year, DeMarco found himself performing in big-time arenas that he never quite imagined happening that quickly in his career. In a sense, this was his big break through, even if it wasn’t exactly targeted to the right crowd. The world got a little taste of the gapped-tooth, Canadian performer who has clearly not escaped his youth yet. Through endless public nudity, song covers with lyrics altered to incorporate excessive profanities, and the blatant drunkenness on stage, DeMarco developed a following of people in support of his bold recklessness. Even if you don’t agree with his actions, publicity is publicity, and he’s still one of the only artists in the industry today that is demanding attention by sticking to his carefree attitude and doing everything solely just because he can. From wearing girl’s lipstick, to creating secret music videos with Tyler, the Creator, Mac DeMarco is essentially a punk who is completely unpredictable and acting just for the hell of it; it doesn’t get more refreshing than that.

Although he seems like one of those kids who just can’t be tamed, Mac knows when to put the shenanigans aside and devote serious time to creating notable artwork, and Salad Days bares just that. Through his crooked guitar, scratchy punk tones, and vocal personality, Mac has gained much recognition over the years for being able to successfully pull the off the collaboration thoroughly.

The album opens up with the title track, which embodies the themes that run through the whole album. He no longer speaks through ambiguous lyrics, instead he speaks about life exactly how it is. With a stinging chord progressions that matches the pitch of the words, DeMarco sings lyrics such as, “acting like my life is already over” and “act you age and try another year,” a seemingly depressing song but in reality it’s more of a boast of maturity. This whole growing-up thing must have really startled DeMarco because it’s a reoccurring matter throughout the album, and quite frankly, it’s something that I never thought I’d hear from the deviant performer. Not that the old Mac is gone, it’s more of graduation to his next track in life.

One of the hit singles, “Brother” begins with a daydream guitar riff that transcends you into psychedelic journey that could be as ambient or destructive as you so choose. The beauty of DeMarco’s pitchy tunings and matchless chord patterns is that you have no choice but to applaud him for the way he manages to shape them into a masterpiece of haphazard sound. The whole album comes off as more of a stroll through the park, a harmonious blend of noise that is much of a surprise as it is pleasant.

Songs like “Let My Baby Stay” and “Treat Her Better” reveals a personal side of DeMarco, one that divulges into his intimate relationship with current girlfriend, Kiera McNally, and his gentlemen style outlook on other personal relationships. Both songs have very mellow rhythms and stray away from his classic pitchy guitar riffs and fast-pace chromatic fills. Singing “Treat her better boy/if having her in your life is something that you enjoy”, DeMarco unleashes a sincere life message to all the heartbreaker boys in the world that he probably once was himself. These songs are hopelessly romantic, in the vein of “Still Together” or “My Kind of Woman”, and both songs dive into catchy choruses and relatable lyrics that leave an impeccable mark in your memory.

Salad Days is still home to DeMarco’s trademark grotesque guitar that can be comparable to a swarm of angry bees or a bunch of wind chimes falling down the stairs, in the most musical way possible that is. Songs like “Go Easy” present just that, with random flares of sound over the complicated sequence of chords that has advanced both rhythmically and dynamically since his bleak garage band sound in 2.

“Passing Out Pieces” is the most dampening track on the album. Placed halfway through the album, it’s a smooth balance of the sad realization of his regretful past lyrically and a tasteful incorporation of bouncing keyboards rhythmically. You could listen to the musicality of this song and never really grasp the disheartening words he’s saying. The tune emphasizes lyrics like, “What Mom don’t know has taken its toll on me/It’s all I’ve seen that can’t be wiped clean/It’s hard to believe what it’s made of me.” Essentially this song describes DeMarco perfectly: playful out the outside and defeated on the inside. It’s not to say that Mac goes home and cries himself to sleep, it’s more of a realization of his past mistakes that he cannot reconcile, making it time to reinvent himself for the future.

Mac has truly tightened up the screws with this album and still shows off his innate talent to create music that is unlike the repetitive styles that are continuously made popular today. Although the album doesn’t scream reckless abandon like we all imagined it would, it’s still refreshing to hear that DeMarco is human just like the rest of us and sometimes you just got to bite the bullet and grow up.